The first company of house Luton trained in the new mobile doctorine have finished their training. After months of training in embarking and dissembarking. How to provide rolling artillery covarge to advancing troop carriers. When to not charge the cavalry headless against the enemy. There is one more baptise in fire to pass. A field training against the Blood Angles. Only after this the troop will be considered ready for battle.

The armies deploy on the outside of a ruined village. The battle judgedes take position and the training begins. 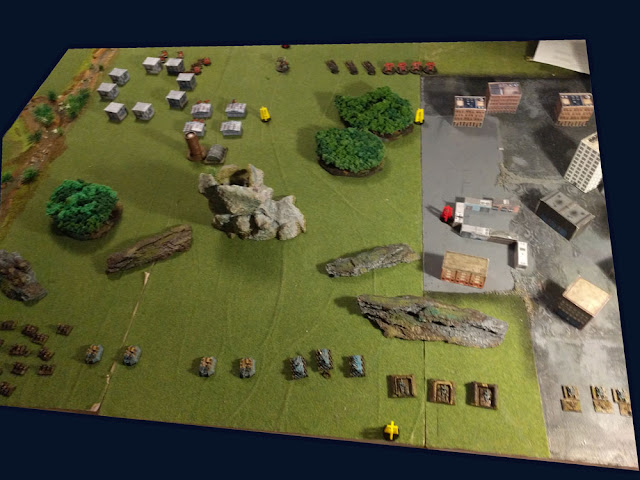 The scouts double forward and hides behind some small buildings.

The Earthshakers initiate an artillery duel and sustain fire at the Whirlwinds and neutralising two of them before they have a chance to strike.

This force the Whirlwinds to marshal and move forward to compensate for their short range.

The infantry company double forward in their troop carriers  trying to hide behind the mountain. But they fail. The warhound sees an opening and advance while firing all its weapons on one of the troop carriers. The huge tank rocks back and forth but in the end only one hit is considered to be damaging.

On the other side of the tall mountain doubles the heavy tanks towards the space marine lines finding a line of fire to the scouts hiding behind the buildings. Their long range battle cannons put one unit and a rhino out of action. 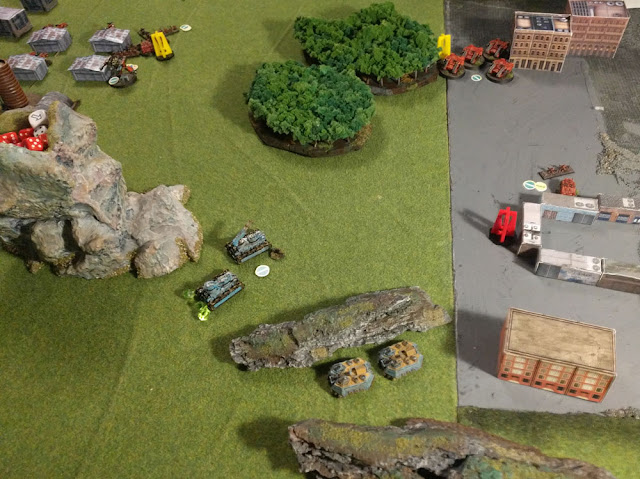 The heavy tanks has managed to get exposed to space marine counter attack that comes in the form of the advancing Land Raiders that get clear shoots with their laser cannons. One of the hits is judged so precise that it directly disable one of the tanks.

The light artillery sustain fire at the spotted scouts. A lot of the grenades strikes true and two of the scouts units are out of action and the remaining are considered to be broken.

The devastators double with full speed and fire at the heavy tanks but fail to do any clear hits.

The Luton HQ also double following a path between two hills getting reasonable cover from most Blood Angle units.

The tactical company follow the devastator example and double forward but also fail to do any damage on heavy tanks. 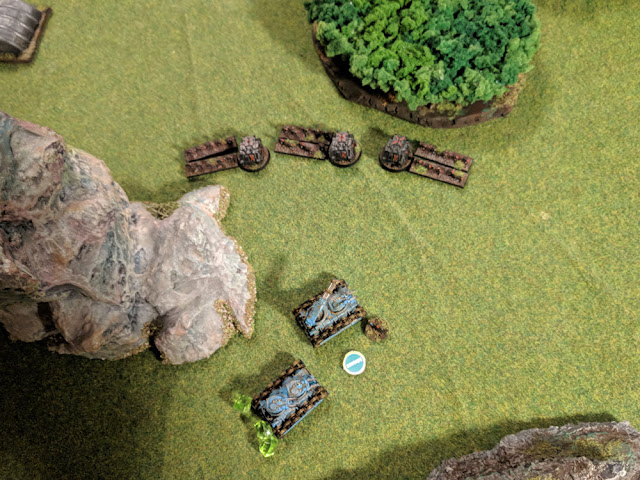 The cavalry on the left flank trots forward at double speed to get into charge range. 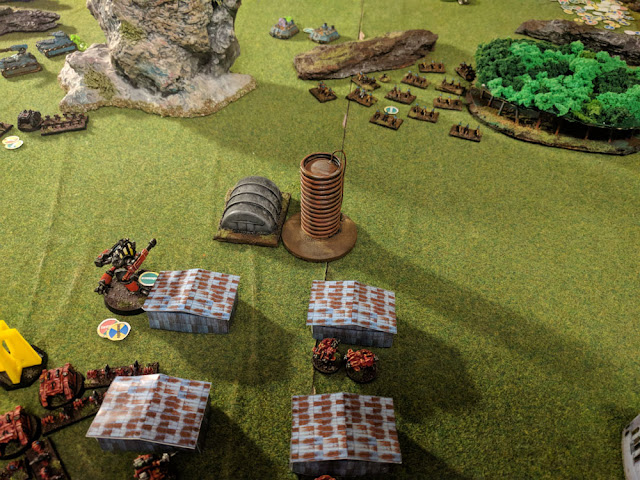 Finally the landspeeders zoom forward towards the cavalry, taking out four units of them with their multimeltas.


The scouts and death riders fail to rally. The rest of the units succeeds. 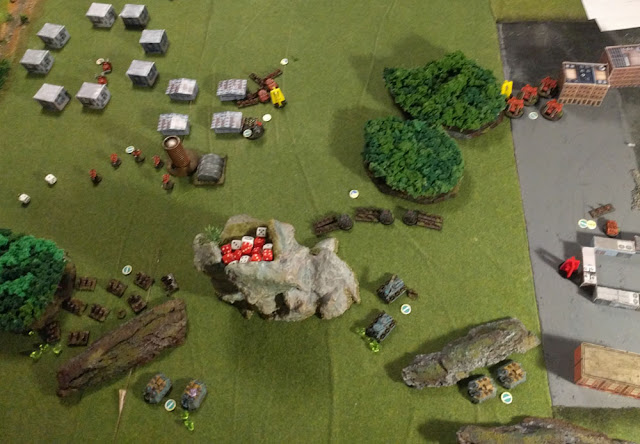 Suddenly in a strange crackling energy sphere a unit of terminators appear behind the Luton lines just beside their heavy artillery. 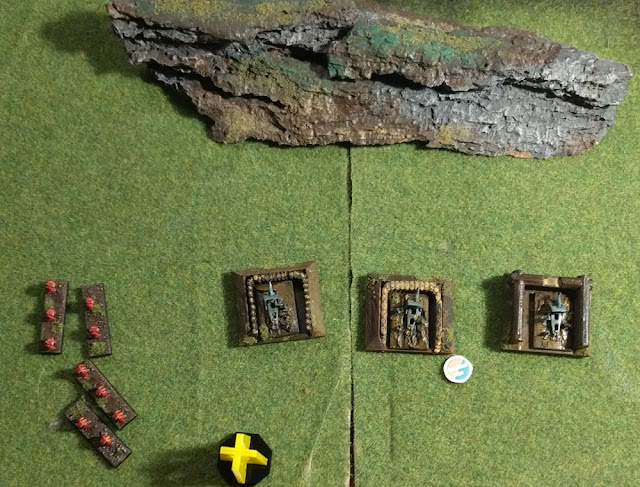 The space marines immediately takes imitative and the terminators assault the artillery and the whole unit is taken out of action. However the crew of the gun furthest away from the terminators manage to turn the huge gun and fire direct fire right into the terminator company and one unit of the terminators was also disabled. This would be wildly celebrated at the pub later that evening.

The Blood angles try to follow up by deadly fire from the Whirlwinds but the communication failed and they where instead forced to regroup. 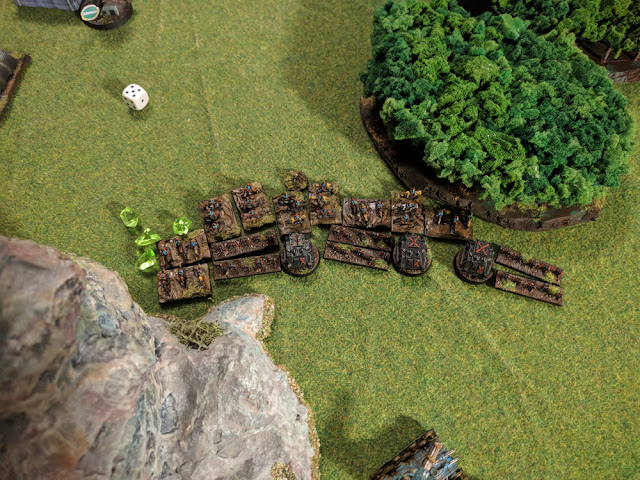 The now decimated cavalry company charge the tactical company. But laces are not effective against power armour. Only the front unit of space marines is removed from action while the response fire halt the entire charge. Directly disabling tree units of cavalry. Then the catastrophe hits when the unwieldy unit is trying to turn around and regroup. Horses tripping over each other while the space marines is pounding in bullet after bullet in the mess of horses and men. The entire company is removed except the commissar and his bodyguard who manage to navigate out of reach from the space marines.

The heavy tanks on the other side of the tactical company retains the initiative and are a bit more lucky in their shooting and disable two tactical units.

The warhound remain in place and sustain fire with the megabolter, while the plasma gun is cooling down, at the approaching troop carriers. But none of the hits are considered to be accurate enough to cause any damge. 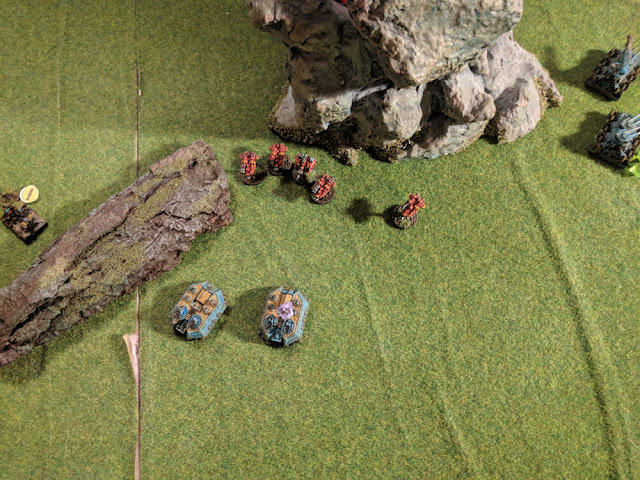 The Blood angles instead order the Landspeeders to take out the infantry carriers. They advance and cover the side of one of the carriers in deadly melta shoots. But the fortune is on the Luton side since only one of the hits is a penetrating one and the carriers is still in operation. 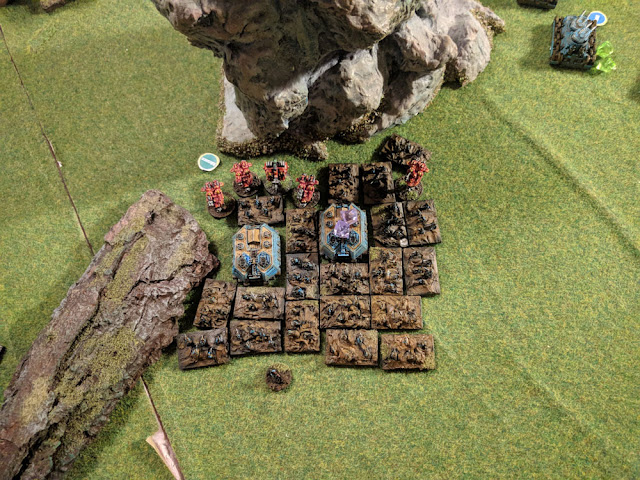 The infantry commander realise that the carriers won't take more of this and order the men to disembark and engage the land speeders. The hail of las-shoots make sure to ground the Landspeeders for the remainder of the battle.

The tactical company advance and cleavery block the way for the Luton HQ. While the devastators press on trying to take out the remaining heavy tanks but fails.

The Luton HQ has no other choice than to engage the tactical company if they want to be able to continue to advance. The manage to dispatch the company with minimal losses. 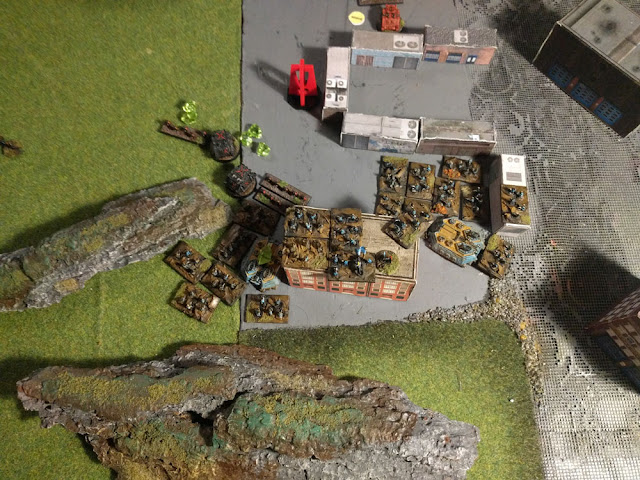 Across the field the Land Raiders advance and fire at the heavy tanks. This time damage one of them and the amount of fire is enough now and they break and fall back.

On the Luton right flank the light artillery now alone face the advancing terminators. They fire all they have at them. Manage to disable another unit of them and the terminators are forced to break and retreat.


Scout and Heavy Tanks fail to rally the rest succeed. 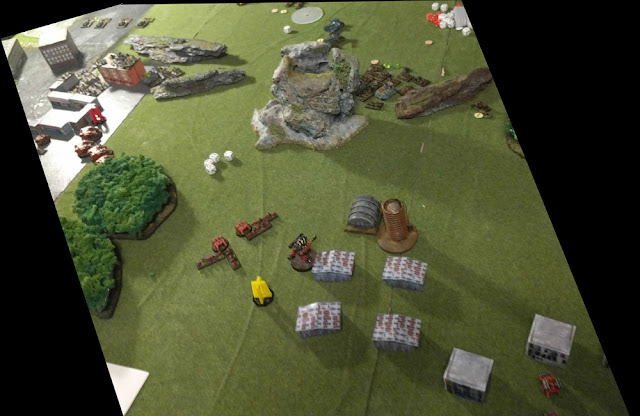 The Land Raiders are now having a clear field of fire to a big part of the Luton HQ. They remain in place and sustain fire at them. Almost destroying one of the troop carriers and immobilise it but only manage to disable one infantry unit.

The terminators retain the initiative and advance while fire at the light art. But they are still shaky after just having regrouped and miss all thier shoots.

The Luton infantry company need to press on. They double forward. Unfortunately not being able to reach engage distance of any of the space marines units and instead letting the troop carriers heavier weapons fire at the devastator without doing any damage. 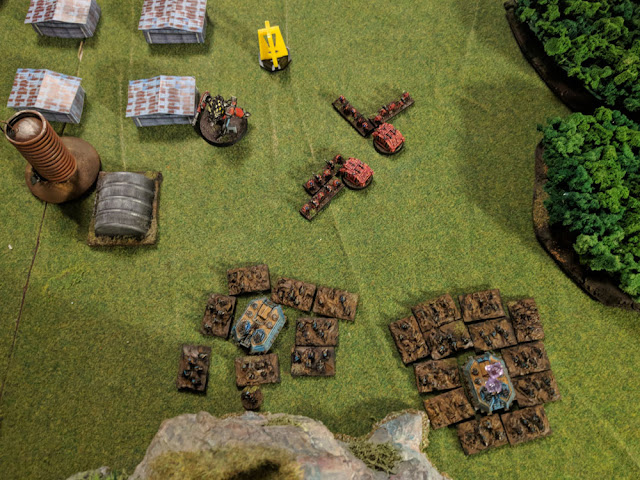 The warhound fire all it has at the remaining cavalry unit that had been put back in order by its commissar. Removing the last traces of horses from the battle.

The light artillery advance to trying to secure the objective while firing at the terminators without doing any damage.

On the space marine left flank the Whirlwinds double forward, securing the objective in the stream. It also fire some rocket on the move at the broken heavy tanks. All miss but the experience of being under fire again breaks one of the tank crews spirit and they evacuate the tank and runs for the hills. They where later severely punished by the tank unit commissar and is no longer a tank crew, instead are they latrine crew for life. 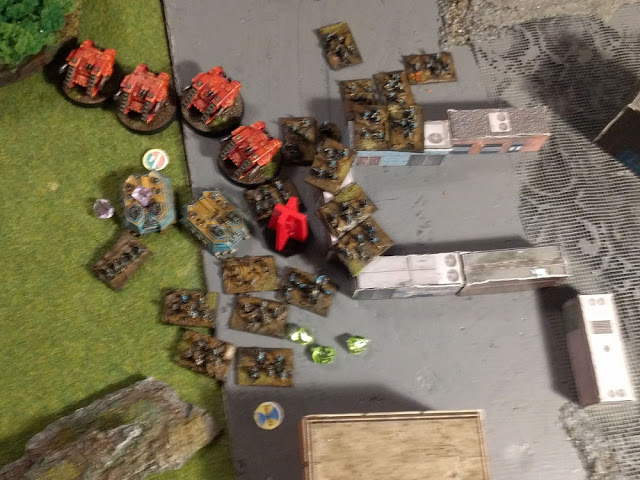 The Luton HQ engage the nearby Land Raiders. Swarming the tanks in close combat firing into hatches and placing grenades on the tracks. One of the Land raiders is imminently ruled out of action and another as it doesn't manage to retreat.

It is now time for the devastator to return fire at the infantry company and they do it with pin point accuracy. Five more units is out of action.

No winning conditions are reached by either side and the battle continues.
The Luton HQ fail to rally the rest succeed. 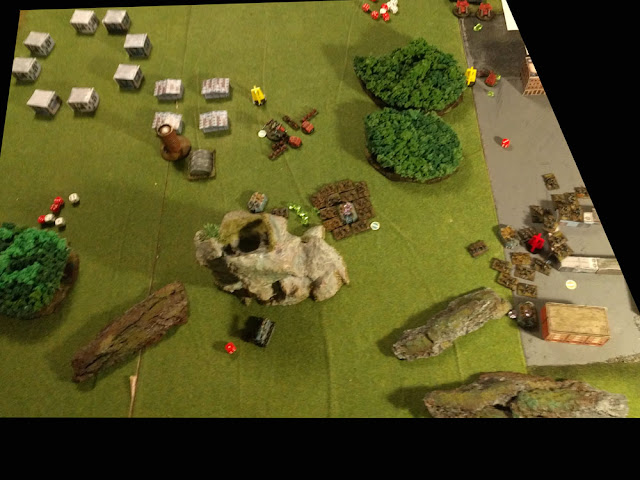 Sitting safe at the objective at the stream ever since the last cavalry unit was out of the battle the Whirlwind could sustain fire at the infantry company that only is saved by being able to take cover behind the massive troop carriers and only loose three units. 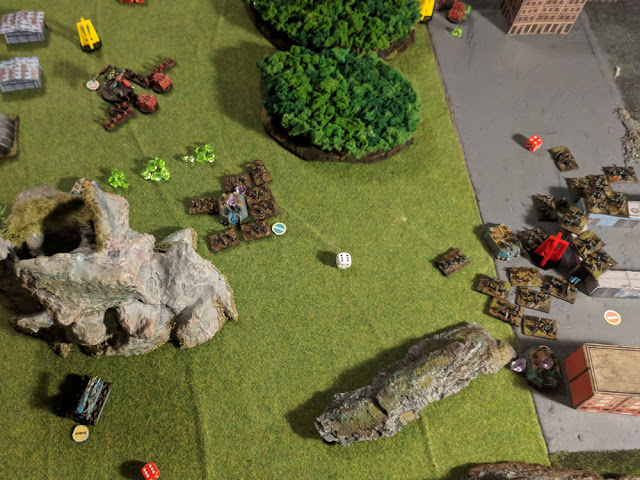 But more pressing issues need to be taken care of by house Luton. The regrouped terminators can not be allowed to take control of the rear objective. The light artillery sustain fire at them and manage to disable another unit of terminators breaking them again removing the threat. 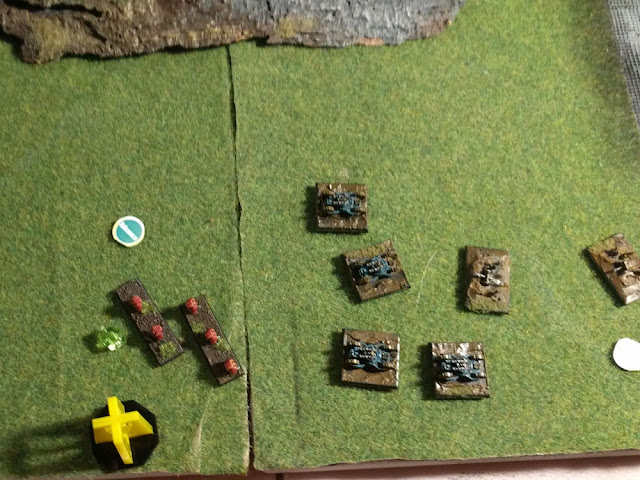 The devastator double forwards in hope of trying to block the Luton HQ and disable one of its infantry units while doing so.

The HQ engage the blocking devastators. They manage to remove one Rhino and three units of them while themself only loosing three units. However the morale of the infantry is low and the rear rows start to retreat, dragging the rest of them with them in a general route. The space marines manage to roll a six on the combat resolution while the HQ only rolled a three having them loose with least possible margin.

With the HQ on the run the battle is over. The scouts advance a bit trying to put a final infantry man out of action but miss. 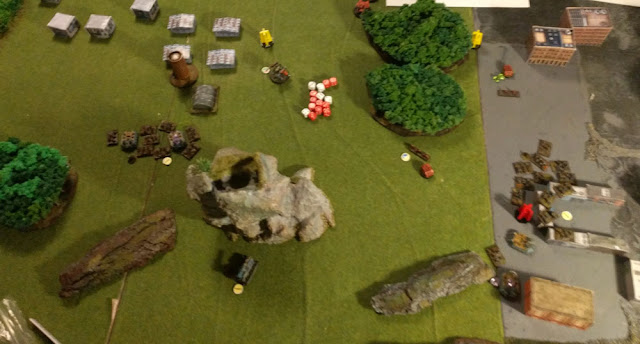 The victory goes to the space marines. They shall not pass and Take and hold.

The training battle is considered a great success. Only a few casualties on the Luton side most of them happened during the cavalry route. Nobody could expect a group of freshly trained farmest to be able to beat the emperors finest warriors. Except maybe General Almund Garnif that had secretly hoped that his recruits would bring his fortune back to him. Nevertheless they are considered battle worthy and ready to face the orks.

There is a lot to learn of how to handle the slow moving Gorgons and when to march and when to engage. The death riders was a disappointment, the plan of a huge board full of charging cavalry might have to be postponed.