The Varyan Guard was originally named The Huscarls and are believed to be founded during the seventeen founding with gene seed from the White Scars. Their original purpose was to reinforce the defence in the southern areas around the Maelstorm and as such their home planet was Garden of Mickle at the edge of the Maelstorm. Nevertheless sometime during M36 the Garden of Mickle was overrun by the forces of chaos and the surviving Huscarls were forced to become a fleet based chapter.

Failed in their mission the Huscarls considered themself without honour and in a effort to regain some of it they started a rentless war against any taint of chaos they could find regardless of losses and without taking time to restore their forces. Their numbers where quickly dwindling and in the end only the cruiser Mumin and less then a company remained of the once so proud chapter. It was at that time the Wolf Lord Varyan approached the chapter with a proposition. He and his Company was to undertake an expedition into the Eye of terror trying to find a trail of Russ. And he needed men with nothing to loose to follow him. Recognising the honour of the Huscarls and their fiercely hatred of chaos he gave them a purpose.

The mission took over a decade and was in the end a failure. But it gave the Huscarls a purpose again. The few that remained renamed themself The Varyan Guard and started to assembled new recruits from feral planets around the galaxy.  Only recruiting candidates that is ready to die for their honour. They also reformed the chapter more to the like of the Space Wolf, donning huge power axes and dressing themself i fur and fangs. 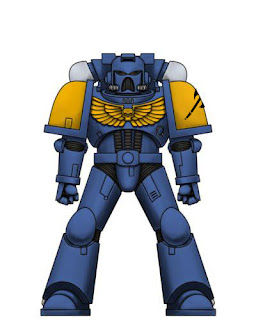 The current state of the Varyan Guard is good, they has rebuilt their fleet and is now roaming the galaxy, often divided into smaller fleets, looking for honourable fights wherever there is an ongoing strife and possible recruiters on all planets they pass. They often show up without a warning in a warzone, land where the fighting is the heaviest, test their strength against the enemy and disappear when they loose interest. Often long before the war is won. They no longer follow they Codex Astartes strict and there is suspicion that they have recruited more than their allowed numbers. But since they are constant moving and often divided it has been hard for any Inquisitor to start an investigation.
Posted by Peta at 1:05 AM