With the ork threat confined the imperial forces has time to deal with the first and second legions of the Steel eagles that deserted before the offensive against the orks. The legions has maintained radio silence since they deserted so the Empire had to rely on reports from the local population and a squadron of thunderbolts performing aerial reconnaissance to located the traitors. Finally a company from the first legion was discovered in the Hammer Mountain, not far from the ork lines in the north. Captain Harianus of the Blood Angels immediately ordered one company of Space Marines to intercept the company and punish the traitors.

The Blood angels surprise the Steel Eagles when they travel along a road in a valley in the Hammer mountains. The Blood Angels has their blitz behind a small forest and the two objectives close to the Steel Eagles blitz that is placed at the middle of the road. The Steel Eagles has spread out their objectives, one on each side.

The first troop of the Blood Angels that reach the field is the land speeders that garrison close to some storage houses. The Steel Eagles has an infantry company together with the rough riders garrisoned in the hills to their left and the sentinels to protect their right. 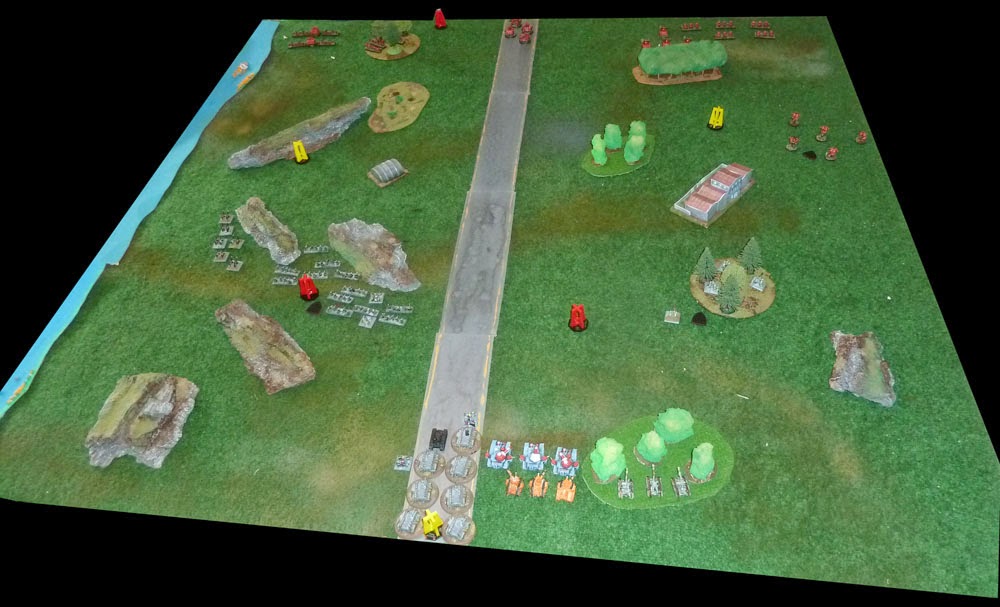 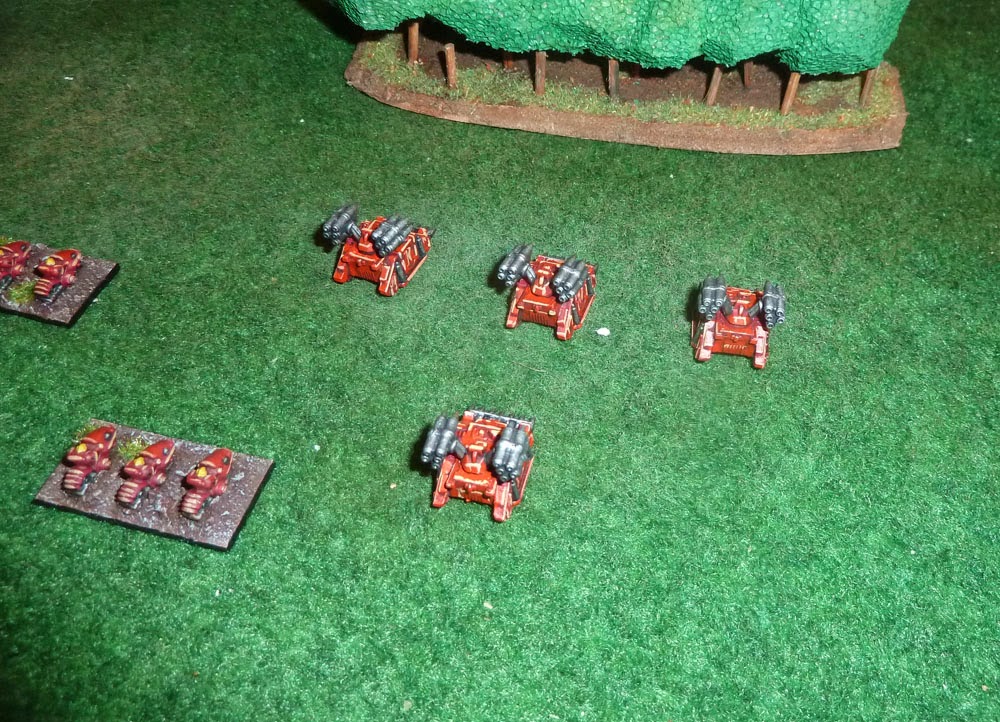 They start by letting the Whirlwinds put down a furious barrage on the poor infantry hiding in the hills hoping to rout them out. But only manage to kill four units, but among them the company commander and commissar.

The Steel Eagles Basilisks return fire at the Predators but fail to do any damages. 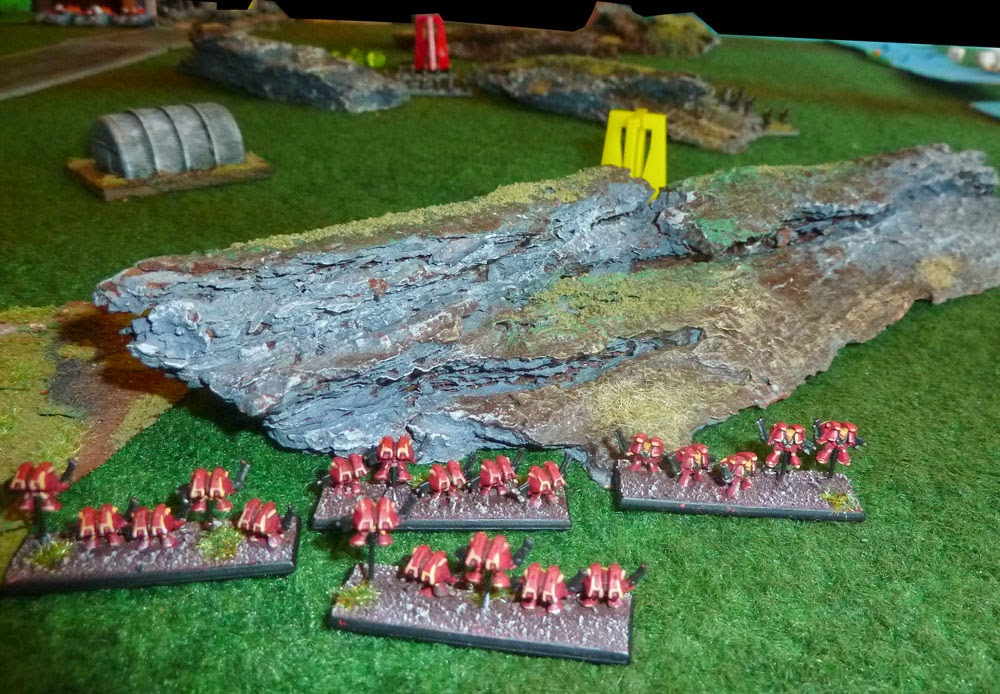 On the other side of the field the Assault detachment advance closer to the enemy. Hiding behind a hill but in jump range of both the infantry company and the Rough Riders. 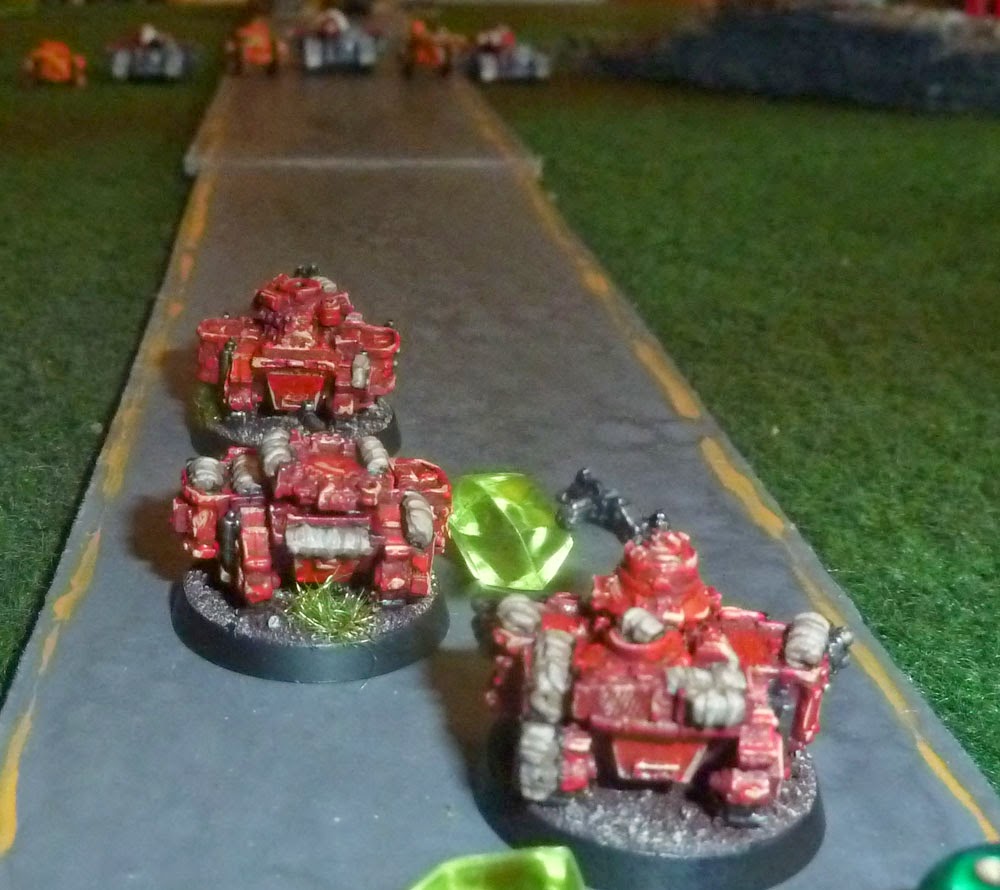 Along the road the Super Heavies advance and fire all their big guns that now is in range on the predators, kill one.

The Predators advance and fire back at the Super Heavies with their laser cannons landing quite a few hits but all bounce of the reinforced armour of the Russes.

Instead they attract the attention of the Regimental HQ that double up the field and fire all their autocannons and multilasers at the Predators. Destroying every one of them. A smile could be seen on the commanders stoneface. 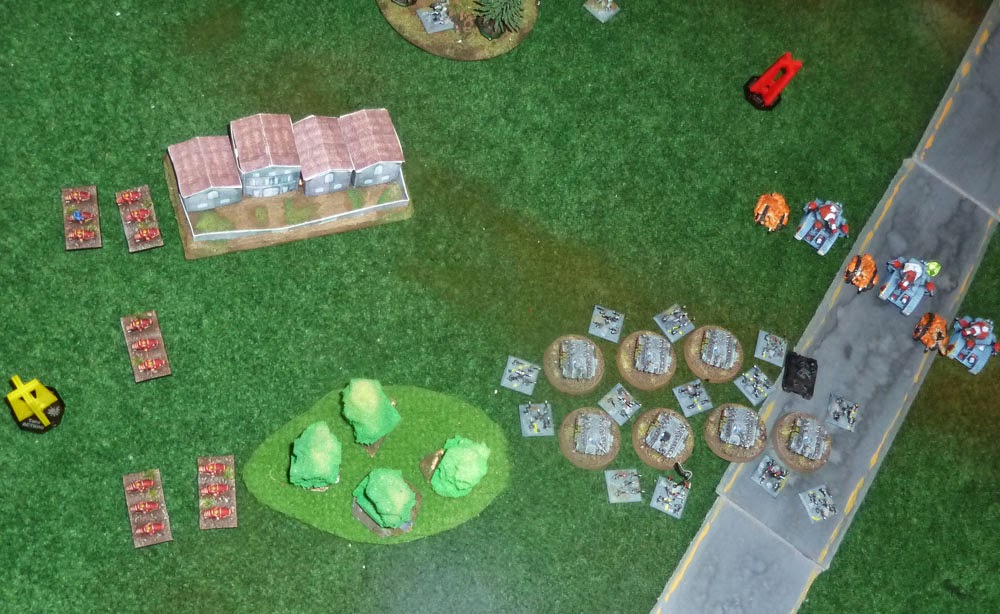 The Blood Angels answer with letting their bikes double toward the Regimental HQ, getting into assault range.

Meanwhile did the infantry company in the hill regroup, removing all blast markers from the earlier bombardment and tried to get the men in better coverage. 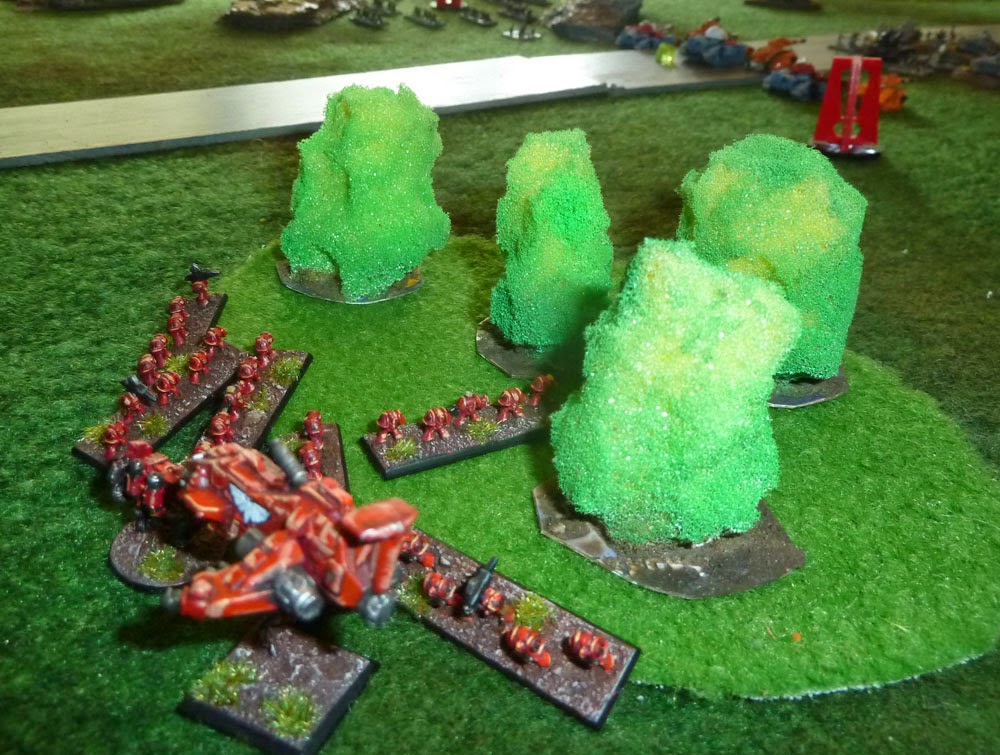 But to late does 'Stiff upper lip' Hessen realize that the Predators was nothing but a decoy to fool him to advance his troops. Thereby leaving his artillery unprotected by his Hydra. With a roar a thunderhawk cross the sky and drop of a detachment of Tactical marines supported by a dreadnought just by the basilisks. Before the artillerist had time to react the marines are all over the tanks. Killing the crew and putting demolition charges on the hulls. Seconds later only three smoking hulls remains of the Basilisks.

'Stiff upper lip' Hessen had to face that he must fight the rest of the battle without artillery support. The most important now is to protect the HQ. He order the sentinels to advance to screen the HQ from the Blood Angels bikes and fire all their guns, that all however miss their targets.

As a response the Blood Angels let their land speeders advance and fire at the screen of protective Sentinels. Killing two of them and break the group.

The Rough riders is ordered to march to the back of the field and stage a counter assault on the threatening tactical detachment.

With the threat of the Rough Riders galloping away the devastator detachment dares to enter the hills and double up in fire range of the infantry company. Killing three units. 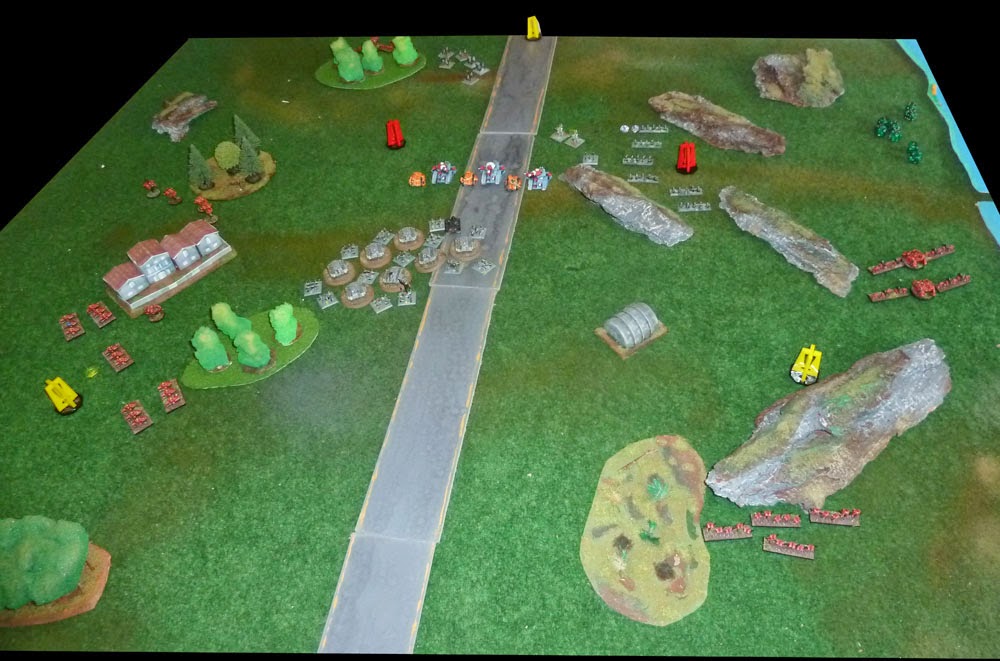 The Bikes fail to rally.
The Infantry company, the Super Heavies and the Sentinels does however succeed.

The game is still at balance. The Steel Eagles dominate the centre massively with both the Super heavy tank company and the Regimental HQ. Anything the Blood Angles has tried to throw at them they just shrug off. The Blood Angels on the other hand dominate the flanks. Forcing the Steel Eagles to react to their actions. Trying to give the lethal Baneblades as little as possible to fire at.

They start with sustained fire by the whirlwinds on the tightly clustered Regimental HQ hoping to do considerable damage. But only kill three infantry units, including the commissar, and a chimera. Leaving the HQ almost undamaged and in a position to reach the Blood Angle rear if it want to. Chaplain Moghart start to wonder if the flanking strategy was a good one in this case. 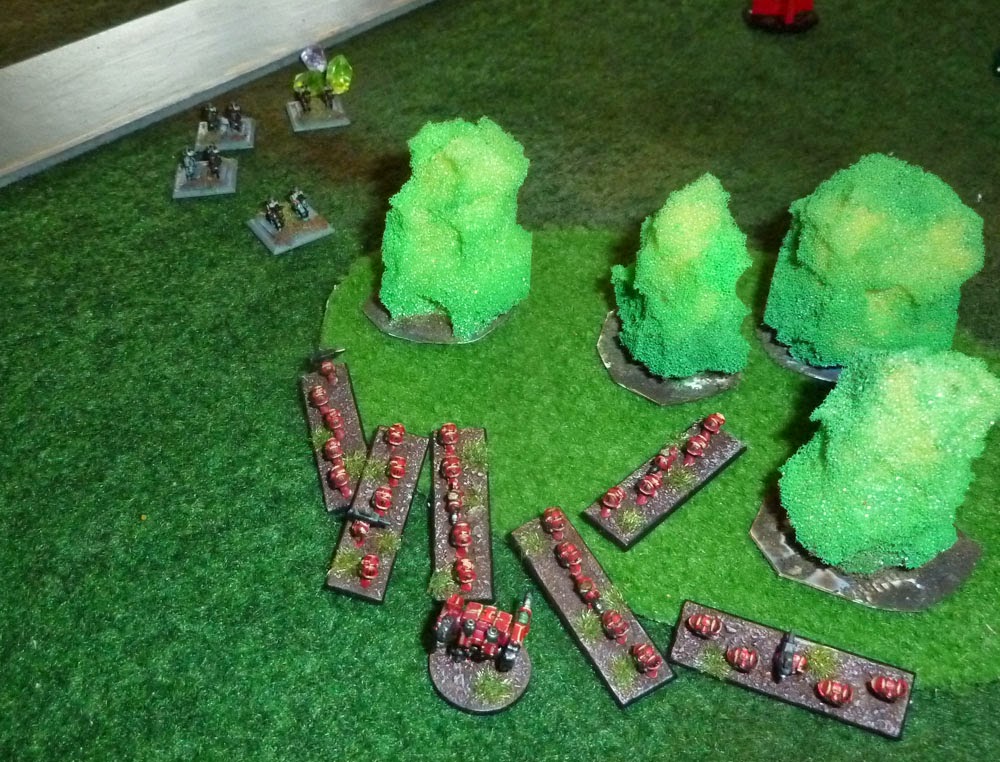 On the other side of the battlefield the Tacticals retain the initiative and sustain fire at the nearby Rough Riders. Killing two, one short of breaking them. The tacticals brace for a charge.

The Rough riders storm into the tactical ranks. But their strong armour reflected most of the rough rider lances. And only two units of space marines was run down before the last Rough rider succumb to the marine bolt pistols. 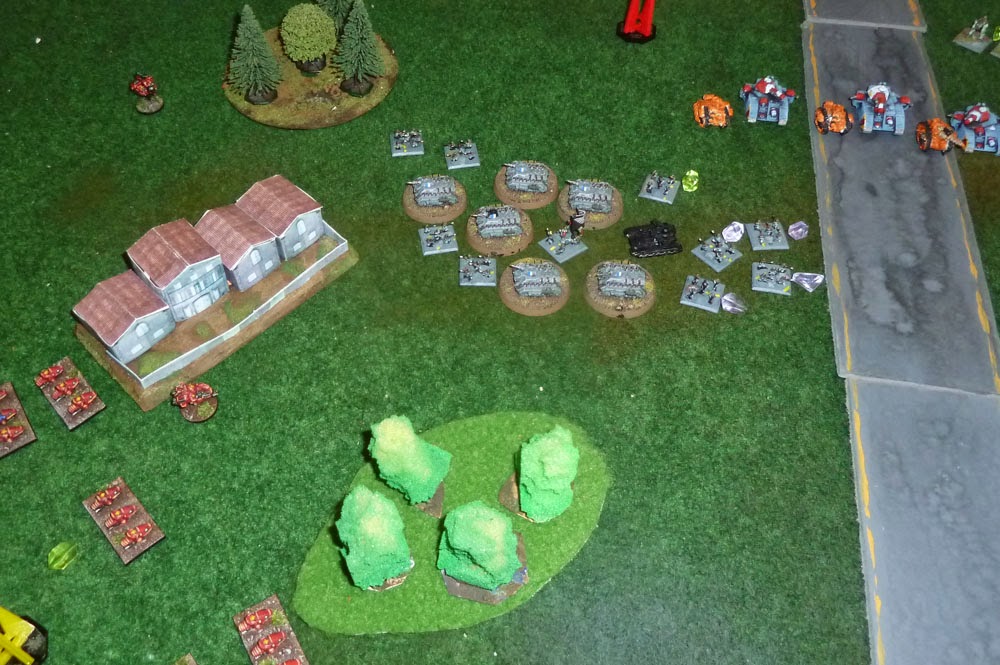 While the tacticals fight for their life 'Stiff upper lip' Hessen has grown irritated on the nearby land speeders zooming around his troop and order his men to 'Bring those big flies down'. But the speeders are hard to hit and even though they take a lot of fire from both autocannons as well as chimera heavy bolters and multilasers. Only three crash to the ground. The remaining two breaks and flee behind a small hill.

In the hills can the devastators advance to get a better line of fire on the infantry company and kill two units with their missiles breaking them and they flee to their rear. 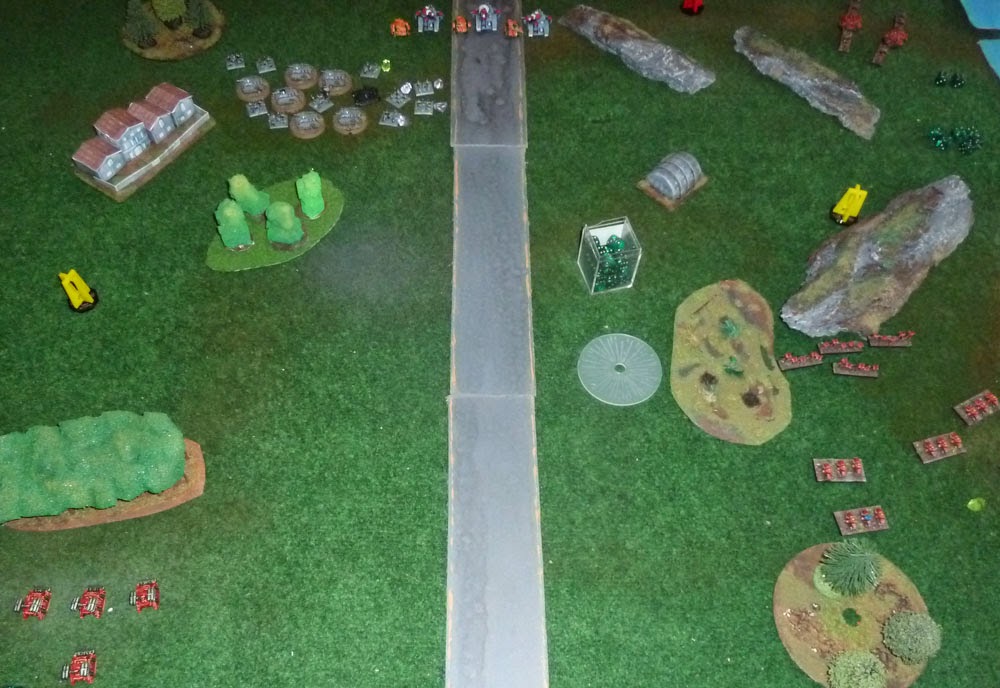 The bikes has seen the fate of the land speeder and double from the left to the protective hills to the right. Leaving the Blood Angel left dangerously unprotected.

The Sentinels try to protect that flank from the amassing Blood Angels, advance and fire at the devastators but do no damage.

Then the thunderhawk once again enter the battlefield going on the side of the field to avoid the hydra and assault the fleeing infantry company in the Steel Eagles rear. Killing and routing all remaining units. 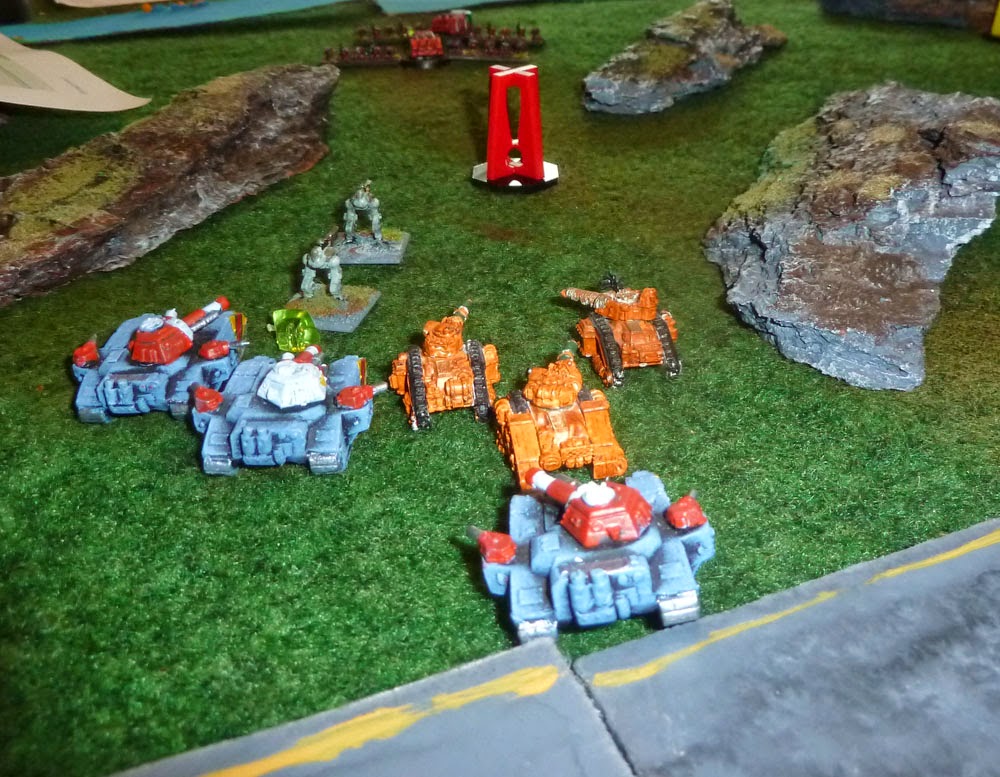 The Super Heavies are forced to halt their advance and response to the threat on their left flank. Advancing
into the hills and fire at the devastators. Destroying both their Rhinos and killing two units of devastators. Breaking the detachment and they flee back behind a hill nearby an objective. 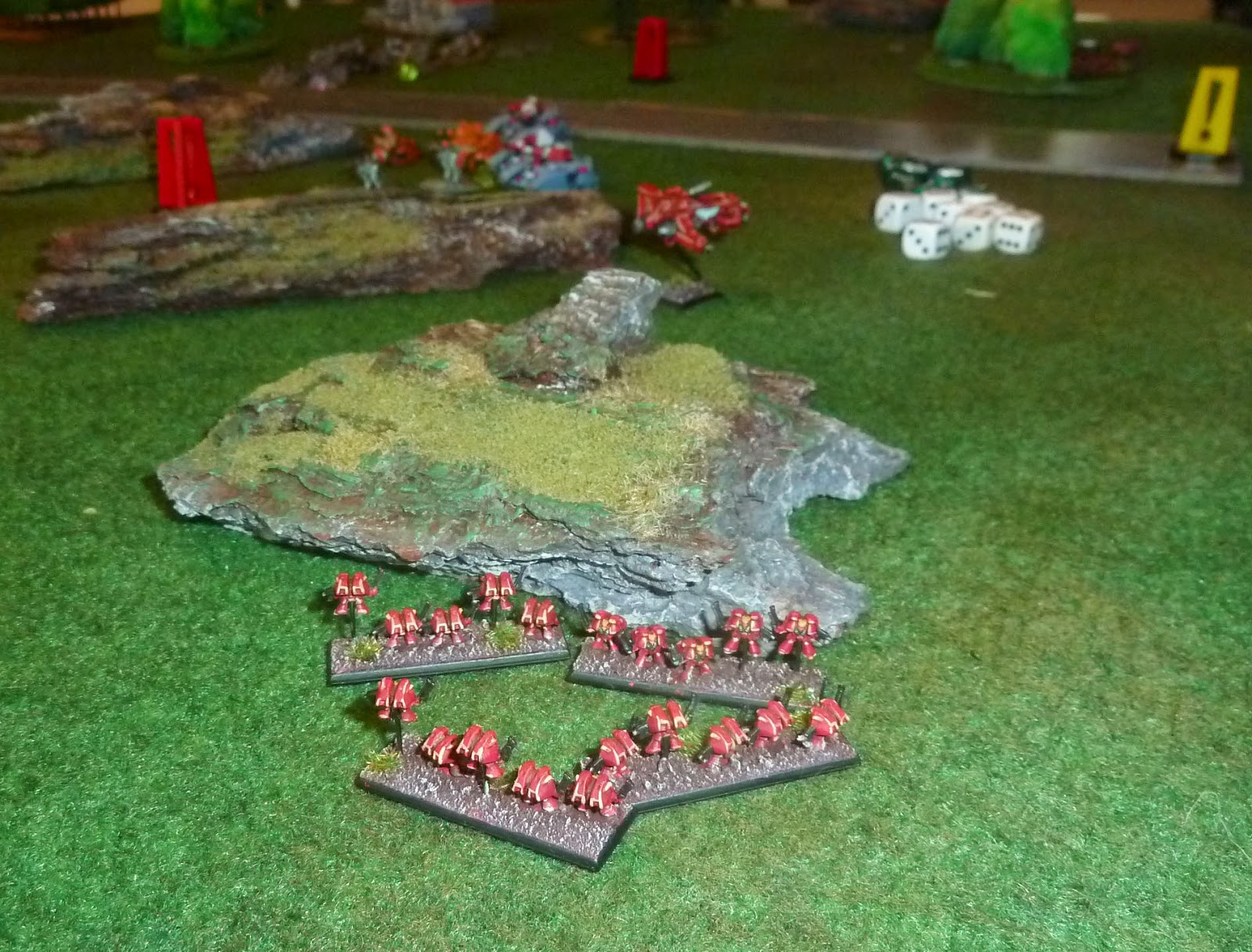 To increase the pressure on the right flank the Assault detachment march across the entire battlefield with long jumps by their jump packs. Taking cover behind a hill on the Steel Eagle edge close to the Steel Eagle blitz objective. 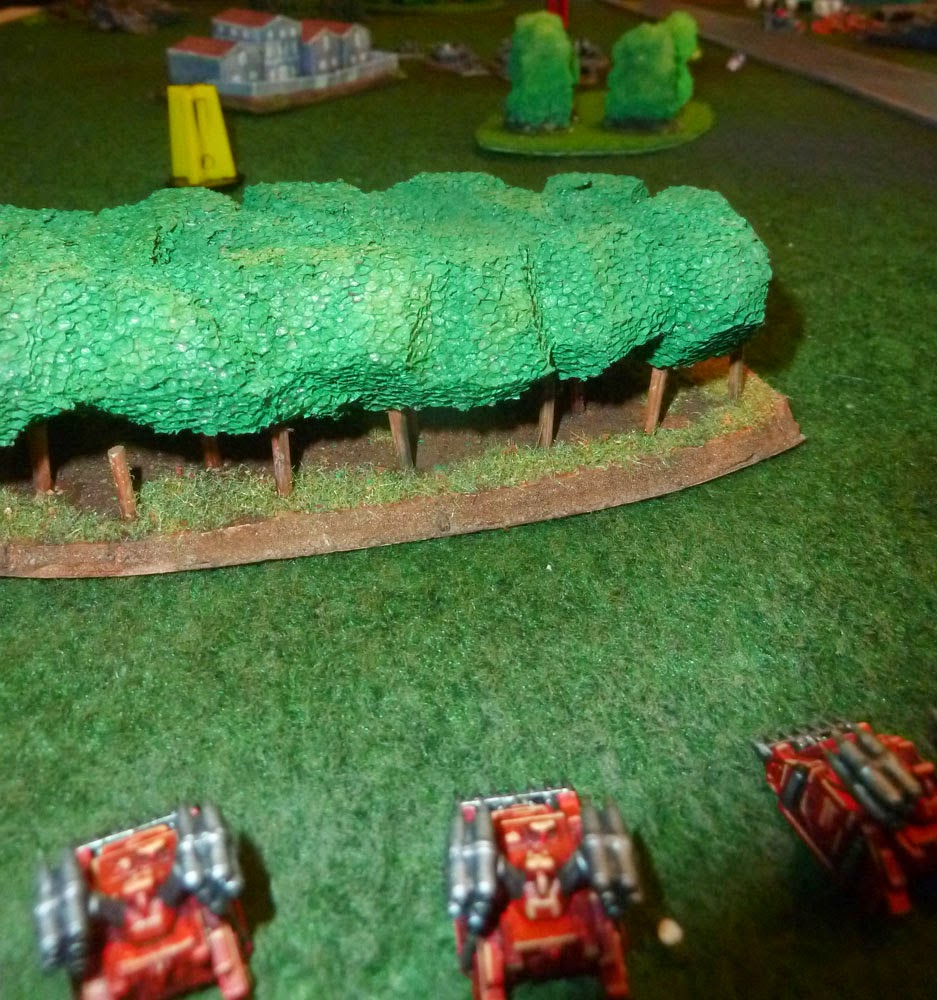 The Whirlwinds continue their sustained fire at the Regimental HQ. This time killing four infantry units and the pesky hydra. The losses is now starting to take its toll on the HQ.

But behind the Regimental HQ the Super Heavy tanks advance and fire all their guns at the tactical detachment in the forest. The hail of fire kill every one of the space marines. But fortunately couldn't any of the tanks get a clear shoot at the dreadnought that was lumbering on the other side of the forest. The lone dreadnought flees behind the same hills that the land speeders has taken cover behind. Thereby, by shear luck denies the Steel Eagles Breaking the Marine Spirit.

The sentinels retain and advance to fire at the assault detachment but the distance is to far and all shoots miss. 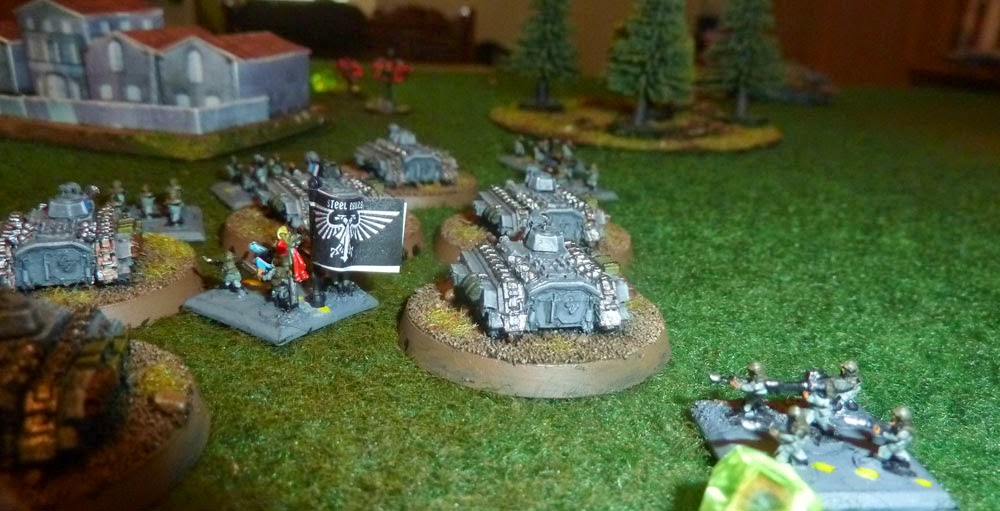 On the other side the Blood Angel land speeders advance foolishly on the Regimental HQ but fail to do any damage putting them in a dangerously exposed position.

The real reason for the headlong advance was not however to do any damage but to pin the Regimental HQ on spot. 'Stiff upper lip' Hessen took the bate and regroup his company and fire at the land speeder instead of trying to advance to secure objectives. They kill all the speeders but remain in place. 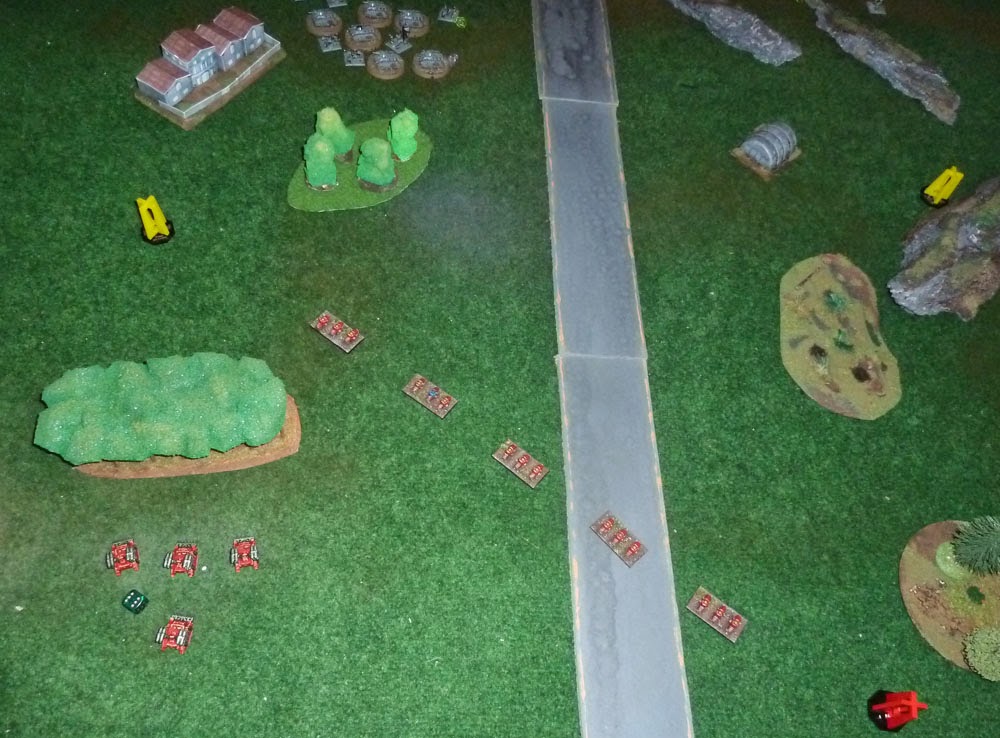 This give the Blood Angels the possibility to surround the Steel Eagles. The bikes doubles and secure two
objectives by stretching out.

On the other side the devastators advance and fire at the sentinels. Breaking them. Leaving the field for the assault detachment to advance and secure the objective the sentinels was guarding.

'Stiff upper lip' Realize that the battle is lost and order his remaining Regimental HQ to retreat fastest possible while the Super Heavy tanks cover the retreat. The remaining troops are lost and survivors are taken prisoner to be taken back to Hive Agnebergus to be interrogated by Commissar-General Baruccus Ludius. 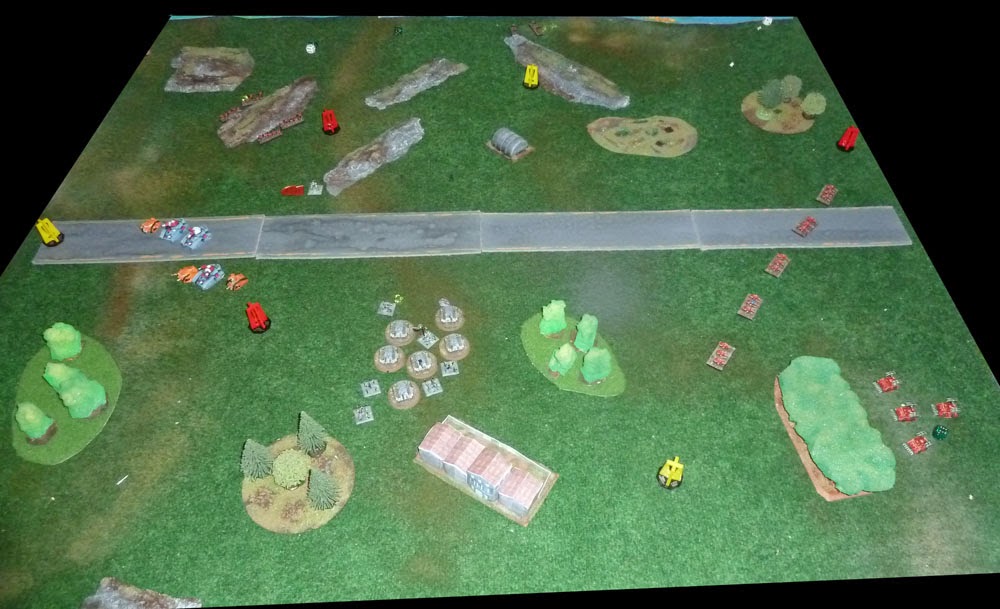 It was an interesting battle between two different forces. The fast moving, but rather fragile forces of the space marines. And the slow but resilient forces of the Imperial Guard. The plan as Blood Angles was to try to stay out of harms way of the Baneblades and try to pin the Guards on their side of the field while killing the smaller formations and if possible rush for the blitz. It worked, a bit due to inexperience of the guard player missing to advance the Regimental HQ to claim an objective. But it was hard pressed. Midway through the battle was the left flank of the Blood Angels almost abandoned. And the way for the imperial guard to the space marine blitz almost open. If there had been a Regimental HQ planted on the Space marine blitz where the Super Heavy tanks fended of any competition on the other side of the board. It would be hard for the Blood Angels to secure anything without huge losses.