+++ Estimated possibility of glory in battle to be found - HIGH +++

++++ Estimated conditions for new yarns to be recorded - GOOD++++


The Varyan guard has come to Unum searching glory in battle. A small scout party has landed in what once was a sacred groove to the emperor. Now overbuilt with ork huts. The Varyans consolidate in some old construction barracks that has been left around and play the 'Ride of the Varyans' loud to draw as many nearby orks to the spot as possible. 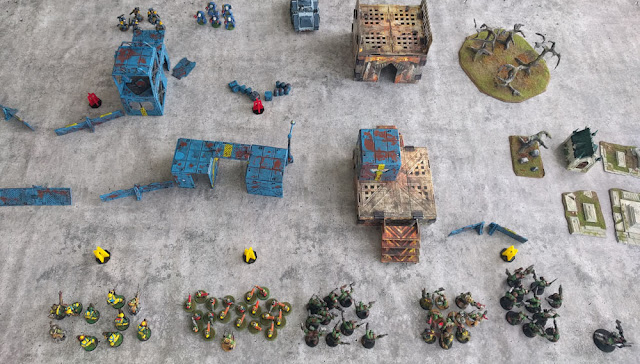 The boyz to the right advance a bit to take better cover behind a low wall the ᚦ-squad also advanced on the Varyan right to hide behind another wall.

This trigger the shootas that advance forward and fire all they have at the ᚦ-squad. The wall takes most of the bullets but one unlucky marine falls to the ground with a serious wound. 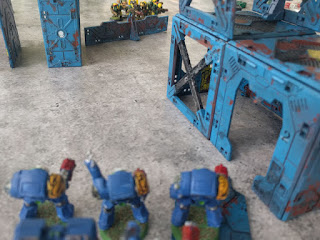 The Terminators advance towards the heap of rubble in the middle and fire at the shootas that exposed themself. Killing three of them.

In the middle the Rhino speed forward and slide into cover behind two small huts close to the ork line. However small part of it is exposed between the two huts making one of the ork mobs move forward and fire at it with their pistols but fail to do any damage.

The ᚠ-squad disembark and fire at the shootas. Killing two of them.

The remaining ork mob rush to the left flank where the marines has amassed. The boss join the mob in behind the wall to the right trying to convince them to move up. 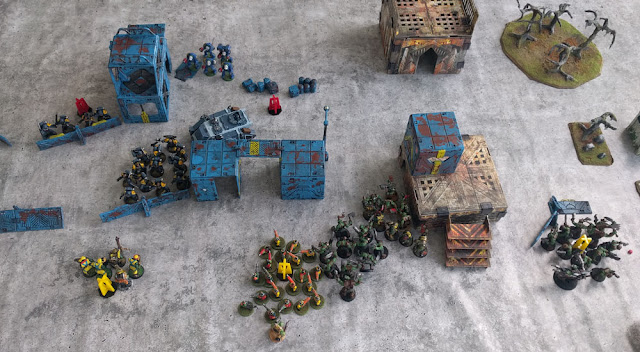 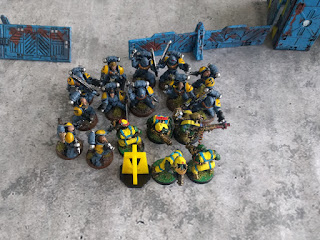 The ᚠ-squad charge around the wall and hit the shootas with full power. The disorganised orks are cut down before they have any possibility to retaliate. The nearby grots however are herded out of the way for the boyz behind them while they fire their puny shootas and by the grace of Mork kill three space marines.

The terminators take cover behind the crates and fire at the onrushing orks. Killing four of them.

With the grots out of their way the orks want to charge the space marines. But they do not reach them in time. While moving they fire their pistols scoring several hits but all of them bounce of the space marines thick armours.

The ᚦ-squad move up to give some covering fire to the ᚠ-squad but pistols are not enough to kill an ork. Only one boy goes down.

The boss give up the effort to get the boyz to move and instead charge up the nearby hut not reaching a good fire position.

The Rhino pivot in place and fire at the advancing boys but miss.

The boyz on the ork right flank stays behind the wall, extremely unorky (but they protect the objective, must be blood axes).

The other mob of boys in the centre shows better spirit and charge the Rhino. The giant axe-saw of the nob cleave the poor tank and the boyz make short work of the drivers. 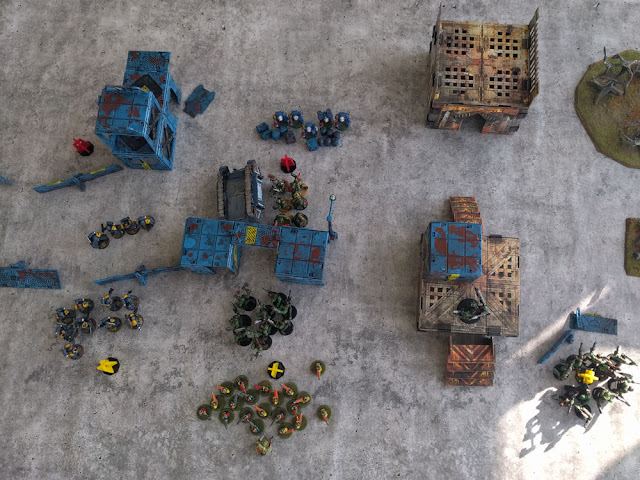 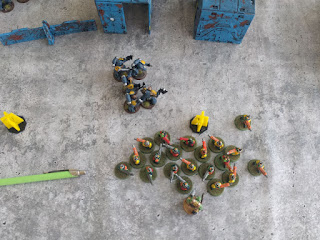 A cheerful roar rise from the ᚠ-squad as they see the boyz charging against them and they counter charge. Smashing into the green hulks with chainsaws buzzing and a battle hymn on their lips. Soon all the boyz lies dead on the ground. None of the orks manage to damage any of the marines. Nonetheless is three of the marines killed by cowardly fire from the grots in the space marines backs as they heroically was fighting the orks. 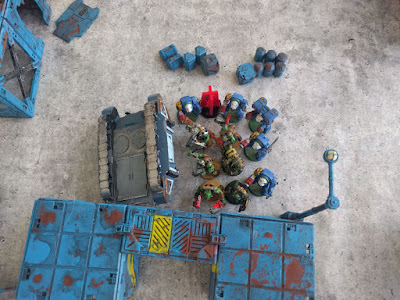 The Terminators decide to teach the bold orks a lesson for destroying the Rhino and charge them. They quickly crush the boyz with their energy crackling gloves. The nob on the other side single-handy engage two of the terminators. Before huscarl Yngulf have time to react the axe-saw bite hard into his right shoulder, cutting of the power supply to the power fist. Huscarl Jarl try to grab and crush the nobs shoulder but a quick swing of the end of the axe push his fist away. The nob then carry on with sweeping the leg under huscarl Jarl sending him to the ground with a rumble. Huscarl Yngulf staggered by the blow that rendered his powerfist useless rise his assault bolters to empty the clip at close range but the nob had predicted his move and with a side step duck out of the way, followed up with a spin hitting huscarl Yngulf with full force in the head of his suite, digging through with a shrieking noise killing huscarl Yngulf. Two bullet from huscarl Jarl hit the nob in the leg, forcing him on his knees. The nob turn and launch himself upon huscarl Jarl. Ripping the helmet from his suite killing him with goring tusks. The nob rise to his feet staring defiant at the remaining Terminators with blood running from his fangs.

For a few seconds everything is still then the Nob charge the leaders of the terminators huscarl Katjan. The force of the attack staggers Katjan backward. One strike he parries. Two strikes. But the third force his sword away and the forth hit him over the arm, cutting it of. Kartjan falls to the ground but his sacrifice has made it possible for huscarl Arnulf to encircle the nob. As Katjan falls he can see the nobs big grin turn into a expression of pain and surprise as huscarl Arnulfs power fist punch through its wide rib-cage.

Enrage by the coward acting of the grots the ᚦ-squad fire all they have at them killing two of the weedy grenskins.

The boyz on the right flank realise that they might miss some of the fun and run forward around the hut. 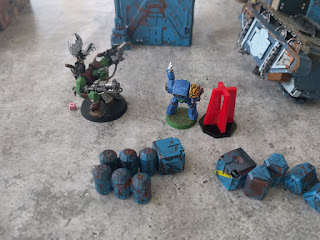 The warboss throw himself down from the hut and charge the two remaining terminators hoping to not miss the fun. With a furious impact he hit the terminator with the cyclone launcher locking him into his power claw lifting him into the air. In a desperate attempt he tries to reach the ork with his flamer only manage to make it more difficult for huscarl Arnulf to reach the warboss. With a terrible snap the terminator is cut in two. Huscarl Arnuf throws himself with full weight upon the warboss hitting him straight in the head with the powerfist throwing him at leas two meters back. But to his horror the ork just stands up again, and spits out one of his toofs. 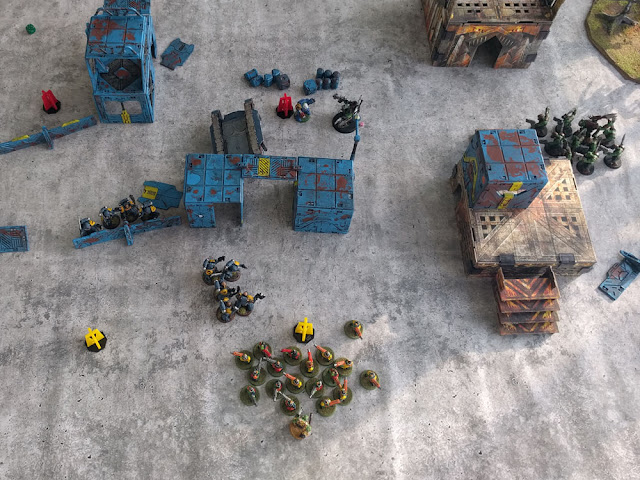 Huscarl Arnuf power up his powerfist again and charge the green hulk with pistons working overtime. The ork catch his powerfist in his own claw. A giant explosion from when the two incompatible powerfields meets throws both combatants in opposite direction leaving a crater and two smoking bodies.

The grots try to hide behind each other on the open ground and fire at the ᚠ-squad. Their puny guns unable to make even a dent in the space marines armours.

As a response the ᚠ-squad charges the grots. There is not much glory in killing so unworthy foes but still it must be done. The grots might not be good fighters but they are good dodgers and after much chasing and swearing only eight of them are dead. The rest is broken and running around without aim even the runtherds cracking whip can't get them back into order.

The ᚦ-squad move backwards, securing the retreat way (and thereby an objective)

In the smoking crater in the middle of the field a faint whining sound can be heard. It is the sound of the ork warboss cybernetic backup system kicking in. With a cough i rise up from the dust. The left half of the ork almost burnt away (1 wound left thanks to the cybork body). It was a good scrap. 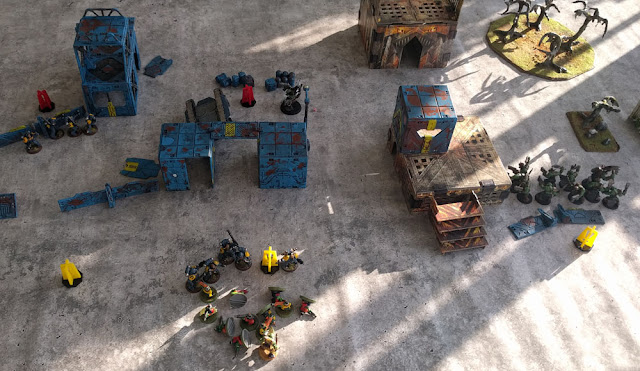 Counting objectives. Both sides hold two each while one is completely uncontested by either side. A draw.

The Varyan vanguard withdraw in shame. Not much glory found alot of glory lost in the five damaged terminators suites. Their previous owners now drinking with their brethren in the gardens of Mickle. The report nevertheless is waking great hope among the other Varyans. The information they got was correct. There is stout enemies on Unum and alot of glory to be found in the future. The loss of their brothers glory make the glory from further victories all the more glorious.