Battle of the crates

The two forces, the Night Lords and the Tau has carefully avoided each other since the first bloody battle of Carcassoa. Meanwhile each force have  scavenged the city for all possible resources and they have both collected quite a few needed supplies. Lord Arcous has however come up with a cunning plan. Aware of the Tau depot spot he will attempt an assault trying to destroy the Tau supplies thereby hopefully putting them at a disadvantage in future battles. Unaware of this has the Tau leader Ul'Vain planned to assault the Night lords supplies hoping to hamper their hold of the other half of the city.

The battle was fought with 1000pts a side. The mission rolled was sabotage. Each side has one supply depot that can be destroyed in close combat by causing six wounds to it. The Tau army consisted of two units of 10 firewarriors, a Hammerhead with  a railgun and distruption pod and a squad of Crisis suites armed with two fusion blasters, one burst cannon, two plasmaguns, a missile pod and a shield drone.
The chaos army consisted of two Predators, one with lascannons and one with autocannon. Three five men squads of Chaos marines, one squad of basic Terminators and lord Arcous himself.
The Night lords decided to keep their Terminators in reserve and the Tau kept their Crisis Suites in reserve.

The Tau has hidden their supply behind some houses while the Night Lords trust in a forest as protection for the valuable supplies. 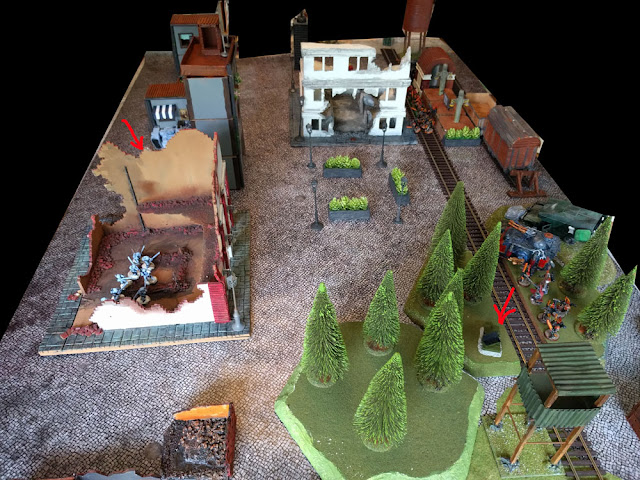 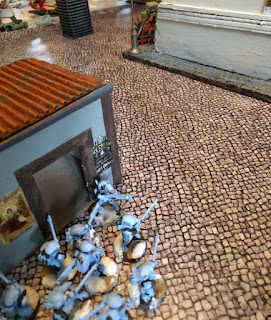 Lord Arcous, lacking any good target order a squad of his warriors to run forward seeking targets. Suddenly the sleek hull of a Hammerhead appear behind a house. Before anyone had time to react the railgun smatter away and almost destroy the Predator hiding in the forest. The predator respond and fire back with its laser cannons causing some damage on the Hammerhead. In the ruins opposite to lord Arcous a squad of fire warriors advance. Firing at some marines hiding behind a house along the rail track failing to do any damage. Arcous order his other Predator to start a circling manoeuvre on the right flank. Just to run in to another squad of firewarriors that advance and fire their rifles at it actually causing a damage. 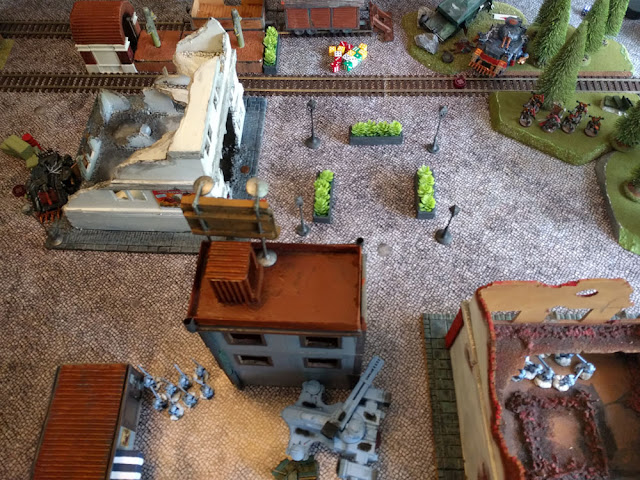 Arcous order his second squad to run forward to protect the Predator while he take his own squad forward in the forest to engage the Tau in the ruins.

Turn 2
Behind him lord Arcous suddenly hear a the sound of jet engines as the Crisis Suites deeps strike just behind the now unguarded supply crates. Arcous swear and wonder where his own Terminators are? 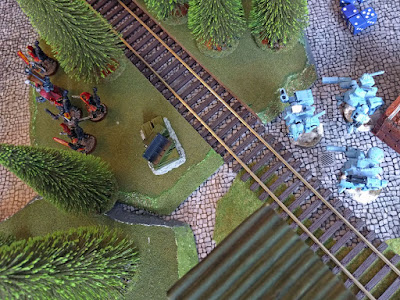 He has however not time to react to the new threat before the Hammerhead fire its Rail gun again, destroying the Predator behind Lord Arcous. At the same time multipple rockets from the Hammerheads missile pods land in the midst of Lord Arcous own squad. Killing one of the marines. He curse  and order his marine to turn back and assault the crisis suites behind him.

With a terrifying high pitched sound the marines charge the Crisis suits through the forest. Ducking the desperate shoots from the Tau. Their wining chainswords strike again and again but the thick armour blocking almost every strike. The bulky suites does not however manage to land a single strike on his battle experienced warriors. In the end the brute force of the assault is enough and the spirit of the plasticsteel clad Taus are broken. 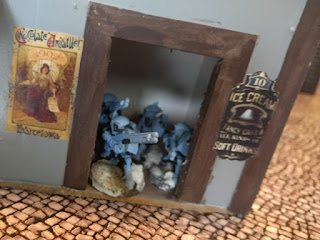 The marines succeeded only to do a single damage on the armoured Crisis Suites. The Tau did not do a single wound on any marine so the marines won the close combats and the Tau failed their morale test and got pinned the rest of this round.

In the other side of the battlefied the squad of tau firewarriors realise that they can not handle the predator and take cover in the nearby house. 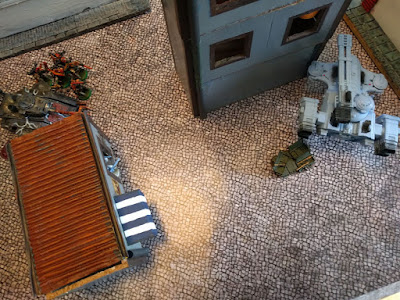 The predator instead aim its cannon at the Hammerhead, but fail to do any damge. The Tau in the ruins run across the open field into the forest not far from the Night lords supply depot. While the remaining chaos warbands run toward the Tau supply depot.

Turn 3
A strange swirling light appear just behind the lord Arcous, he knew what that meant. His Terminators was on the way. But by some strange coincident of the warp, the light suddenly moved quite a few meters to the Night Lords right and the Terminators appear from the warp outside the wood in a not so good position. (The deep strike scattered and the Tau player got the chance to move the terminators up to 12" in any direction which off course was as far away from the crisis suites as possible.) 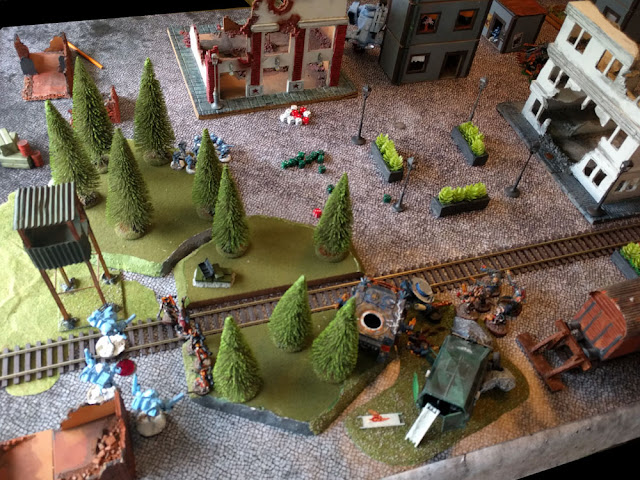 Lord Arcous is not however given time to reflect over the changed tactical situation that the Terminators appearance implied as the Crisis suites had rallied. At point blank distance they fire all their guns. Lord Arcous had time to see one of his men getting deintegrated by a direct hit of a Fusion plaster before multiple plasma shots hit the Lord causing him to fall bleeding to the ground. 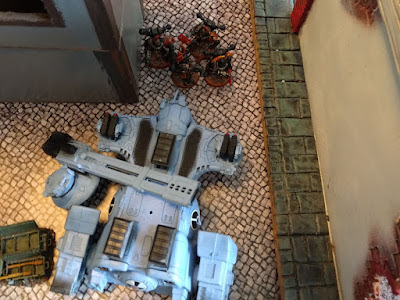 The Terminators moved over the rails and fire their assault guns at the running firewarriors killing two of them. The other squad of firewarriors realise that they had to do something about the squad of warriors running towards them and charge out of their safe house fire their guns, but only manage to kill one of the approaching warriors. Behind them another squad of chaos marines charge around a corner chainswords blazing in the sun. Placing a few well placed grenades under the Hammerhead, blowing the machine up sky high. 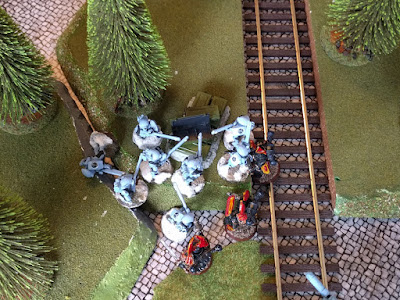 The firewarriors in the forest charge through the under foliage towards the Night lord supply depot. Smashing a few crates with their rifle buts. The now leaderless warriors of Arcous body guard had a hard choice. Kill the flying crisis suites that kill their leaders or protect the supplies. In the end they decided that the supplies was the most imported and charged the firewarriors. Without their leader the luck was no longer with them first d facing a hail of close range fire from the firewarriors. (Most Tau has a Support rule that give them an sort of overwatch shot against all assaulting enemies)  Killing one of them. A second was tripped by a Tau rifle and stab to death by multiple knife stabs. The last warrior manage to separate a Tau head from its body before retreating. The Tau holding their ground. 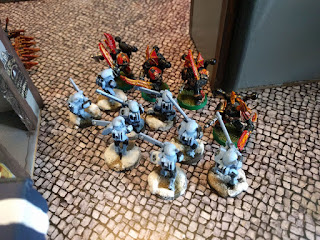 Unknowing their breatherns failed assault the third group of marines assaulted the other group of firewarriors. Their battle cries paralysing the Tau by fear, cutting flesh and bone from blue-skinned bodies. Killing enemies to the left and right. The tau morale break and they flee only to be cut down from behind by the Night lords. The warband consolidate to the now unguarded Tau supplies.

Turn 4
With lord Arcous now unable to lead his troop they acted on primal battle lust. Killing all that they could get into range of. Witch at this point however was not much.

The Terminators advance toward the forest fire at the crisis suites. Failing to do any damage. The firewarriors continue their task to try to destroy the Night lord supplies almost making it (only one wound left) 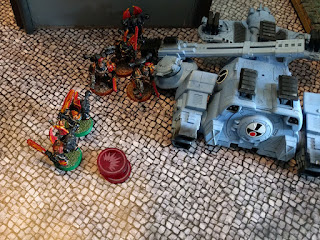 The lone remaining warrior of Arcous body guard try to avange his leader. Assaulting the Crisis Suites only to be gunned downed in the process. The Crisis suites make a jump onto the crates. Smashing the last of them.

On the other side however the two remaining warbands make short notice of the Tau supplies.


Both sides has accomplished their missions and the game had to be decided by points.
The Night Lords had succeeded in killing a squad of firewarriors for 190pts and a Hammerhead for 255pts making it 445pts
The Tau had killed a Predator for 270pts, A squad for 100pts and Lord Arcous for 45pts for a total of 415pts. A Night Lord victory.

With another victory like this and the Night lord will be doomed. Not only did they loose their own supplies to the treacherous Tau. They also lost a valuable Predator and the loss of Lord Arcous will probably mean an internal struggle for his spot. The destruction of the hated Tau Hammerhead will however probably stop the Tau for at least the same amount of time.