Hijacked by a mysterious force a Tau battlefleet has been forced to the Gota sector. With several ship in badly need of repair and and with no knowledge about the surrounding star systems they had no choice but to set course to the closest available system that happens to be the Unum system. Even though their long range scanners showed it is already occupied by humans as well as orks.

A small scout cadre is deployed in what seems to be a calm area of the planet with the orders to scout for possible supplies to repair the ships and a suitable place for a base of operations.

While searching and bombed out abandoned city one group of the cadre face and unexpected enemy. A small Night lord warband also in search for supplies.

The battle was fought using the OnePage 40k rules. A faster less complicated rule set for 28mm 40k. It can be found here https://onepagerules.wordpress.com/.

The mission was relic hunt with five relics in form of ammo crates containing important supplied for the two stranded forces. The force controlling the most relics after four turns are the winners. 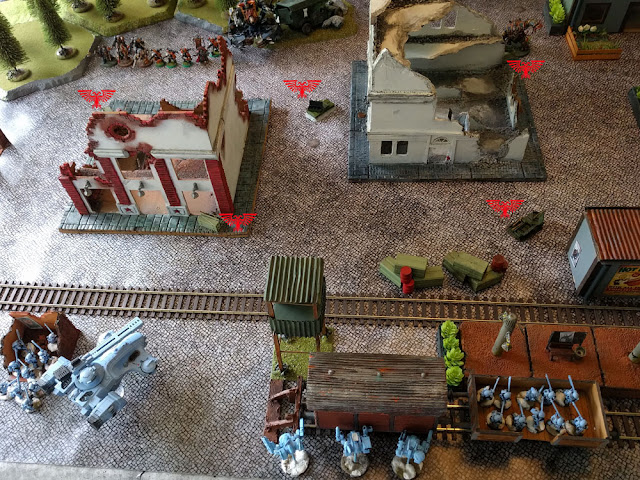 Scared terrified by the hulking beast that the Defiler impose the Ul'Vain designate it to be the prime target. The Hammerhead move up close to one of the crates, while still getting some cover from the house and fire its impressive Rail-gun at the machine-beast. Severely wounding it (2 wounds). The Defiler respond by offloading it's battlecannon and autocannon at the Hammerhead (2 wounds back). 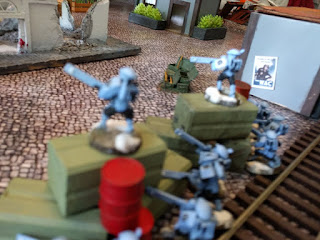 The firewarrios run and took cover behind some crates and secure the first supply crate not noticing a warband running up behind a nearby house on the Tau left. 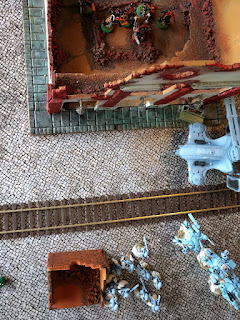 Ul'Vain and his crisis suites fly forward in full speed towards one of the other crates.

In the ruins another warband led by Lord Arcous advance under some scatter fire from the fire warriors that miss their shots against the moving targets. With the Tau occupied the Chaos terminators advance and kill one fire warrior with an autocannon.

In the other ruin the hellbrute advance unopposed while the final warband hide behind the same ruin. close to two of the supply crates. A place the will remain at during almost the entire battle. 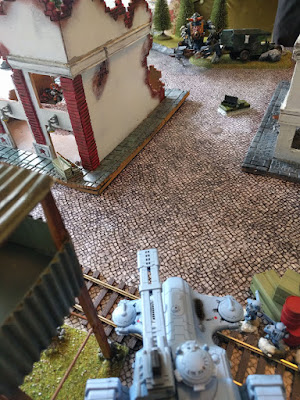 The Hammerhead face a tough choice and decide to retreat to get out of the assault distance of the advancing warband. While retreating it fire its Railgun against the Defiler blowing the monstrous beast to smithereens. A collective cheer rise from the Tau. (As expected the Railgun was a joy to roll for) 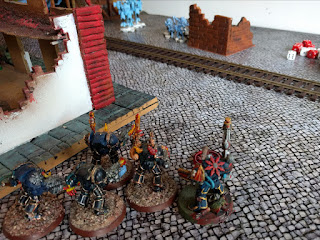 In the ruins on the chaos right the warband led by the lord advance and secure a crate. The take however some fire by the firewarrior squad and is decimated to only two men.

Even further on the right the terminators advance and kill one of the crisis suites. Unfortunately the
one with fusion blasters, something that would be much missed in the future.

Demoralised the The crisis suites only manage to kill one of the remaining two of the warband in the ruins. 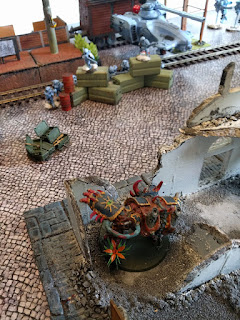 In the other ruins on the chaos left the Hellbrute advance and fire it's multi melta, now in range, against the Hammerhead, causing another two wounds. The tank now having a more than healthy number of holes in its armour.

The firewarriors fire back and succeed to wound the beast with their small arms. 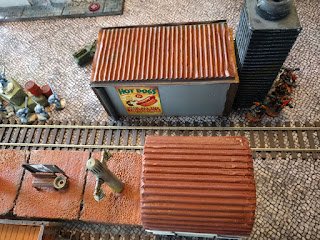 Even further to the left a warband run to get into the firewarriors rear. Causing the Tau commander some headache.

Turn 3 Tau starts
The Hammerhead try to eliminate the threat the Hellbrute pose and fire the rail gun at it killing it in a hail of metal shards and blood. 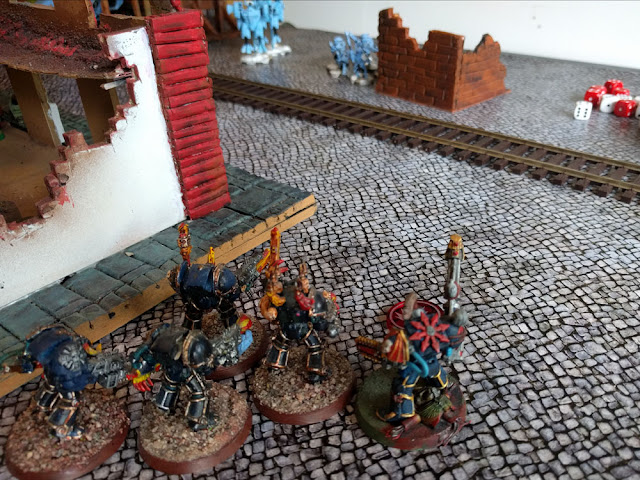 On the Night lord right the Terminators advance and try to down some of the crisis suites but their
shield prevent almost all shots to get through. Instead the fire warriors try to kill the survivor in the ruins in front of them but fail. At least they succeed in putting a marker light on the terminators. Making them prime target of the crisis suites that kill two of them. While the few survivors in the ruins kill one of the firewarriors.

The warband on the chaos left continue the flanking manoeuvre but take some causalities by the Tau that shift cover behind the crates. The last warband continue to stay out of sight and have two of the supply crates in range for the next turn. The warband charge the Tau firewarriors. And even though only two marines is not cut down in the Tau preceding fire they kill enough of Tau to pin them. Thereby claiming the supply crate. The Hammerhead fire at the Terminators killing the one with autocannon outright. 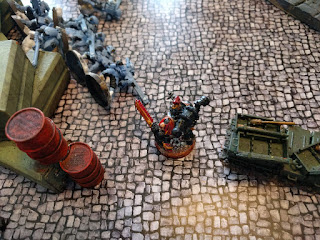 The terminators move forward and try to do some damage on the crisis suites but without the heavy weapons it is futile. The firewarriors and crisis suites finish of the warband in the ruin making the crate unclaimed.


The chaos has however no problem to claim another crate with their warband that had been waiting, in a very unchaos way, out of sight behind a ruin the entire battle. And one crate with Lord Arcous.

Facing an increasing number of casualties both forces retreat from the battle. The Night lord carries with them three crates containing invaluable holorecordings from archaeological excavations that might give them a clue to where the artefacts from the heresy might be situated. Just hope it is worth the cost in manpower. The Tau has to retreat with lesser losses but nothing to bring back but the news that the planet house more enemies then they first estimated.

It was the first time with the Tau under the OnePage rules. It worked fine but the Tau was to passive to have a chance. And in a game where you alternate initiative and it is almost always a good thing to have more units than you opponent made it even worse. The fire warriors wasn't to impressive in shooting (for Tau) but the crisis suites and the Hammerhead more than made up for that. And the firewarriors did surprisingly well in the close combat that they took part in.