We had a small game of epic last night. Since it was a while, we played 2000pts without flyers. Orks vs Imperial guard. Unfortunately I forgot to bring a camera so the mobile has to do, thereby the terrible images.

The winter has reached the northern part of the battle torn planet of Agnebergus IV. For five long years the battle between the orks and the empire has devastated the planet. At the Equistrus front the bad moon warboss Wasnagga Bubbleboots succeeded in sneaking through the imperial lines with a small force and has since then plundered and ravaged a less important part behind the lines. But now the guard has decided that it is enough and decided to try to stop him at the small settlement Equistrus Minor. The task has fallen on the second battalion of the Steel Eagles.

The guard commander cunningly hide the basilisk in the forest of their left flank and their scouting sentinels and rough riders behind a cliff also to the left. Then he sent in a scout party of expendable infantry to take a foot hold in the suburb. Unfortunately to realise that the ork already has taken position on the opposite site. The scouting sentinels also report a big formations of guns just outside the suburb. Meanwhile the main force of Wasnagga comes marching over the old trenches. 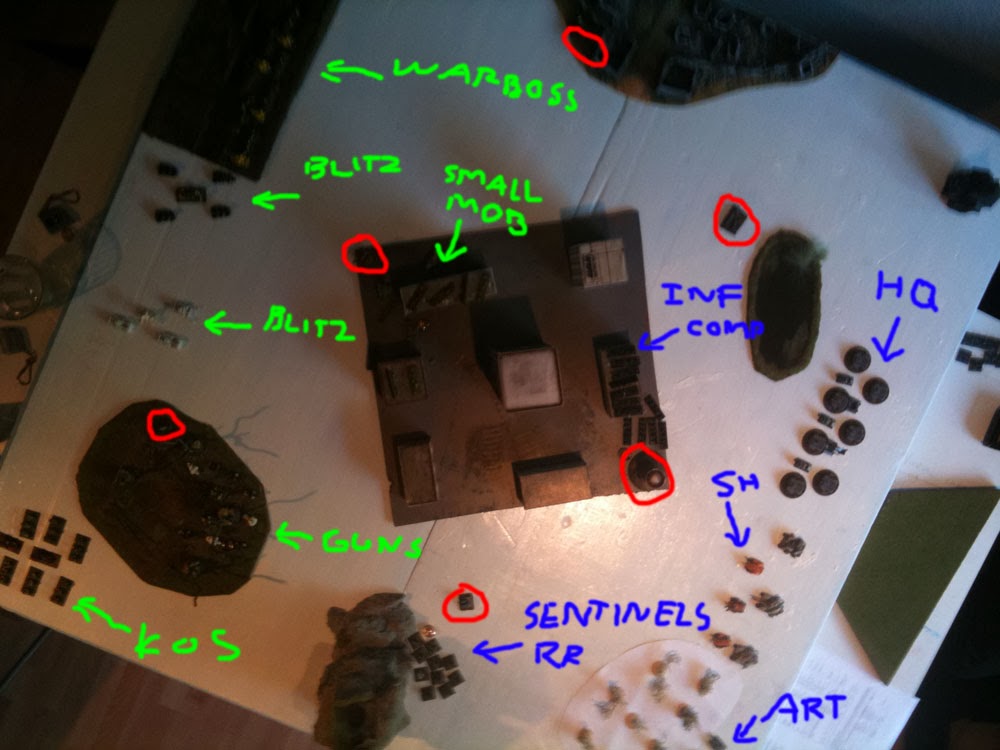 One of the ork blitz brigades rolls into the suburb and try to flush out the dug in infantry in the houses. Doing just minor damage.

The commander order the basilisk to fire, but they realise that they forgot to bring any shells (double 1). The captain of the artillery is executed.

The other blitz brigade doubles forward fire at the HQ. Hoping to kill a chimera with passengers. But fails miserably.

The sentinels advance and finish the super heavies job. Routing the gunmob. The gunmob withdraw to the end of the forest. 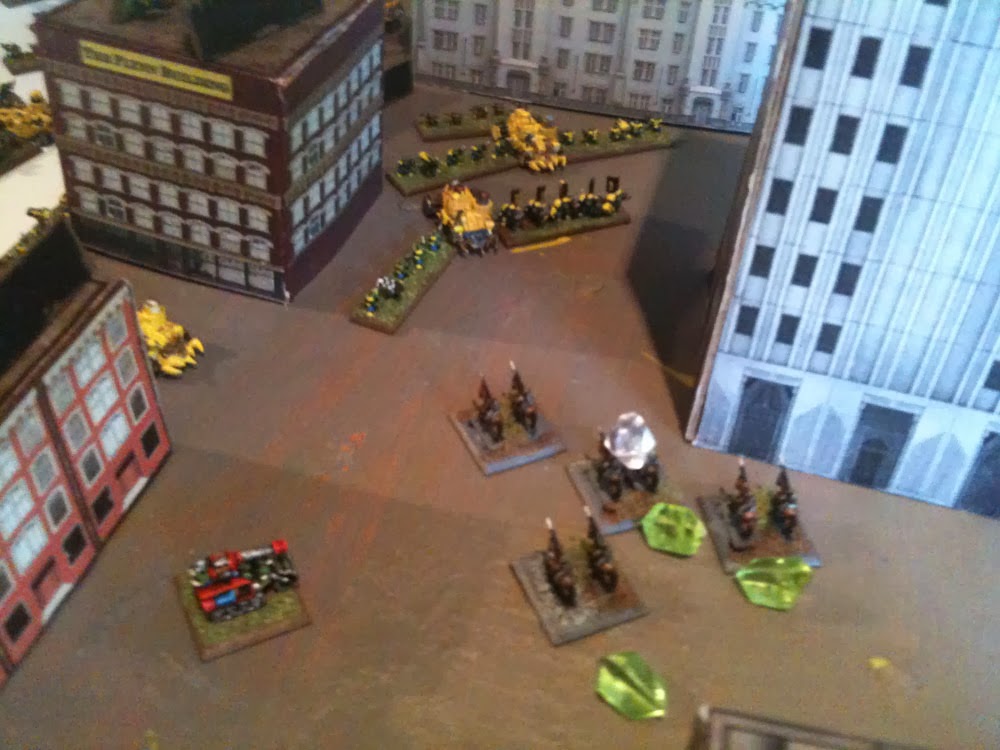 The small ork mob in the suburb try to advance towards the guard but fails. Getting of some shots without any damage.

The Regimental HQ advance and rout the blitz brigade.

The fast attack engage the annoying sentinels and kills them to a man. Brace themself for the impact of the Rough riders.

That does not come. The Rough riders instead ride into the suburb and wipe out the entire blitz brigade and only loose one stand.

This enrage Wasnagga that doubles into the city and attack the exposed Rough Riders. Only succeeding doing one damage even a horde of dices was rolled.

The dug in infantry in the city try to retaliate with a sustained but fails and just fire a few pot shots at Wasnaggas unit.

The warboss double to try to get in as many guns as possible in the suburb hoping to rout out the infantry in the houses. Rolling 29 dices. Killing 1 imperial guard.

The super heavy then advance and fire back. Killing 11 units in Wasnaggas unit including most of the battlewagons. 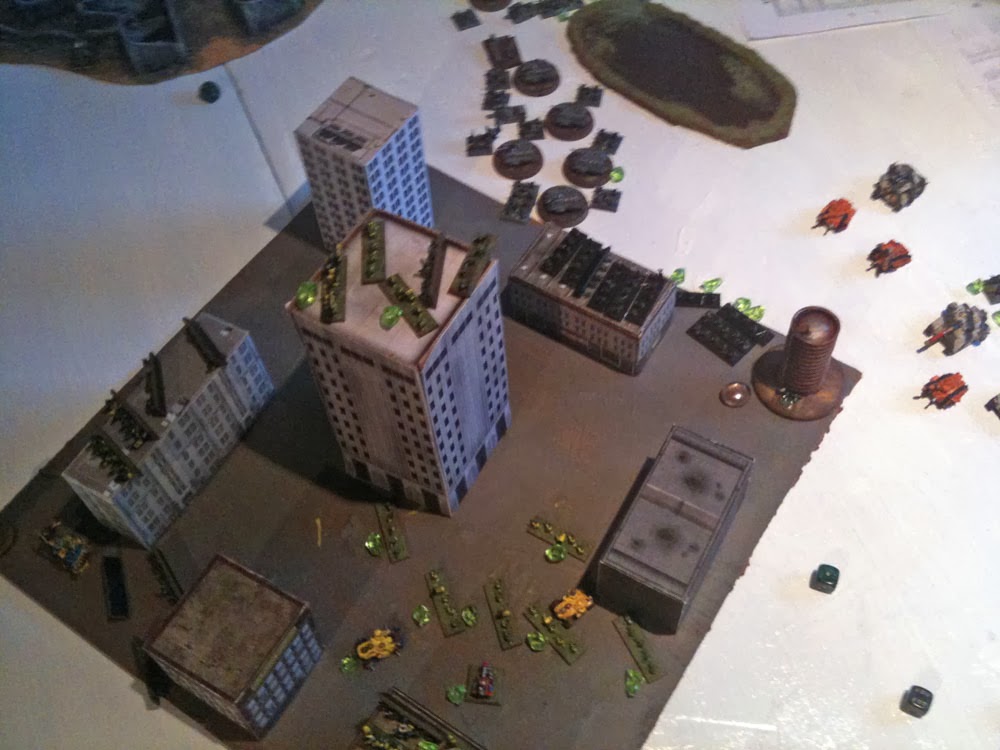 The guns in the forest doing a double to get in position and fire at the super heavies. Doing no damage.

The infantry in the suburb sustine fire at the warboss. Killing only 2.

The remaining blitz brigade fire their only gun. Killing one guard in the HQ.

The HQ then advance and breaks Wasnaggas mob with two kills. Things start to look bad for Wasnagga. 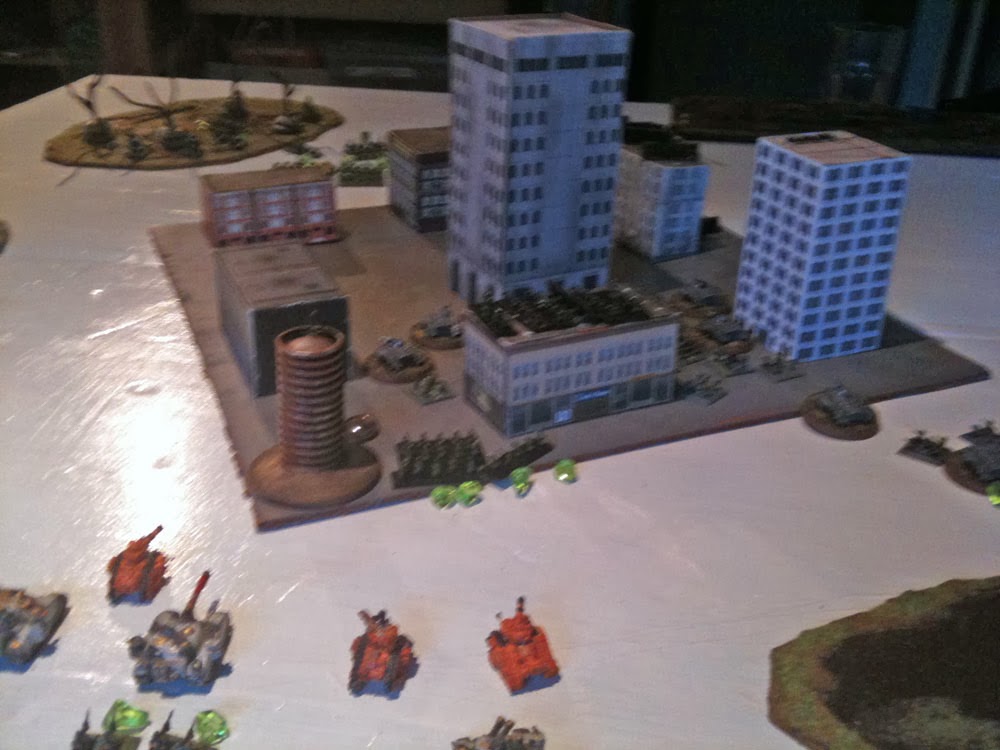 The small mob in the suburb try to engage the Regimental HQ hoping to engage only a portion of the large formation. Miscalculate the distances a bit and getting wiped while only causing three casualties. 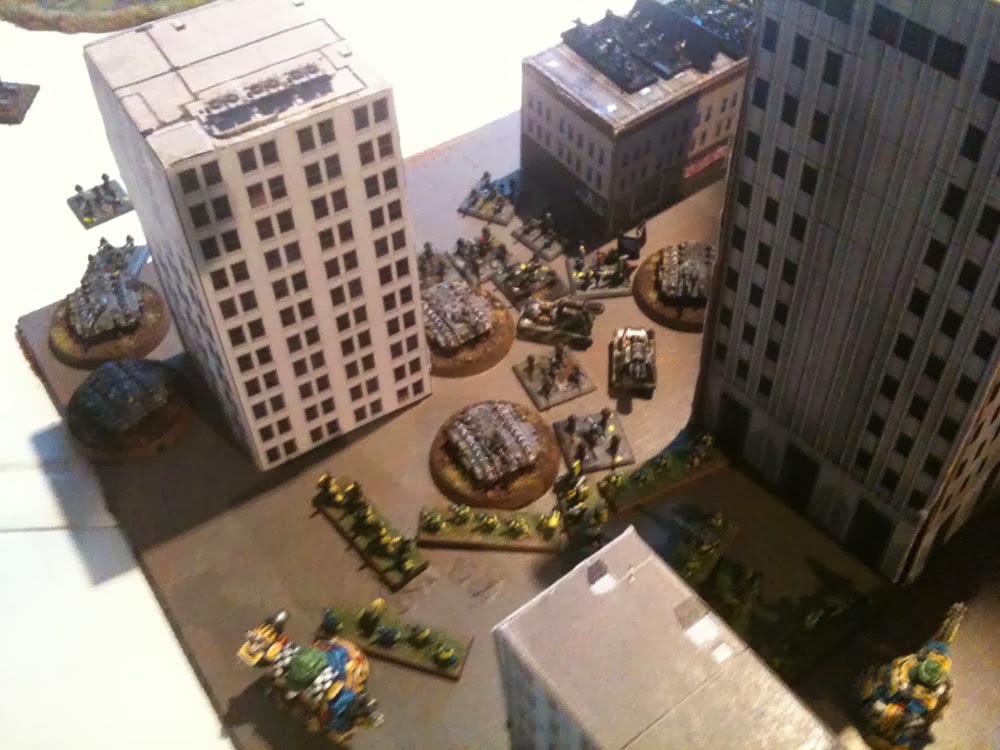 The basilisk sustain fire at the ork guns. Killing four, including all oddboys. Breaking them again.

The blitz brigade double towards the stranded space marine objective in the ruins to their left and take position, fire at the guard HQ kill a chimera with the lifta droppa. 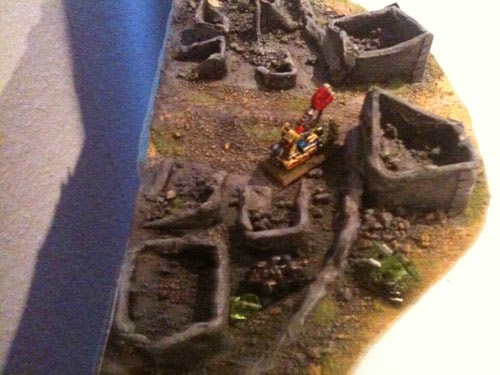 The HQ respond by engage the blitz brigade and wipe them out without any losses of their own.

The kult of speed that is back in business take the short route towards the enemy and rush through the forest. Loosing one bike but reach the basilisk. Win the combat but kills only one of the dreaded artillery.

Wasnagga starting to feel that the cause is lost decide to going out as an ork and advance towards the super heavy. Killing one russ.

The Infantry in the suburb engage the exposed orks. Failing miserably killing not a single ork. Loosing three themself and break. 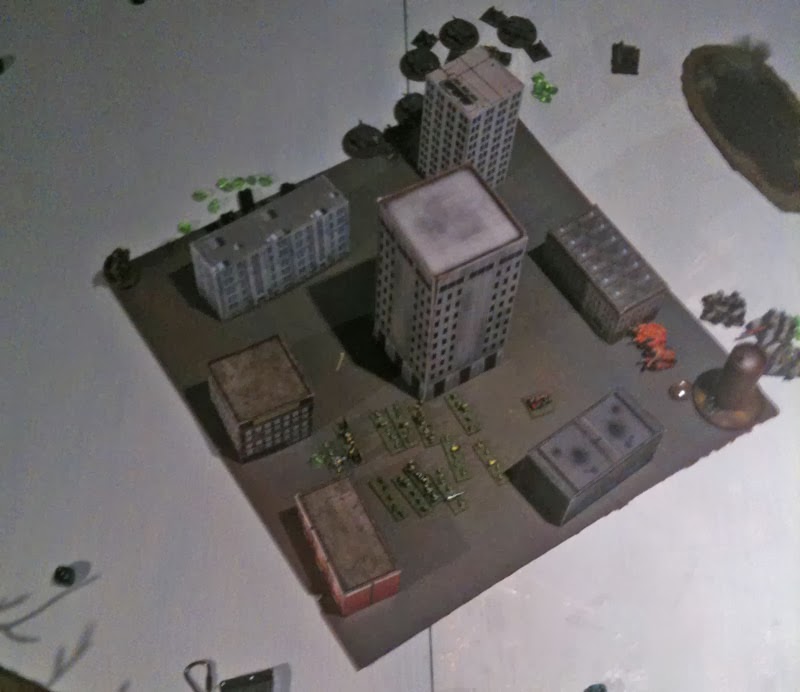 The kult of speed. The only remaining ork formation engage and kill the rough riders.

The HQ fail their advance and spread out between the objectives a bit.


Well it was a tough one for the orks. It felt like a constant uphill. The super heavy company was a hard nut to crack. Almost didn’t make a dent into it. Another constant problem was the Rough Riders. Amazing unit for the points. Mobile and can threat most smaller units with its infiltrate and first strike. I was probably to reckless with my blitz brigades but you don’t play orks if you don’t like to charge in do you?
Posted by Peta at 7:39 AM