During the long winter of Agnebergus IV, the warboss Wasnagga Bubbleboots had whipped his mekboyz to produce the biggest, meanest, greenest warmachine the war ever had seen. The result the mega-gargant Bigbellow-Gruntsmasha. Eager to try the huge machine in battle he summon his Waaagh and march straight towards the empire lines. Unfortunately Bigbellow breaks down, rendering it immobile. With the troops already worked up with battlefrenzy, Wasnagga sees no other option than to leave his precious new toy behind and lead them to battle in a smaller gargant. He leaves Bigbellow under the guard of the warboss Hafnottateef and a small squadron of his more restrained boyz.
The immobile gargant is however spotted by imperial scouts and the commander Marius of the Steel Eagles see it as a possibility to gain greater glory than to guard a far away flank in the coming battle that probably not going to see any action. He gather his ragtag troops and march straight toward Bigbellow-Gruntsmasha in the hope of destroying it and gain glory and fame. 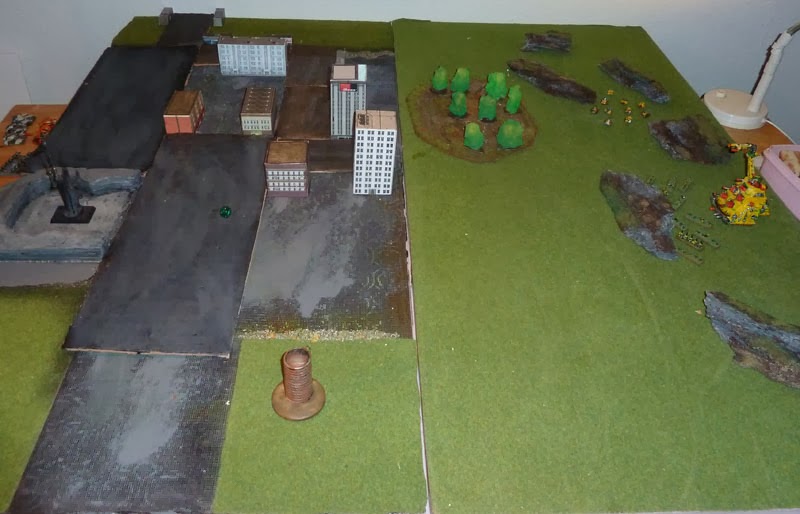 The ork big gunz lacking something to shoot at try to go on overwatch but the concept was totally incomprehensible for the runthearder bossing the mob.

Instead letting the super-heavy company march into cover behind some buildings.

Hafnottateef realize that he is not getting anything better to shoot on at the moment then the guard HQ slap the closest nob signaling to bring all guns to bear. The huge machine jerks ten meters backwards and a huge explosion devour Marius Chimeras. Killing more than half the squad in one go. A unison WAAAAGH rise from the gargant. Marius direct his fleeing troops to his left flank.

Meanwhile the rest of Marius troops march into safety behind the near abandoned houses not far from the gargant. 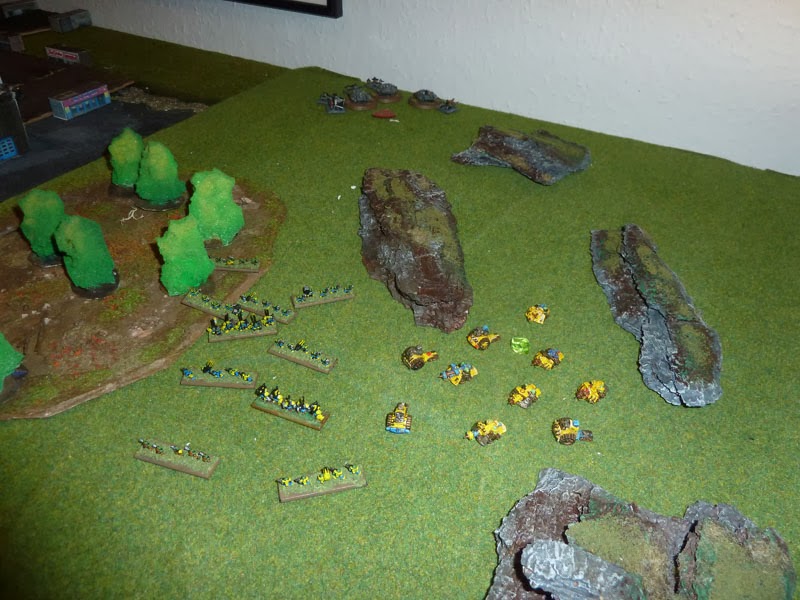 Hafnottateef yells at the boyz to double after the broken HQ but they fail to reach them with their guns.

Marius manage to rally his battered HQ at the left flank and threaten the advancing boyz. 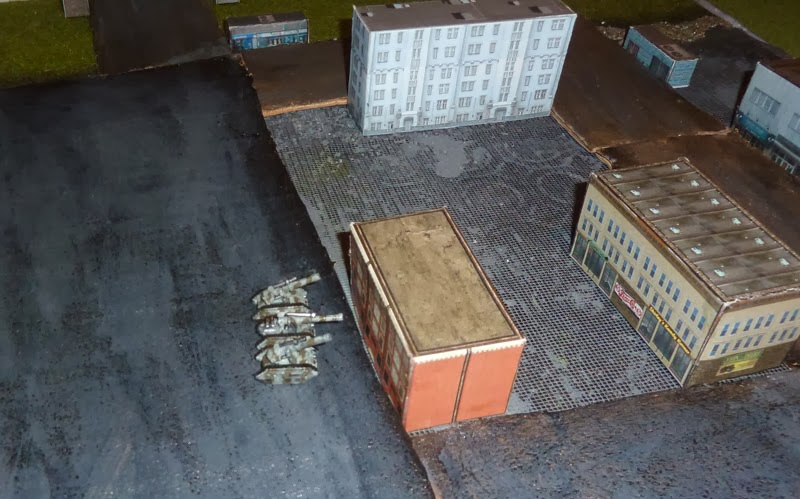 The Basilisk has now taken position behind some houses and the forward spotters had spotted the ork big gunz. The great guns fire and killing four big gunz breaking the formation that flees behind the closest mountain.

Meanwhile the boyz keep advancing towards the HQ, letting go of a hail of lead. Killing two units, including the commander Marius just beside his command vehicle.

The remaining troops in the HQ tries to react but fail (a one rolled and no more rerolls, something that would plague the guard in the future.) The troops instead breaks and runs towards the hills. 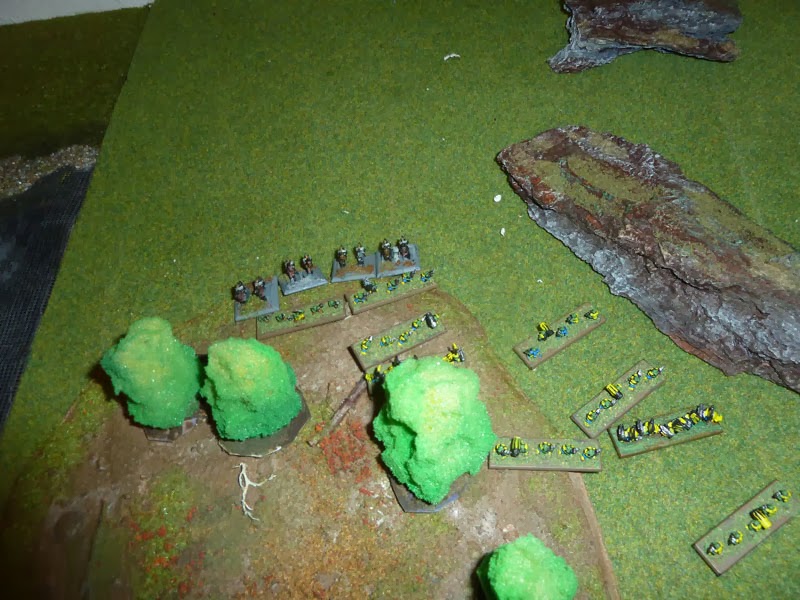 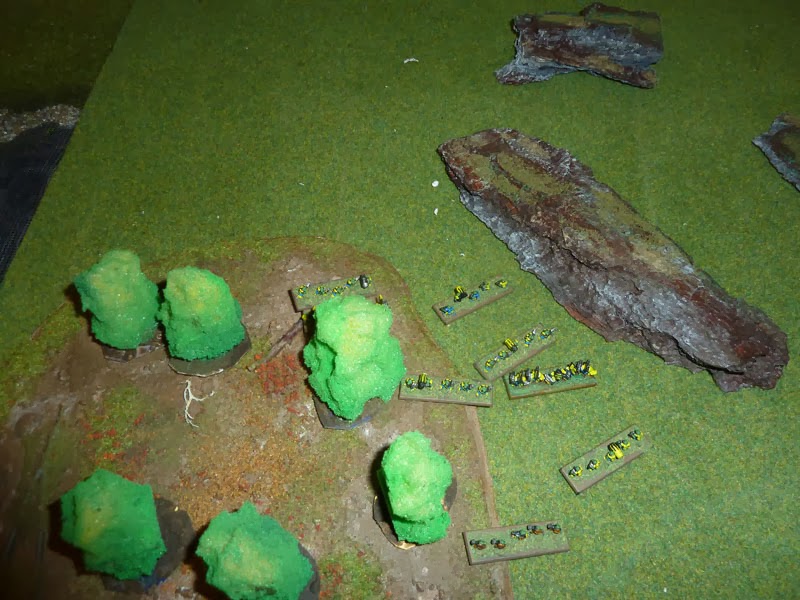 Hafnottateef yell at the gunners to fire at the fleeing HQ hoping to destroy them, but forget that the gargant cant move and every gun is facing forward where there is no targets. Hafnottateef instead kill the nob that informed him that there where no target for the gargant gunz.

While the gargant is paralyzed with Hafnottateef lecturing his nobz that there is no lack of targets just lack of will. The rough riders leave the safety of the city and try to engage the boyz in the wood.


But the luck is not with them, several of the horses stumble and falls (two ones) and the rest fail to do more damage than killing some grotz and a few orks. Getting gunned down in return. 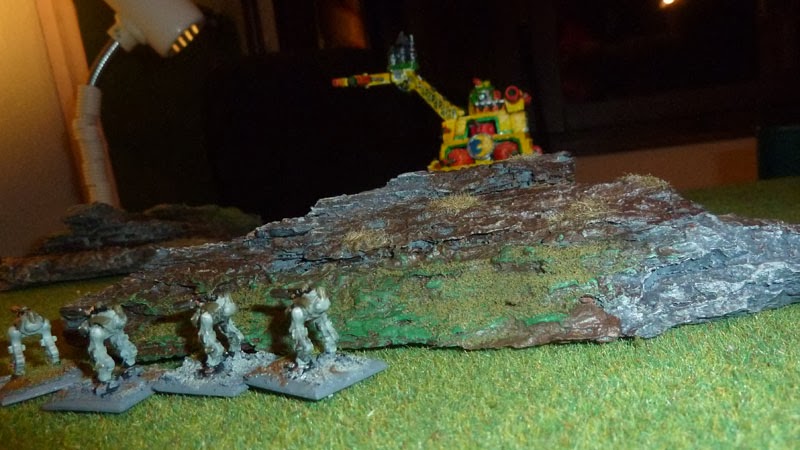 The sentinels march forward and hide them self just out of sight for the great gargant behind a hill not far from the machine. 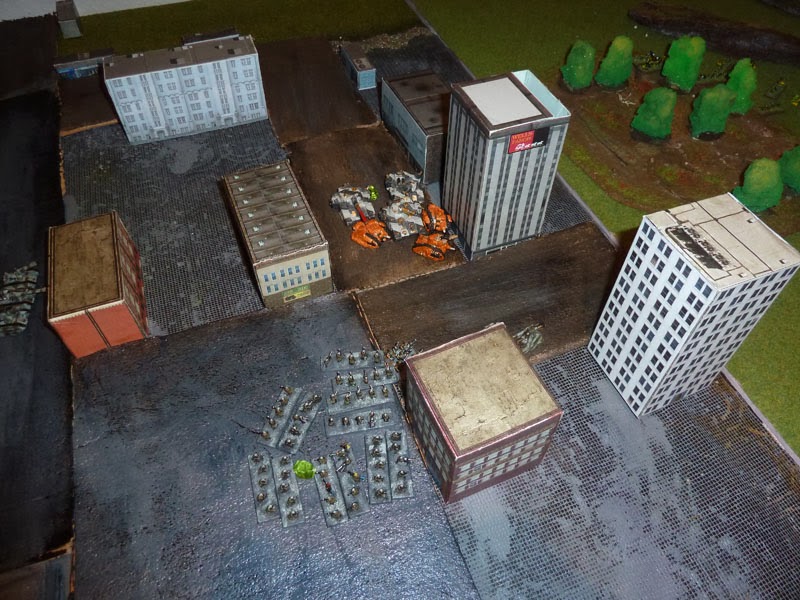 Both the infantry regiment and the super heavies however was still distracted by the loss of Marius (two more ones) and slowly advance in cover of the buildings.

The battle is starting to take their toll on the morale of the men, no-one rallies. 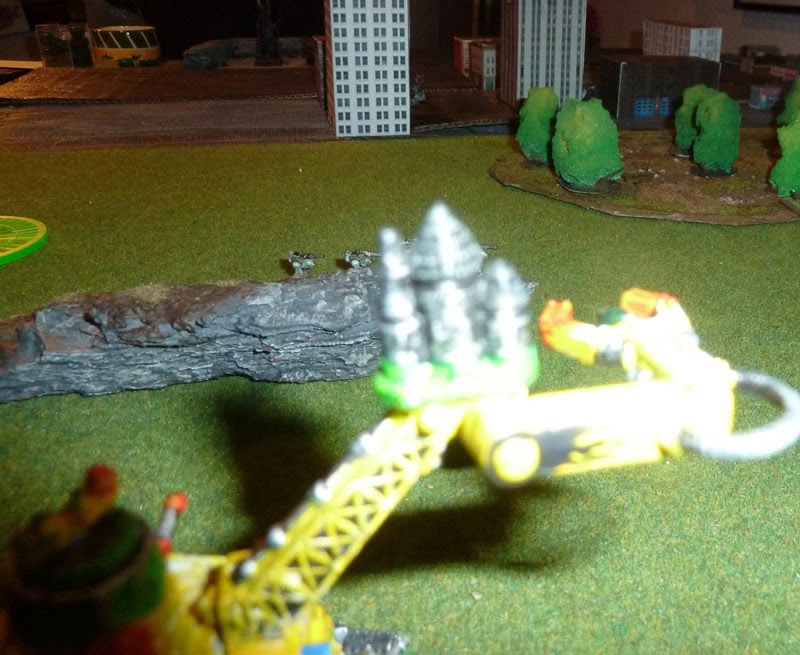 The Basilisks in the city make them self ready to fire their gunz but loose contact with the spotters. (another one).

Meanwhile the gargant lack anything to shoot at and try to go on overwatch. But for orks it is still a concepts hard to grasp and fails.

With the gargant having some problem firing the super-heavies see their chance to advance and put them self in firing position in the outskirts of the city. Their guns however fire wide and only a few shoots bunches of the gargant armor (the shadowsword of course rolls a one). 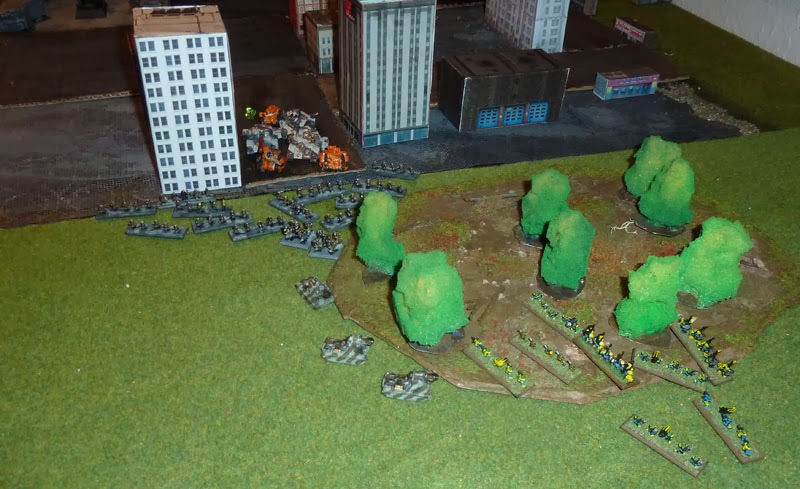 The infantry squad also advance and their Hellhounds try to flush out the boyz from the woods but only kills one unit.
None of the broken units succeed in getting their stuff together but both the bozy and the super heavies loose their blast markers. 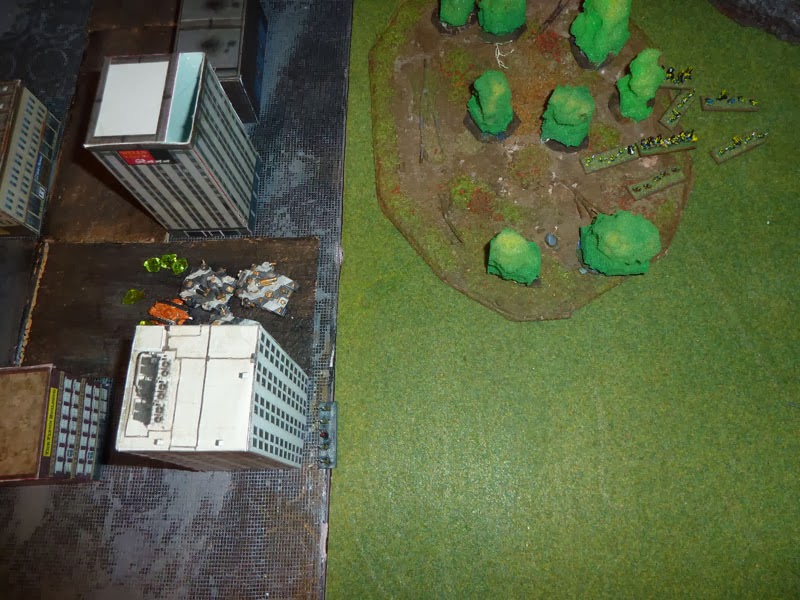 The super-heavies are however just damaged and advance even closer to the gargant. Firing all their guns on the move. The Shadowsword get a direct hit (3 damage) making a huge part of the gargant to fall of, killing some repair grots on the ground.

The boyz are sneeky gitz and fire in the back of the fleeing infantry killing the rest of them.

The Basilisks has regained contact with the spotters and fire with accuracy on the gargant. Still only causing minor damages (one damage)

The sentinels succeed in getting the moral up and the super heavies regroup. The gargant however fail to getting the crew in order after all the hits.

The Super heavies however, remaining stationary, fire with far better accuracy, but even the great explosions only does what seems like small dents in the great war engine. (Two damages) 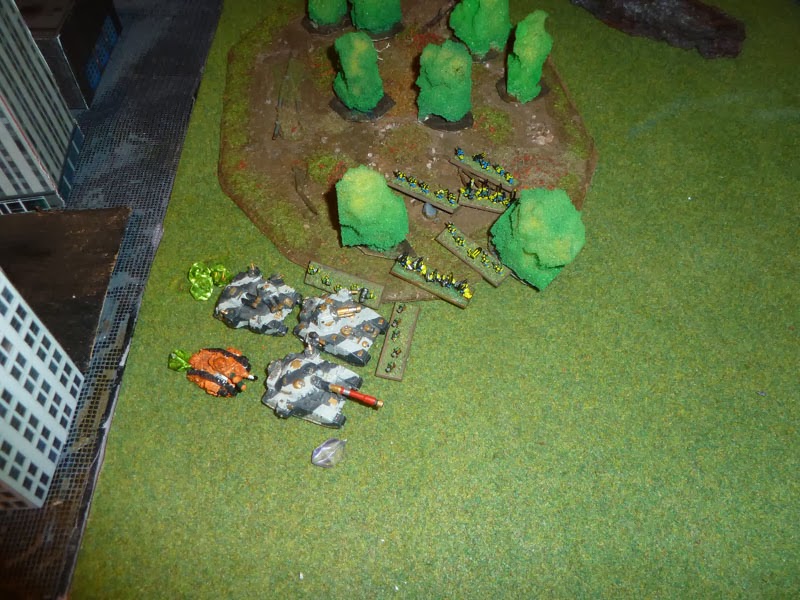 The boyz see the danger that the super-heavis represents decide to engage them in hope of at least taking down one of them. The bolters of the big tanks however cuts down the charging orks like wheat and the few remaining flees towards the safety of a nearby house. 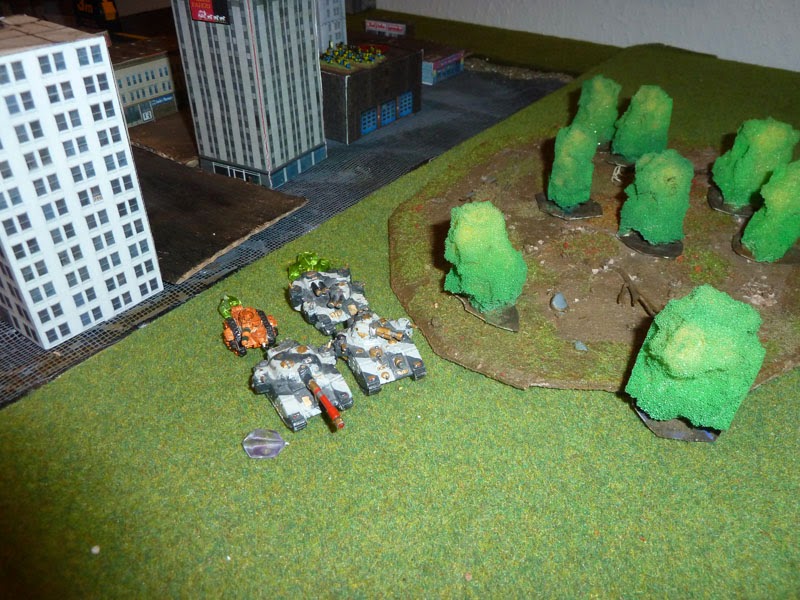 The sentinels try to active but fails (another one) and break. Flee away from the huge gargant.

The ork reinforcement is now visible just a few hundred yards away from Bigbellow. The only remaining hope of the imperial guard is the Basilisk battery. The guns thunder. The shells strike true, but the thick armor of the gargant save all but one. 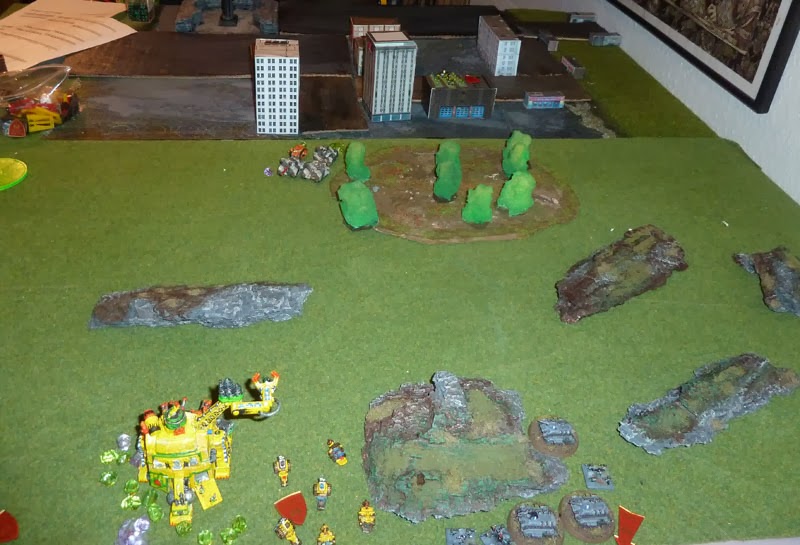 Well the idea was to see how hard a mega-gargant is. And it proved out to be hard as nails. Even without shields and immobile it was still in no threat of being destroyed. It had more than half it DC left at the end of turn five and the guns was a joy to see in action. It could clean a formation with some luck. On the other hand was the force that attacked it far from optimal and was ridden by a lot of ones (at least ten ones at critical moments). But as it looks now it might be restored and repainted to be a part of a Gargant Bigmob.
Posted by Peta at 11:15 AM