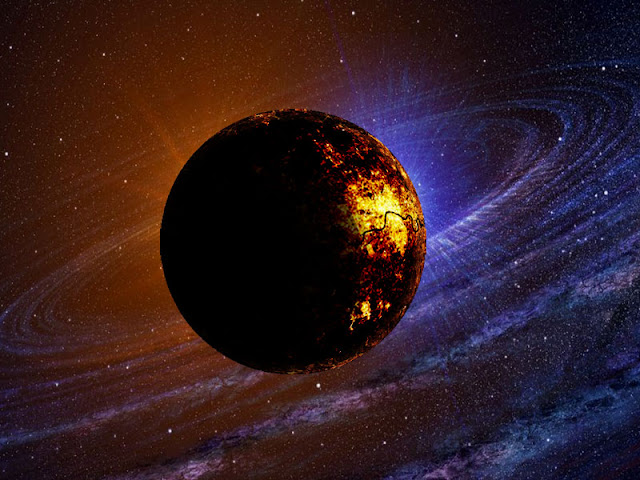 Visum Geata is the oldest inhabited world in the Gota sector. The legend tells that the planet was colonized already during the dark age of technology. There is no way to tell if that is true. No traces of pre mechanicus colonization has been found. However records of the planet was found on Mars during the age of strife and was selected as a target for one of the numerous titan legion fleets that was sent from the red planet.

The few remaining communication protocols in the huge data warehouses on Mars from Visum Geata tells a story of constant battles and pleas for help. The planet seem to be under constant attack from the ork tribes in the sector and to protect the forge world a perimeter of knight worlds was created. When the M30 was closing and the warp storms started to settle regular communication with Mars was again possible. Unfortunately did also the diminishing warp storms mean that it was easier for the orks to travel to and the word became the target for a gigantic Waaagh. The imperial annals tells about how the Night Lord legion reached the planet when the fighting between the orks and the titans where raging in the ruins of the factories on Visum Geata itself. With the titans losing meter by meter to the ever growing hordes of orks. The Night Lords succeeded to turn the battle by infiltrating arriving ork spaceships. Turning them into ghostly hulks with strung up orks all over them. Finally making the reinforcing orks to start to shun the space around Visum Geata. With the ork reinforcement stalling the legion could push back and cleanse the planet of greenskins.

The Night Lords left as soon as the Waaagh was crushed and the next note is a reply from the artisan counsel of Visum Geata that they where sending a full titan legion on the request of the Night Lord legion to the defence of Holy Terra during the Heresy. The fate of that legion is unknown, but it is believed that it was lost in a trap in the warp.

The Herasy meant that the contact between the Empire and Visum Geata was lost again. It is first in the M33, during the preparation for the Gota Crusade that the communications is re-establish. It seems like Visum Geata has been re-colonized their knight words before the crusade. Most knight words probably has a history back to M32. The task for Visum Geata and their Legio Geata and their knight worlds was an important one during the crusade. In the beginning they acted like a distraction in the ork back making it possible for the crusade to quickly advance into the Gota sector and create a supply line to Visum Geata. During the reminder of the crusade Visum Geata was responsible, as the only forge world in the sector, for rearming the crusading force.
Ever since has Visum Geata been the most important forge world in the sector. It has not always been the most productive. Especially during the over a century long servitor plague that, at times, killed over half of the planet servitors. But its age and history has always made it a focus point for the sector.
The forge world is ruled by an artisan counsel consisting of the most venerable tech-priests of the forge. They have full control over the planet and do not commonly accept disagreements. The population of the planet is often around two and a half billion. A bit depending of where you draw the line for a servitor and a habitant.

The forgeword is home to the titan legion Legio Geata. Visum Geata has however, due to some distrust from Mars, only access to older templates of the Warlord and the Warhound titan but is known to actively improve those sacred template to a degree that some in the Adeptus Mechanicus consider it a heresy.
Posted by Peta at 10:58 AM