A bridge to far?

The orks are retreating and the Empire has gather the troops for a counter attack close to Equistrus Minoris. The plan is to cut of the ork path of retreat back behind the Equistrus line and trap them in a giant encirclement against the ocean. But to successfully cut them of the bridges over the river Gotha and the North river both has to be captured intact to make it possible for the mechanized troops of the Steel Eagles to reach the coast fast enough. This delicate task has fallen on the Blood Angels and their captain Harianus.

The orks would set up two of the small mobs as garrison at each bridge. Then the Blood Angels would arrive on turn 1. From their edge. On turn two ork reinforcement would arrive on a roll of 3+. There was only two objectives, each of the two bridges. Victory points was checked at the end of turn three and turn four. If no one had won by then it was considered a draw. 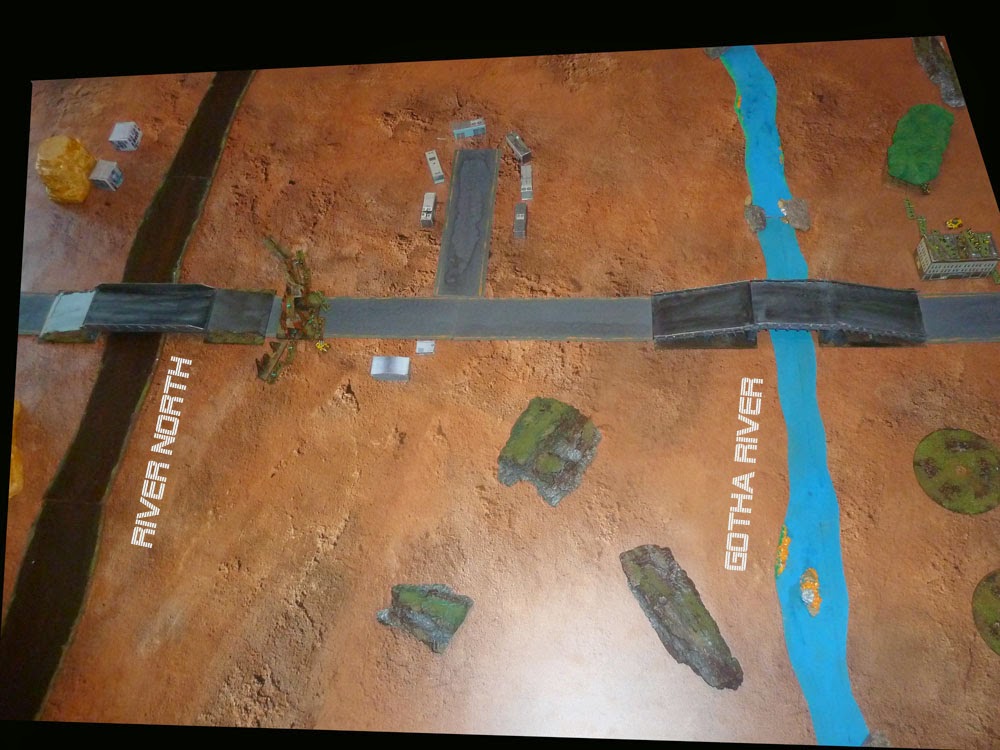 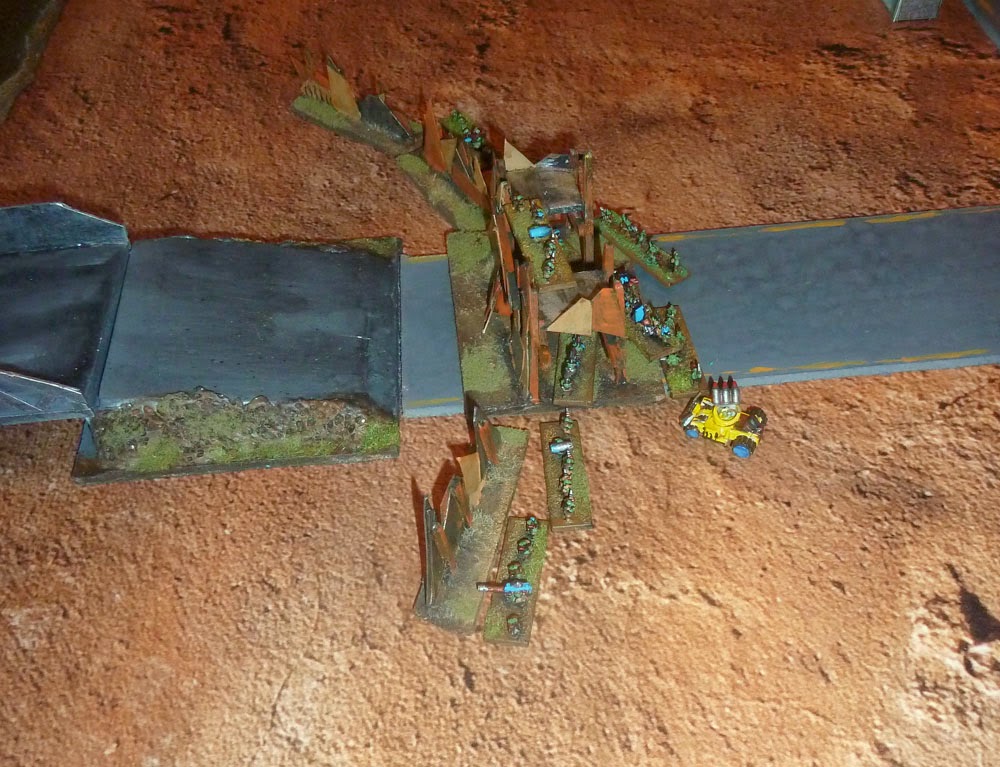 The ork guarding the North river bridge was doing their best to look like they was alert under the supervising nobs. In reality they were mostly trying to sleep in the hot sun. The last day has a few small coward bands of orks retreated over the bridge. They had spoken of a big battle in the east and that Wasnagga Bubbleboots had been killed. That was only their cowardliness that was speaking their nobs has decided. How could those feeble 'umis stop the mighty Wasnagga?
Suddenly one alert sentry noticed a few red dots moving towards the barricades in high speed. He shouted out a warning just in time to get most of the orks to get into cover before the Blood angle speeders hit the troops with deadly fire from their assault cannons. Pure luck limited the losses to a bare minimum. 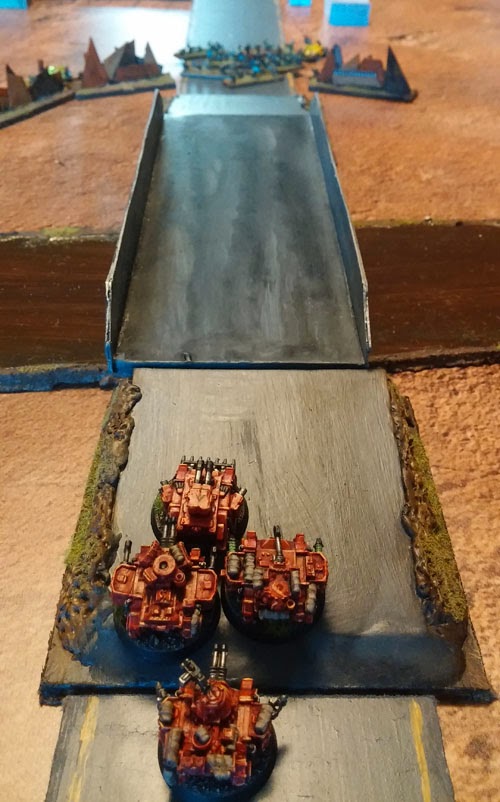 The orks respond by laying down a sustained fire against the skimmers. Blowing three of them from the sky and break the remaining two that run for cover behind some hills. The commanding nob immediately send out a small runner for reinforcement from the garrison on the other side of Gotha.

Seconds later a squadron of Predators comes advancing up the road. They lay a hailstorm of laser shoots on the defending orks. Targeting the barricades and succeeding in blasting a big hole in them.

The mob guarding river Gotha is alerted by the explosions and put them self on overwatch.

The blood angles advance their Whirlwinds and fire their rockets at point blank range at the orks at North bridge. But only succeed to kill a unit of unlucky grots. As if this was not enough, the orks can only look in terror as three landraiders double up the road and fire their laser cannons at them killing another units of orks.

Over the head of the land raider the Thunderhawk zooms in fire all their bolters at point blank range while the cowards in the ork flakkwagon only try to keep their head down. The Thunderhawk kill three units of orks, a grot and the coward flakkwagon. The orks defending the barricades had enough and flee back into an abandoned warehouse. 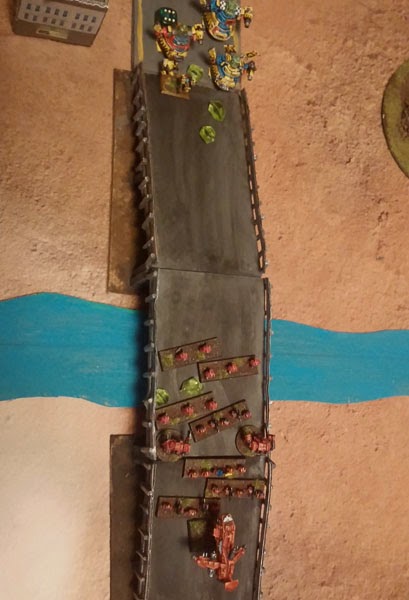 Width a sudden flash a great humming sound. A unit of Terminators appear on the Gotha bridge.

The orks wins the initiative

A unit of stompas lead by some deff dredds advance up the road with a lot of clonks and clanks. Their mighty battlecannons and bursts of shoota bullets however seems to just bounce of the Terminators. Killing only a single unit.

As a response the Thunderhawk flies in and drop off its load of devastators. All firing its missiles at the stompas. Killing two deff dreds.

The deadly fire is followed up by an assault by the terminators. With crackling powerfists punching through
steel and smattering assault cannons all the stompas and dreads is soon only smoking wrecks. The terminators had not lost a single man. 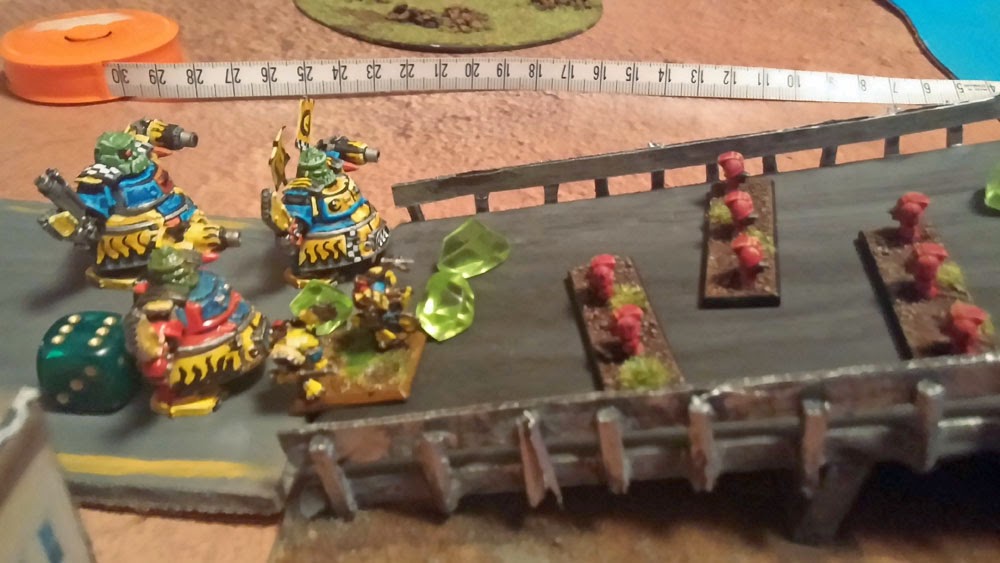 During the fight on the Gotha river a mob of big gunz from the ork reserve has advance onto the battlefield. The oddboyz strange rockets soars upon the devastators. Killing them all and one of the dreadnoughts. The orks are cheering loud at the sight of the mindless destruction.

But out on the wastelands between the bridges the remaining landspeeders kill all remaining orks from the North bridge while they try to make it to the Gotha bridge.

More orks however arrive from the reinforcements. The warlord Bizznozza himself and a big mob of orks engage the terminators on the bridge. They manage to drive them of with the non existing losses of three grot units but fail to kill more than one unit of terminators. Meanwhile clogging up the bridge for all other units.

With the North bridge cleared the Tactical company in their landraiders double up the road towards the Gotha bridge. 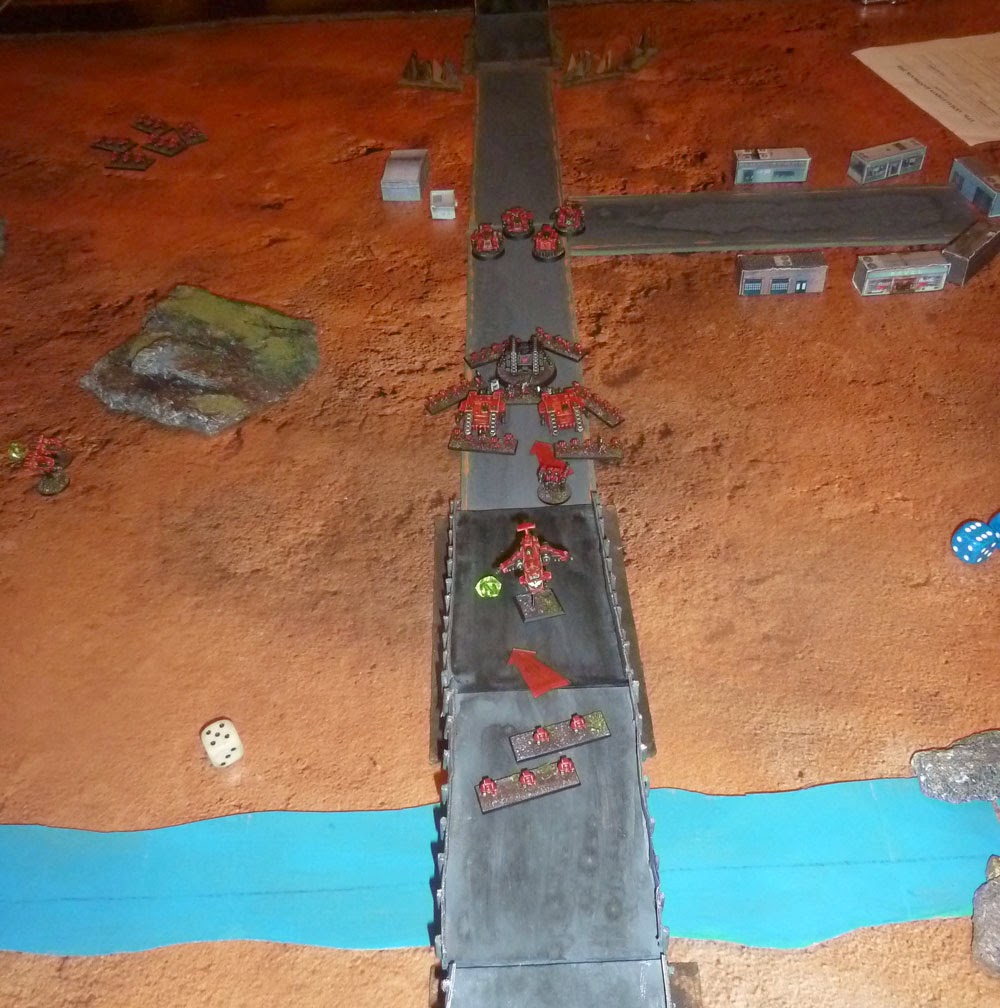 A small blizt brigade advance to the edge of river Gotha and fire a few pot shots at the Terminators but fail to even scratch their paint.

The Blood Angles bring up more troops by double their Predators along the road.

Meanwhile does the Gotha garrison advance to get closer to the terminators and fire all they have at them. Also failing in doing any damage what so ever. The orks grit their teeth.

The Whirlwinds lacking any thing to fire at also double up the battlefield and take position on the North bridge guarding it while now being in range of the orks.

Bizznozza has however called in his tank reserve and a big unit of gunwagonz advance into fire range of the tactical command across the river. Supported by a few oddboy sooparokkits. They kill five tactical units. But by sheer luck captain Harianus survive the terrible barrage.

The bike meanwhile march into a covered position close to the bridge.

Finally has the ork fighta bommas refuelled and with roaring jet engines they blast one of the hated Whirlwinds to scrap metal.

On the other end of the field a unit Kult of speed advance but is hindered by the mess at the bridge making it impossible for them the reach the enemy. Instead they decide to drive around in circles making a huge dust cloud just for the fun of it.

At the end of turn two does all units succeed to rally except the Terminators. 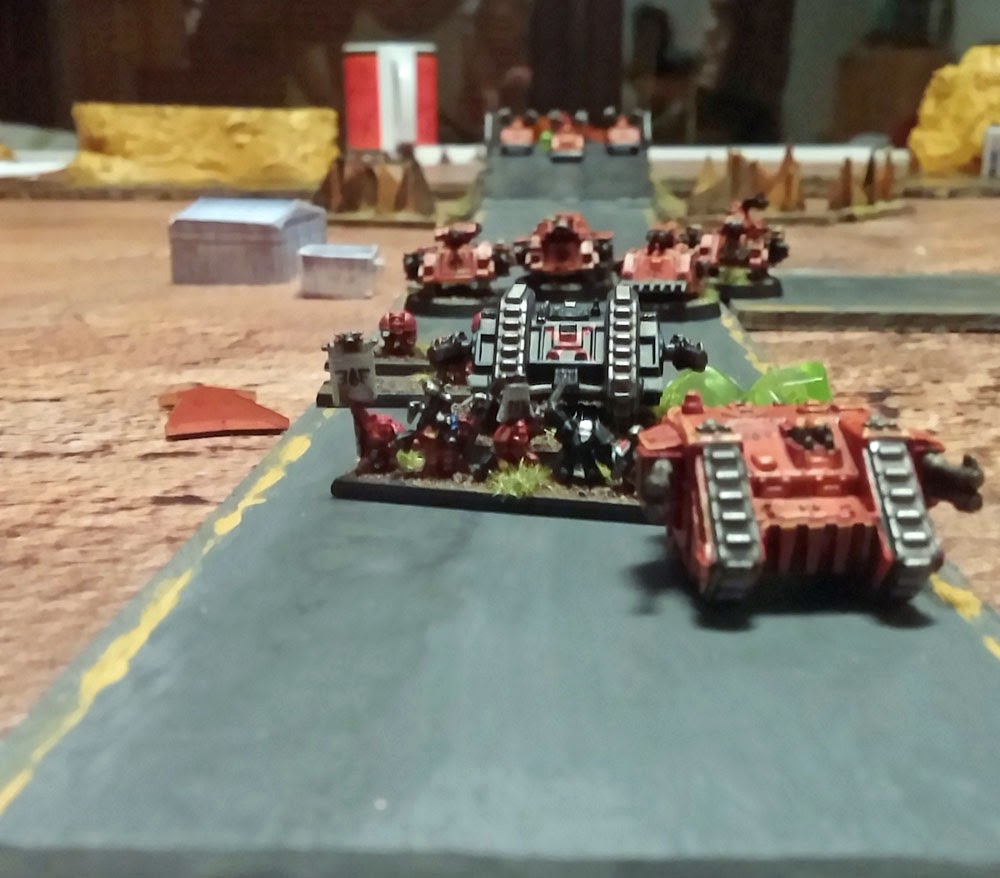 Turn 3 Blood on the battlefield.

They order in the Thunderhawk, but the machine was grounded due to a malfunction engine from the blast that hit it last turn. (double 1 rolled)

Instead the Big blitz brigade sustain fire with their sooparokkits on the landraiders. Destroying 1 landraider and a dreadnought that happened to be a bit to close. 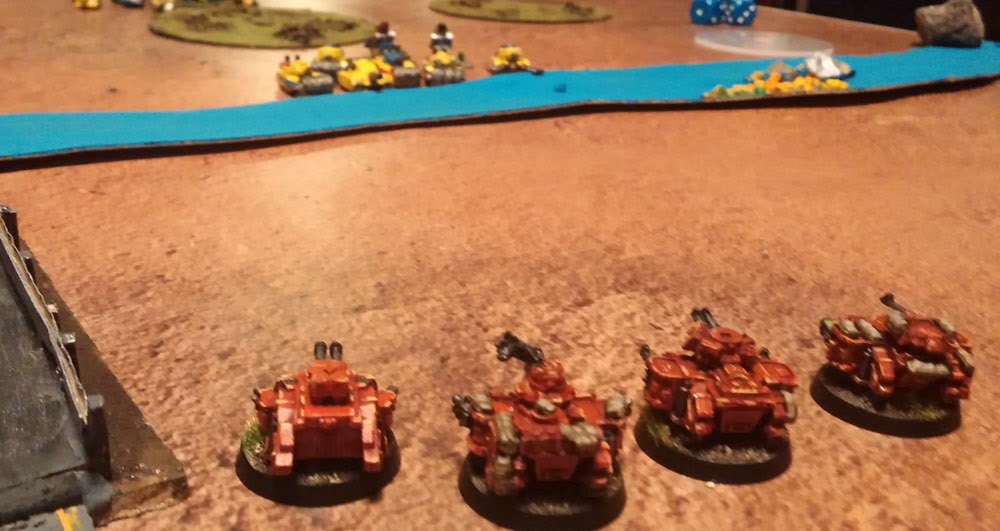 The big warband on the bridge has to get out of the way and double forward while firing their guns on the Terminators. Fail to kill any.

They are instead hit by the rockets from the Whirlwinds that kill four units of orks and two nob units. Leaving the mob badly bloodied. 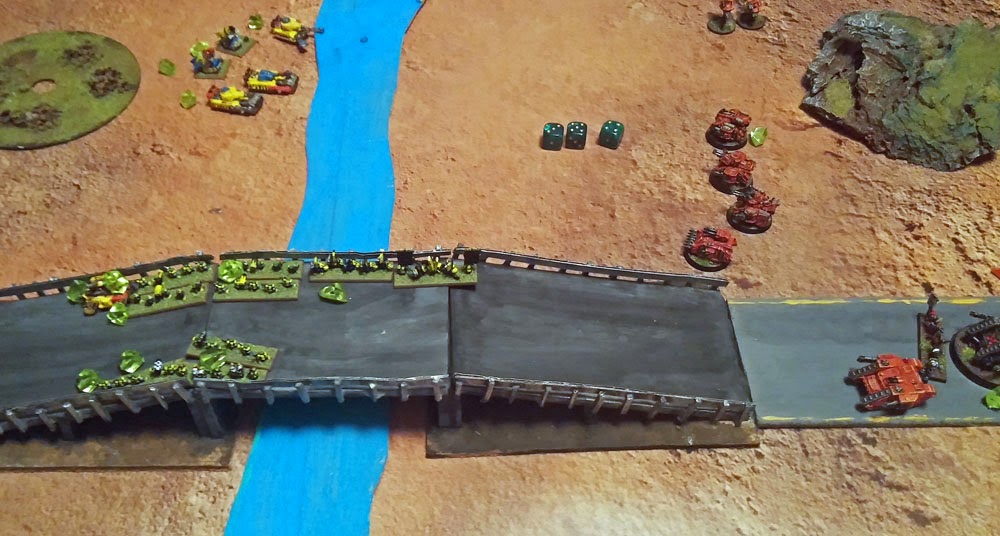 This is followed up by the bike engaging the orks at fire range. Killing another unit of boyz and nobs. But the orks aim is good and all but one bike unit is killed.

The lack of orks on the bridge make it possible for the Kult of speed to double over the bridge while firing at the Predators destroying one of the tanks. 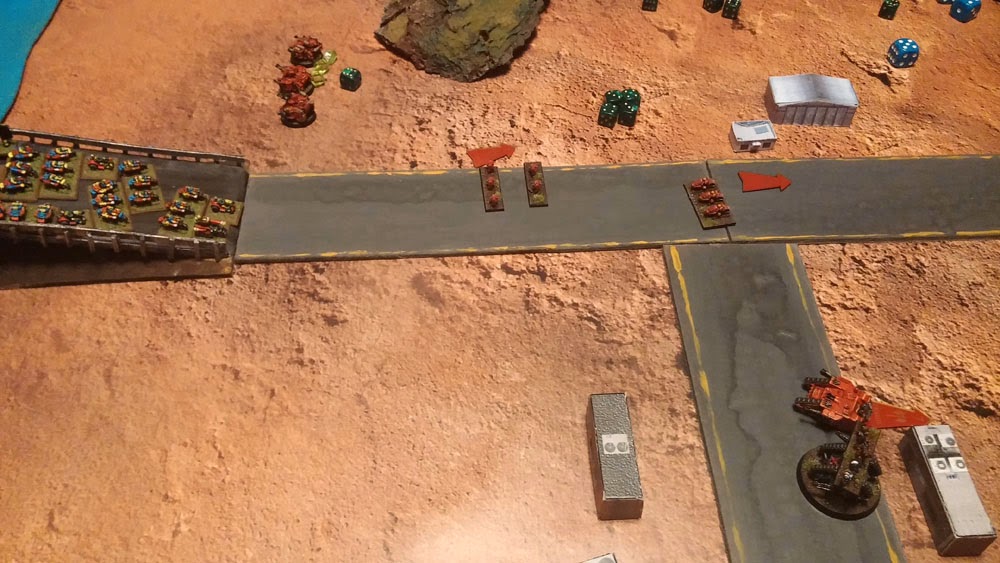 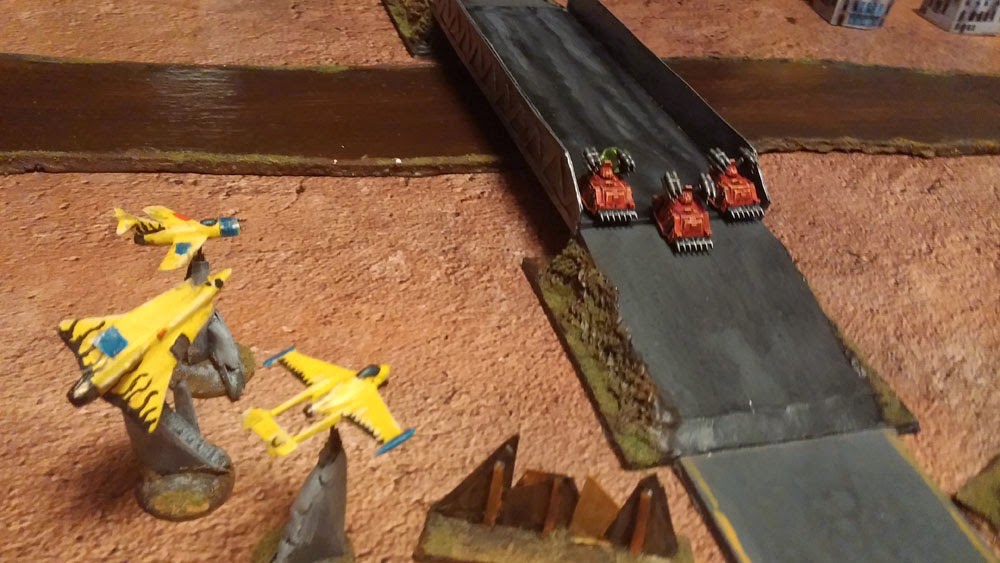 The small blitz brigade retain the ork offensive by fire some ill guided shoots at the tactical command. Failing to do any damage but the pure weight of fire taken by the tacticals cause them to brake and they flee to the relative safety of some warehouses. 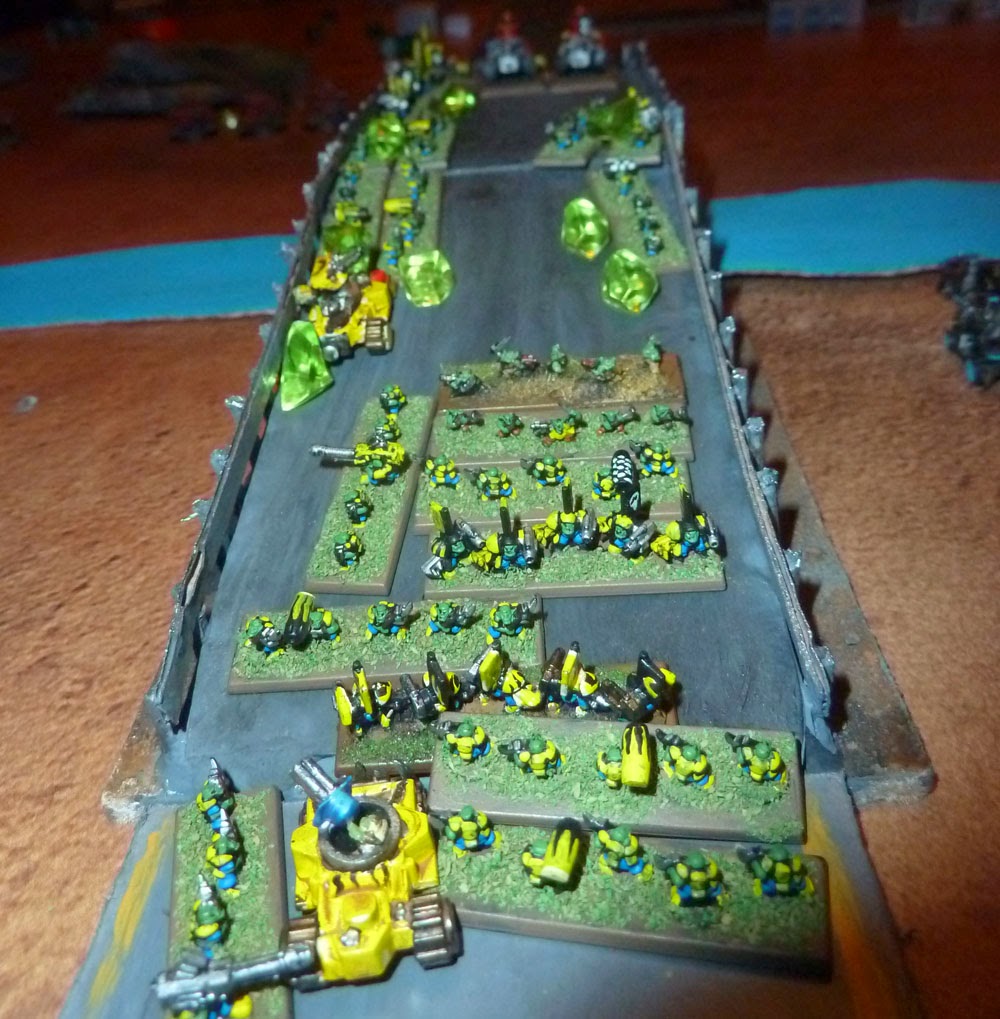 On the other side of the road the landspeeders fire at the big blitz brigade. Also fail to do any damage but deorganize them enough to break their morale and they retreat.

And once again does the fighta bommas roar unhindered over the battlefield to kill one of the Whirlwinds.

In the end phase does all units but the bikes rally.

The orks hold the Gotha bridge and the Marines the North bridge so the game continue one more turn.

Turn 4 All or nothing

The ork wins the initiative 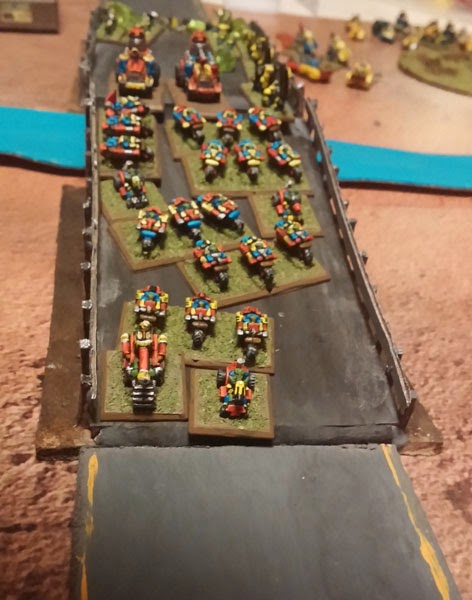 It looks pretty good for the orks. All they have to do is zoom forward with the Kult of speed to recapture the North bridge. They just have to remove the Terminators blocking their approach lane first.

The fighta bommas once more attack the whirlwinds failing in killing any of them this time.

At the Gotha bridge, the big gunz double up to the riverbanks and fire at the newly rallied Terminators. But even the mighty sooparokkits of the oddboyz fail to hurt them at all.

This gives the Predators the opportunity to sustain fire at the impatient Kult of speed destroying two units of bikes and two buggies. 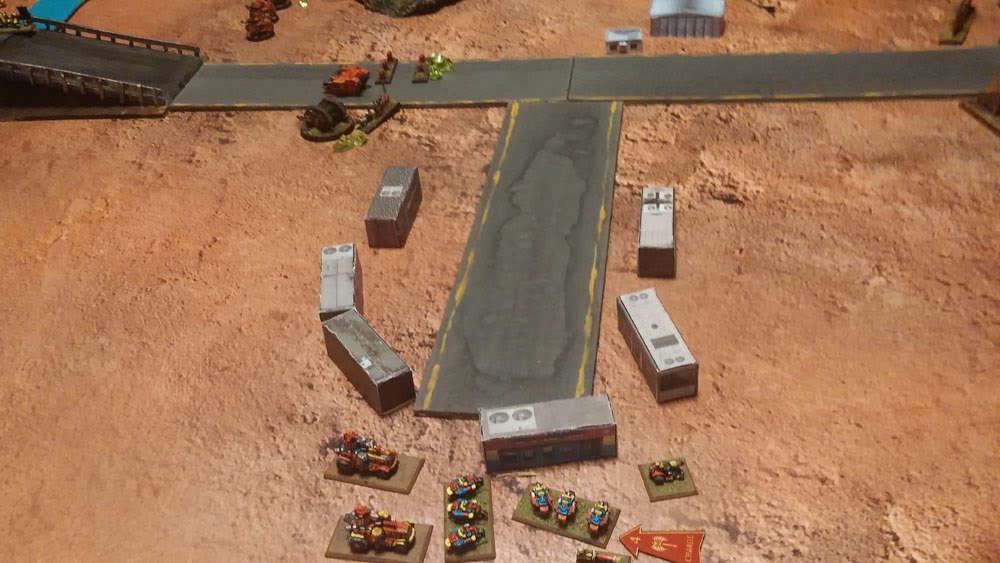 Followed up by fire from the landraiders in the tactical command. Killing another two units of bikes. Break the Kult and they retreat forwards behind some warehouses.

To late does the fire from the blitz brigades finally break the terminators and they retreat.

At the North bridge does the only functional Whirlwind fire its rocket at the big mob and succeed in killing a unit of boyz.

The small blitz brigade sustain fire at the landraiders but fail to do any damage. 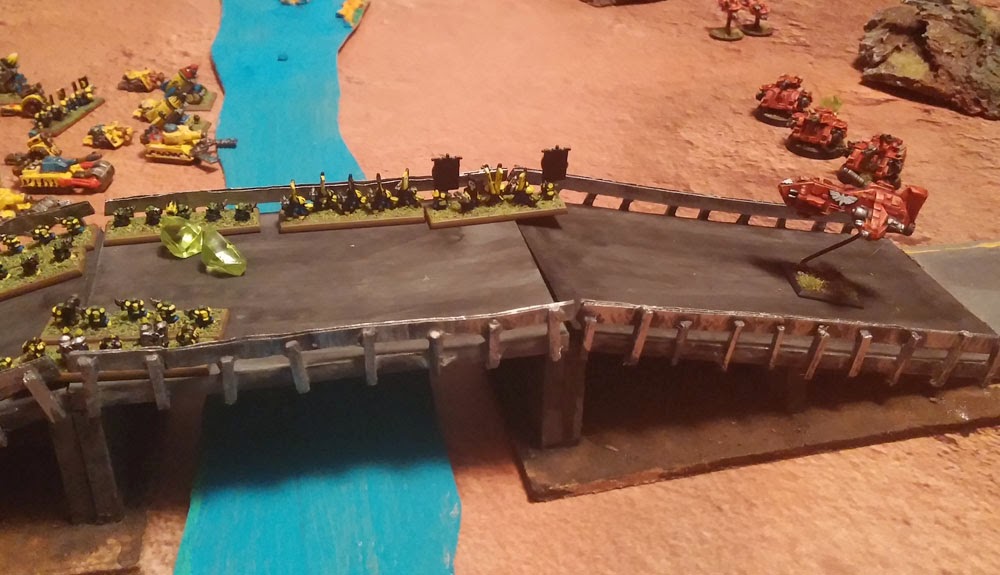 The orks still hold the Gotha bridge and started to adapt explosives to blow the bridge in the air. But they have totally forgotten the Thunderhawk that land on the edge of the bridge and kill a unit of nobs and what’s worse Bizznozza himself.

Simultaneous does the landspeeders fly up on the bridge itself fire their cannons at the big mob, killing just a grot, but the fire is enough to break the mob. Forcing it of the bridge.

The only unit the ork now has left is the small mob that should garrison the bridge. They have to get rid of both the landspeeders and the thunderhawk at once. An impossible feat even for an ork. They engage the landspeeders. Killing them both in exchange of some grots that happen to be pushed over the reeling by the eager orks. But the threat of the nearby Thunderhawk make it impossible for the orks to adapt the explosives. And the time is out. At the North bridge has already the vanguard of the Steel Eagles arrived. The losses has been huge for the Blood angles but the road to the ocean is open. 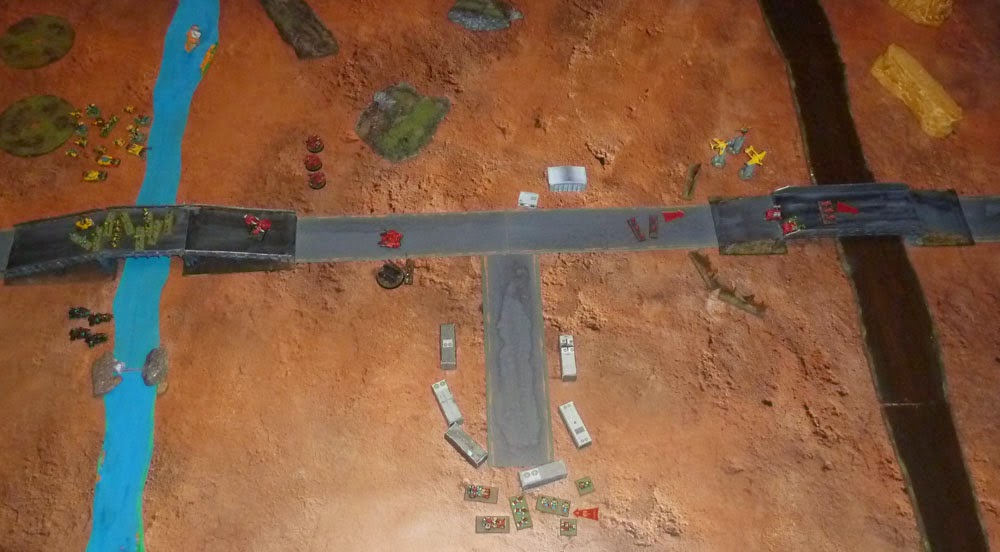 The marines win by holding one bridge and contesting the other.