The  spring assault by Wasnagga Bubbleboots has completely smashed the defenses at the Equistrus front. Wasnagga is now driving the desperate planetary defense force together with the steel eagle legions before the furious orks. Hive Agnebergus is seriously threatened. A plea for help has been sent to the High Command in Holmus system. As response a complete company of Blood Angels has been sent to stay the green tide. The Blood angels, to few to help in the front battles, judged that their best tactics would be to slow down the flood of reinforcement of eager warlords from the ork controlled area that want to join the battles. Thereby letting steam of the retreating legions giving them a chance to regroup and dig in.

A horde of orks under the warlord Grok Hugechoppa moving towards the front became the first target. A small mobile task force under the command of the chaplain Tapperus Maximus was tasked with destroying the orks. The space marines should use their mobility, hit hard, hit fast and disengage hopefully leaving the orks retreatings back toward the ork controlled areas.

The orks set up with all the big gunz in the forest the rest forced to set up in the open. Trying to avoid intermingle. The Blood angels hid their whirlwinds and their devastators behind two houses. The rest in reserve. 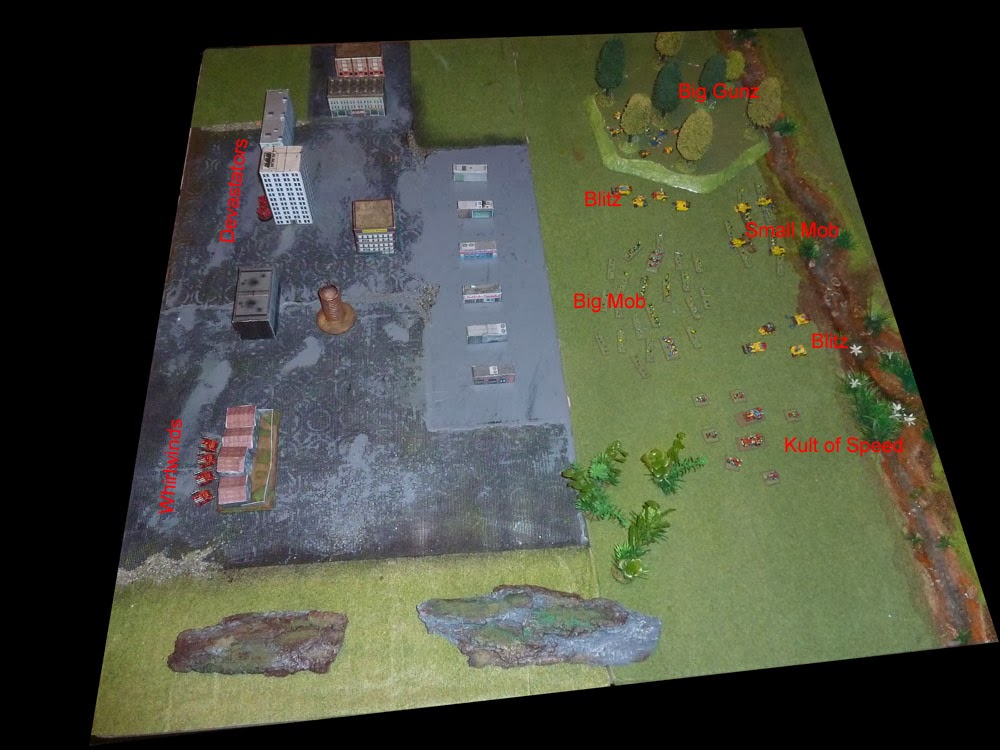 Blood Angels automatically has initiative.
Blood Angels Teleport in the Terminators in front of one of the Blitz brigades. 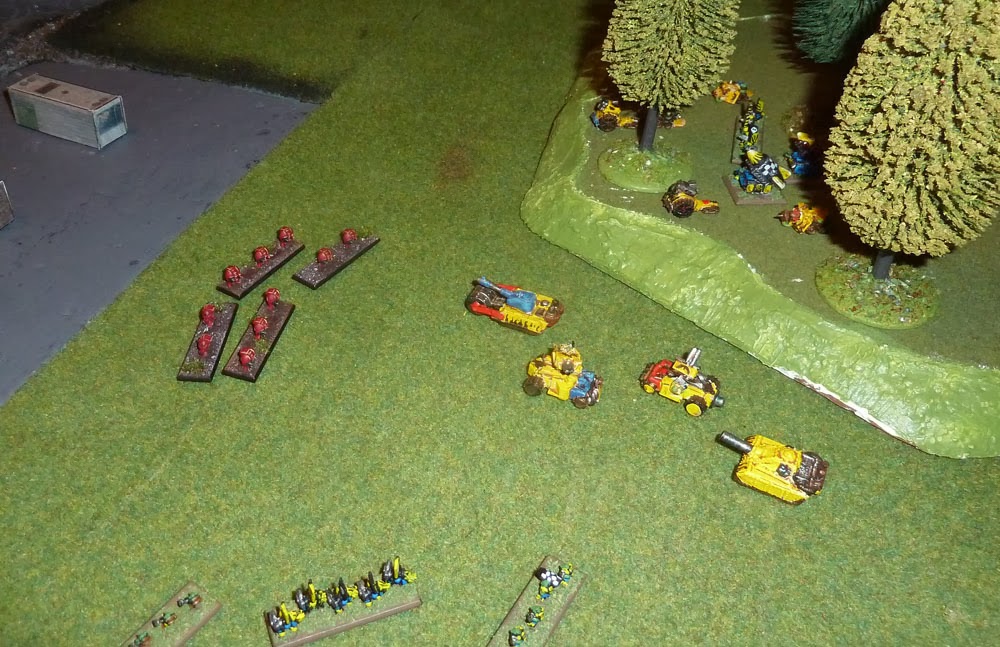 The Whirlwinds fire at the Big mob killing seven units
Terminators retain the initiative and kill three of the gunwaggons in the Blitz brigade. Thereby stripping the orks of half their flakk protection. 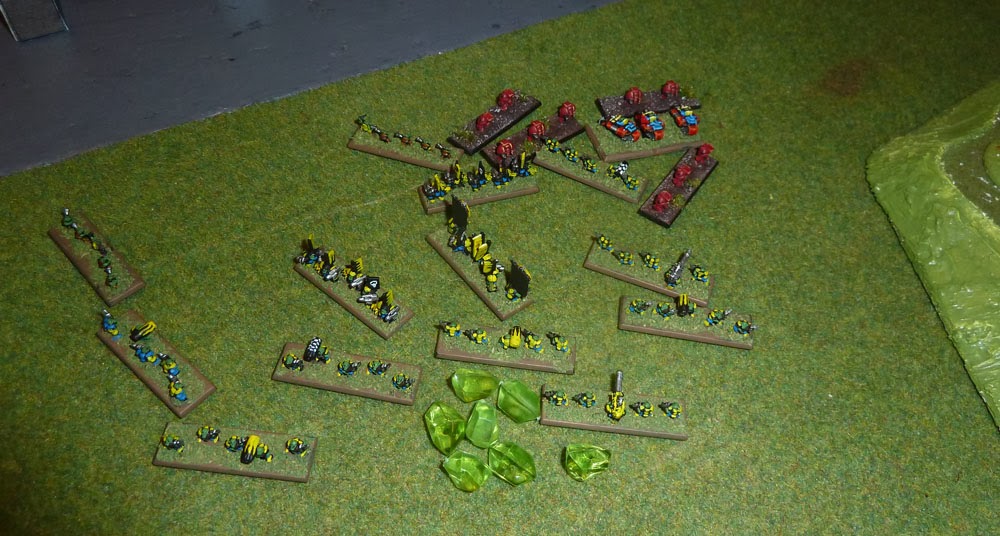 The onslaught enrage Grok and he command an assault against the small squad of terminators. But their shells just bounce of the terminators thick armor, killing none, loosing almost half the unit and flee in the process. 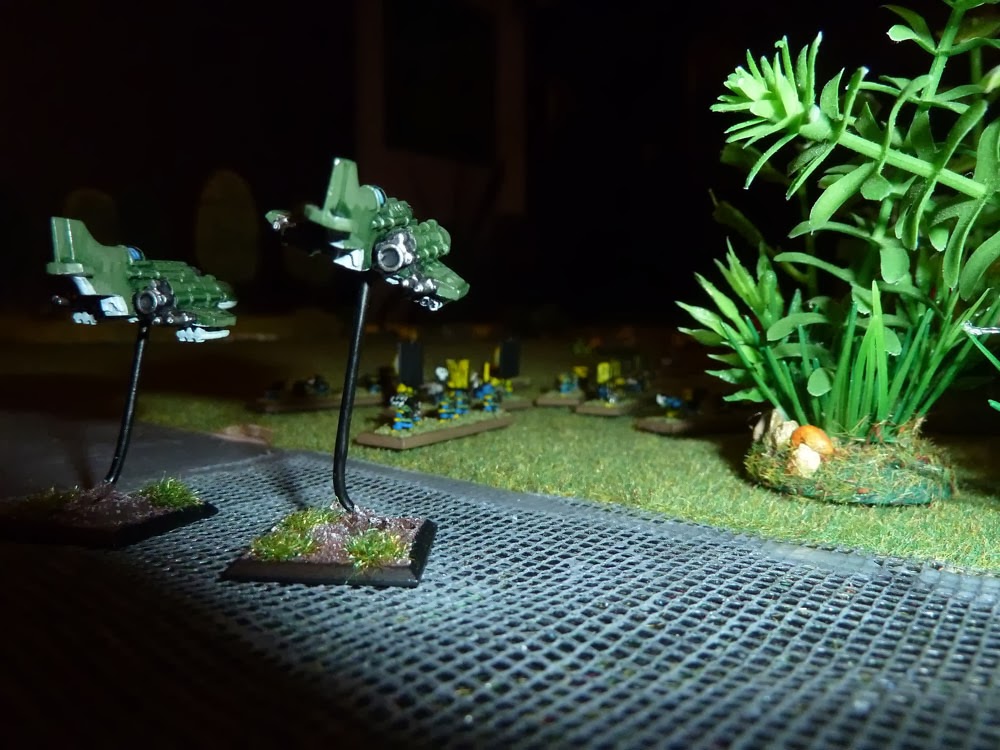 The space marine send in the Thunderbolts trying to kill of Grok while he is fleeing but only succeed in killing a grot. Who cares.


The Thunderhawk try to get rid of the remaining flak at a safe distance but fail to do any damage,

The big gunz in the forest order a sustained fire at the terminators in front of them. The normal shells just bounce of the terminators but the mekboy megarockets strikes true and kill three units of terminators. Throwing the remaining unit in a disorganized retreat.

Recognizing the threat from the big gunz the devestators double up and fire their heavy weapons. But the fast advance and thick forest made the otherwise accurate space marines to fire wide and not killing any of the gunz. 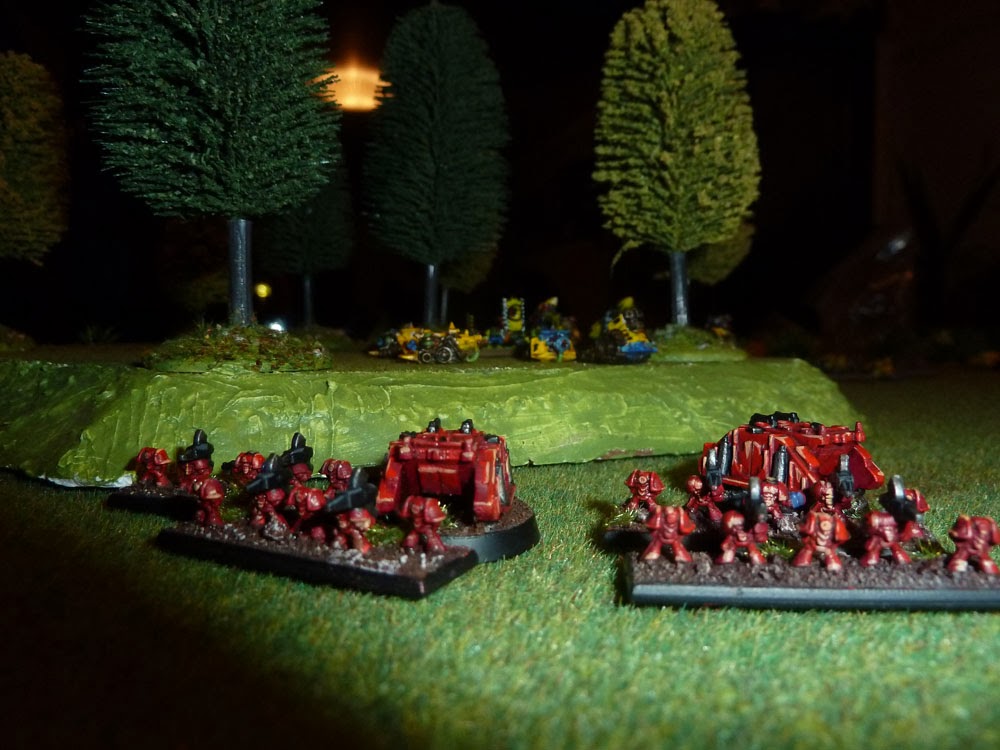 The orks try to advance their flakk in the surviving blitz brigade forward towards the threatening thunderbolts and thunderhawk, but fail to get the order.

Instead the kult of speed double up and putting the exposed devastators in a crossfire between them and the big gunz. Still only killing a single devastator.

Wanting to join the fry the nob leading the small motorized mob also double up fire all their gunz at the rhinos destroying both. 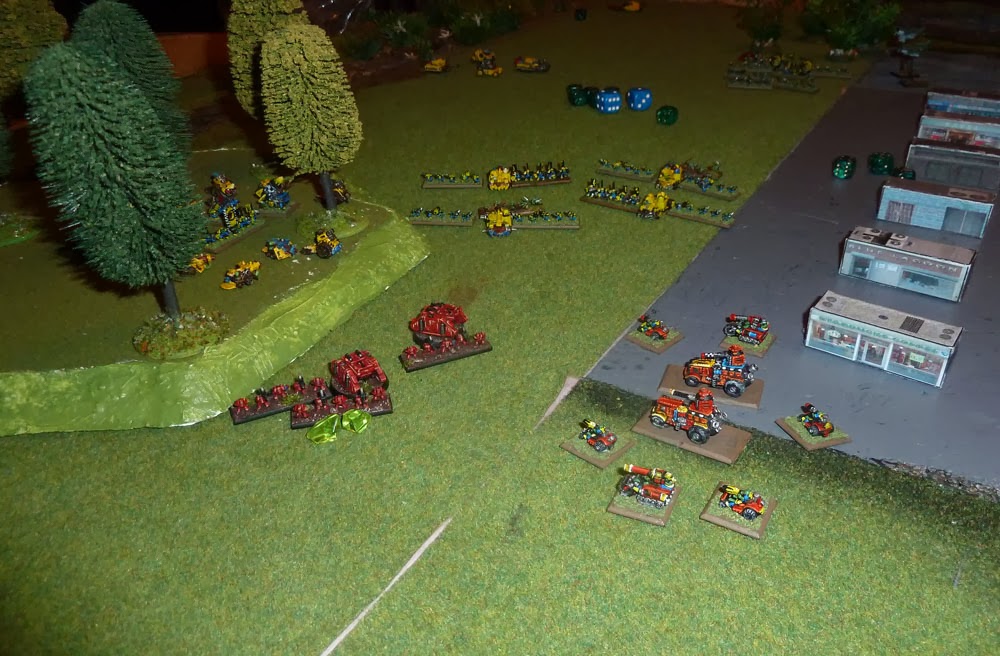 The thunderbolts pass by the flakk gunz in the blitz brigade and both get shoot down. The orks are cheering.

Devastator reorganize and the Terminators rally. The orks however fail to get rid of their blast markes and the big (now small) mob of Grok flees to a small wood.

Blood has been shed on both sides. The Blood Angels Terminators has taken a lot of beating but given a lot to. But the moment of surprise was over, orks win the initiative. 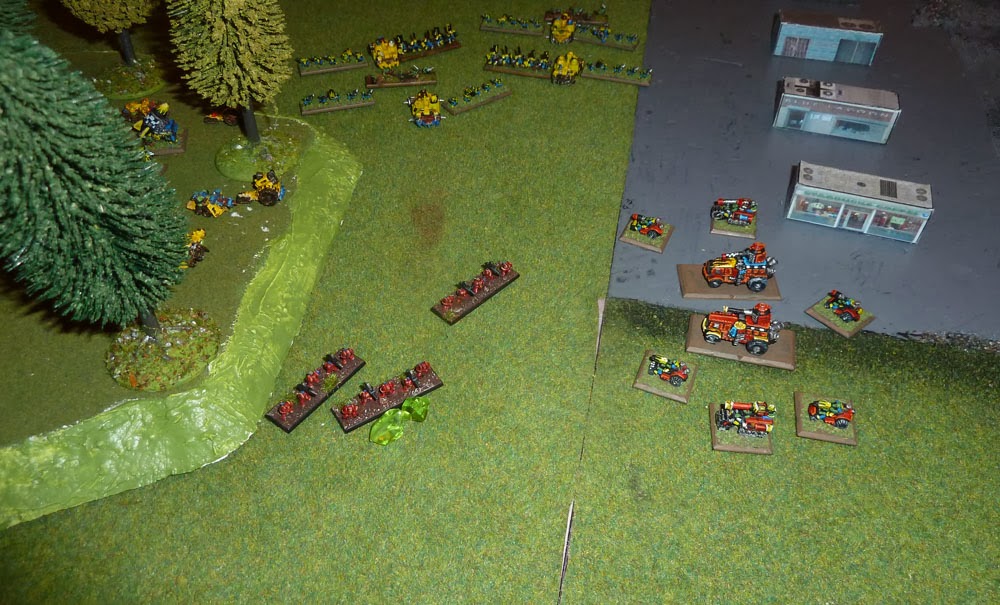 The small mob of orks sustain fire at the devastator in the middle of a crossfire between them, the kult of speed and the big gunz. Killing them all. 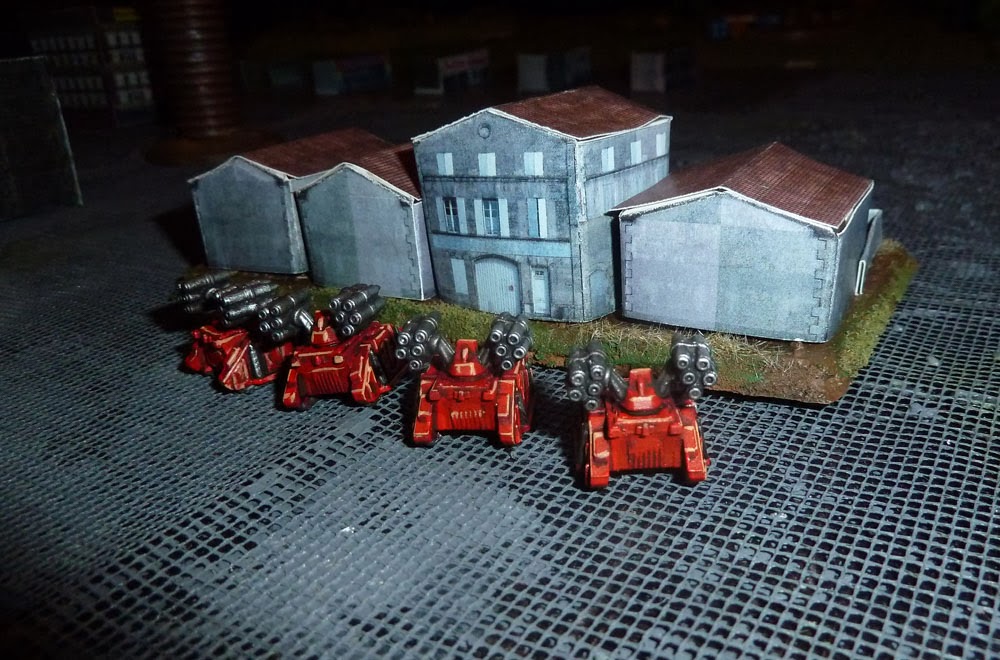 The space marines revenge with fire all their whirlwinds rockets at the motorized mob. Destroying two of their battlewaggons and killing several orks. Breaking them.

The space marines try to retain the initiative with the thunderhawk. But the big engine is still reloading marines and fail to show up.

Instead the kult of speed engage the single Terminator. Killing it without taking any casualties.

Lacking anything to shoot the big gunz in the wood put them self on overwatch, hoping for something fun to show up. 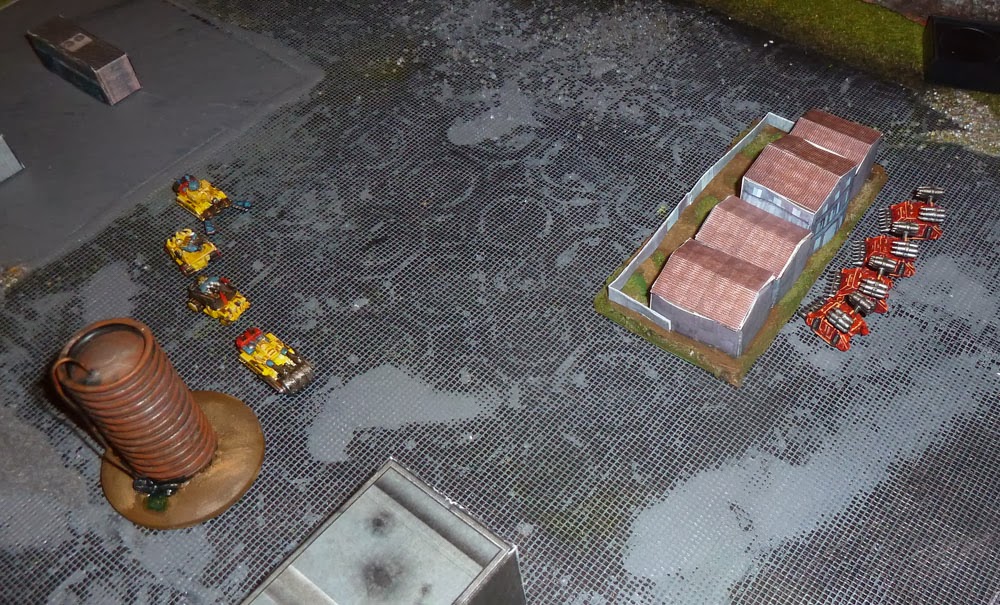 The remaining ork blitz brigade double up the field hoping to reach the whirlwinds before they can fire again.

All rallies, that include Big gunz, Big mob, small mob and the remaining gunwagon from the other blitz brigade.

Things are starting to looking grim for the Blood angels. Both their terminators and their devastators has been destroyed. And their target are actually advancing towards them, not fleeing in panic. Something has gone wrong!

The Blood Angels win the initiative.

The thunderhawk is finally loaded with a tactical company under command of Tapperus Maximus. The thunderhawk set down just in front of the blitz brigade. Gunz smattering against its tick armor. The tacticals disembark led from the front by Tapperus that personally smash through the thick armor of the closest gunwagon with his mighty powerfist. The rest of the gunwaggons and flakk waggons of the blitz brigade is destroyed by the accurate shooting of the marines. 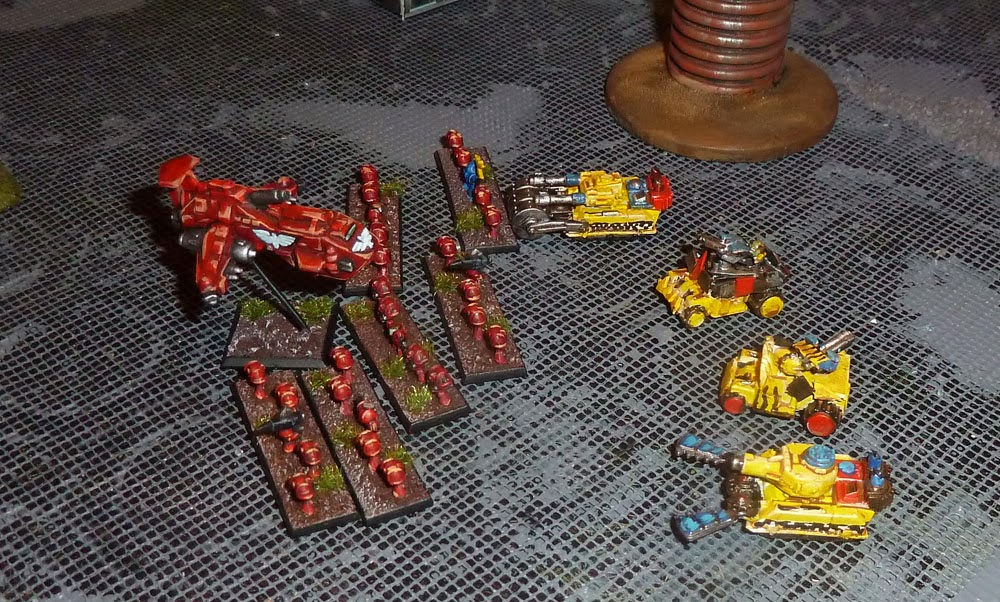 The plan was to follow the devastating attack on the blitz brigade with a bombard on the nearby kult of speed by the whirlwinds. But the whirlwinds had problem getting a target lock on the small buggies. (a one was rolled). And the buggies instead can double towards the tactical marines, all shells miss or fail to wound any of the marines. But the marines in the front, including the brave Tapperus Maximus was engulfed in the fire from the two bowl burnas.

The orks now have to choose, shall they flee the field while till on top, or shall they press on and try to damage the Blood Angels even further? They are orks so the decision is easy.

The remaining small motorized mob double up the field catching the tacticals in a crossfire, but do no damage to them. 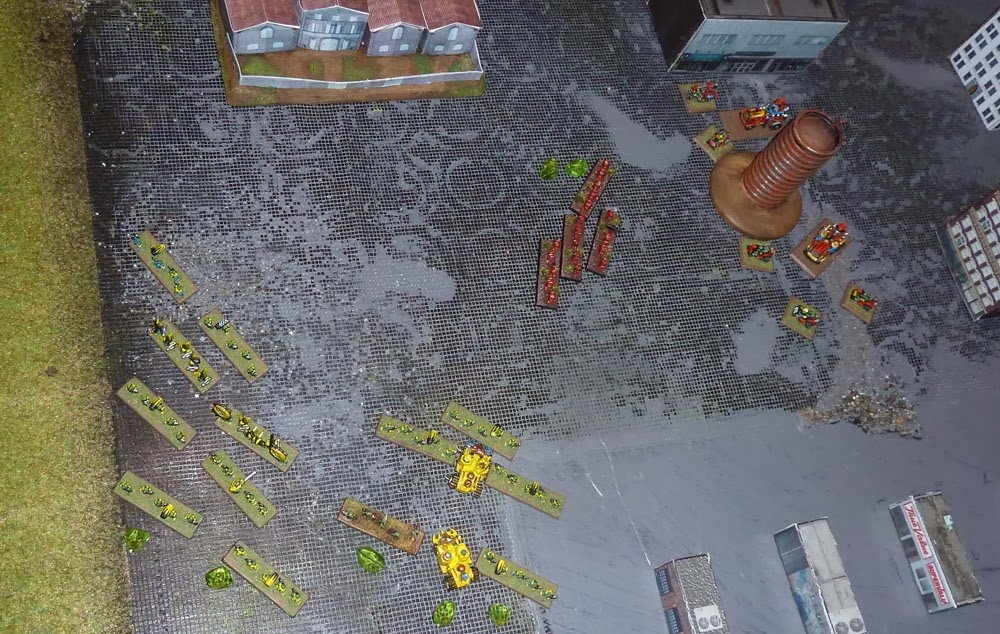 Groks now heavily decimated mob leave the forest where they have regrouped and try to do the same. They kill one tactical unit.

The thunderhawk take of and leave the tactical marines who try to rally but fails, surrounded by orks on all sides.

The raid has turned into a nightmare for the marines, but still is not all lost. The orks has taken heavy casualties and are driven into battle frenzy. If just enough could be killed for the mission to be saved.

The whirlwinds start to fire at the tightly clustered mobs, breaking one but not the one led by Grok, this will be devastating for them.
Even worse for the marines, the thunderhawk fail to return to the battlefield (another one rolled). 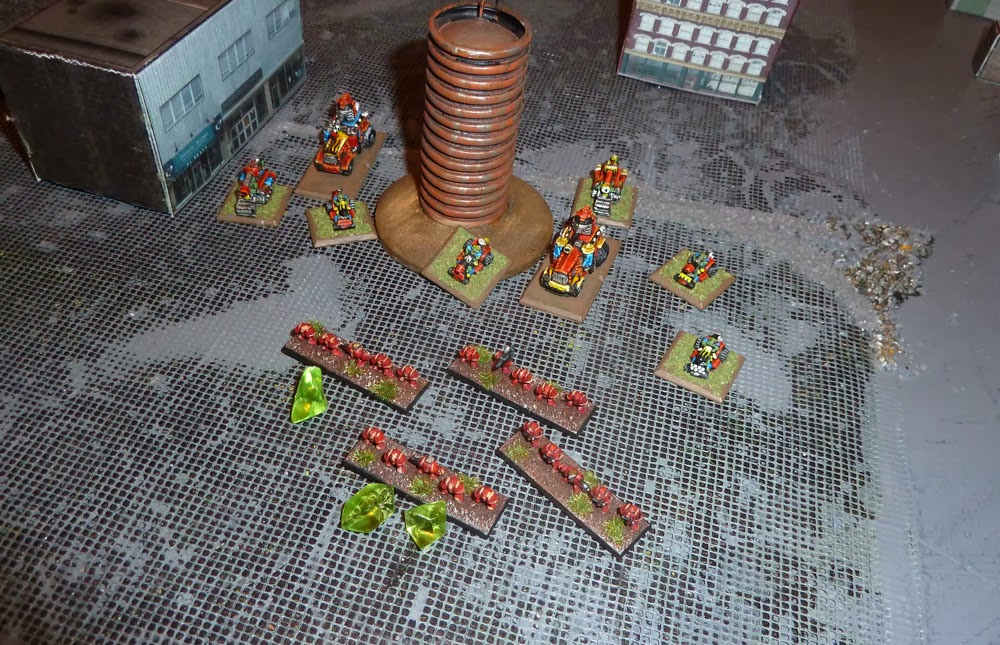 Grok marshal his mob, beating the orks back into line, while slowly advancing towards the whirlwinds hiding behind the houses. Meanwhile the kult of speed retain the ork initiative and engage the tactical marines in close fire fight. The deadly bowlburnas spew out their cones of fire, toasting marines. When the bolters had stop firing no marine was left standing and only one buggy had been lost.

The big gunz in the rear has meanwhile realized that there is not much for them to shoot at so they start to move towards the edge river crossing leaving the battlefield. The lone gunwaggon from the remaining blitz brigade do the same.

The small mob of only three remaining orks fail to rally and flee towards the river crossing. The kult of speed also fail to organize. 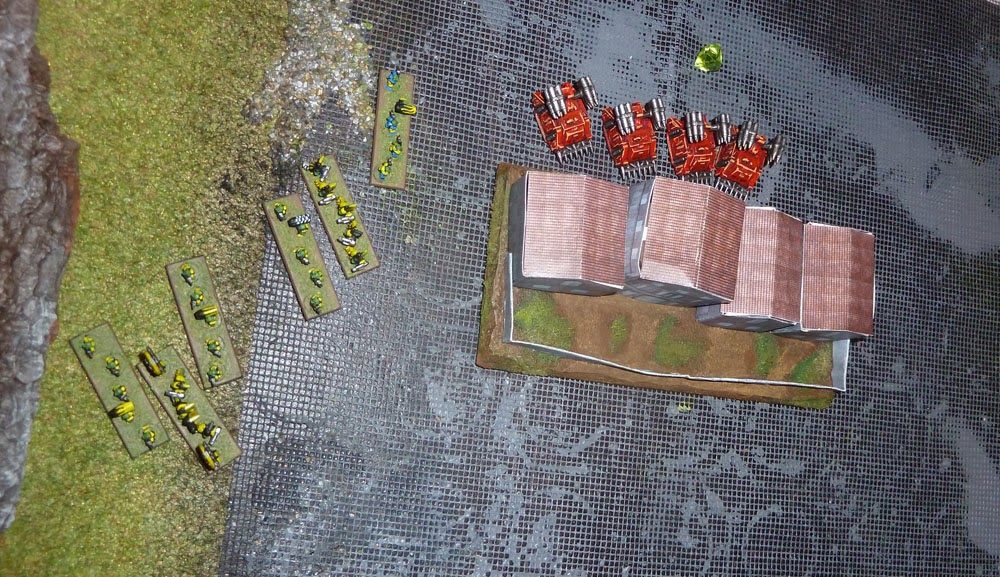 The marines has not much left now but their honor and decide to fight to the bitter end.
The thunderhawk swoops in and kill one buggy in the kult of speed. Followed by a hell rain of rockets from the whirlwinds killing another two, breaking the kult and send them fleeing towards the table edge.

Groks mob advance towards the whirlwinds fire their big shootas but fail to do any damage. 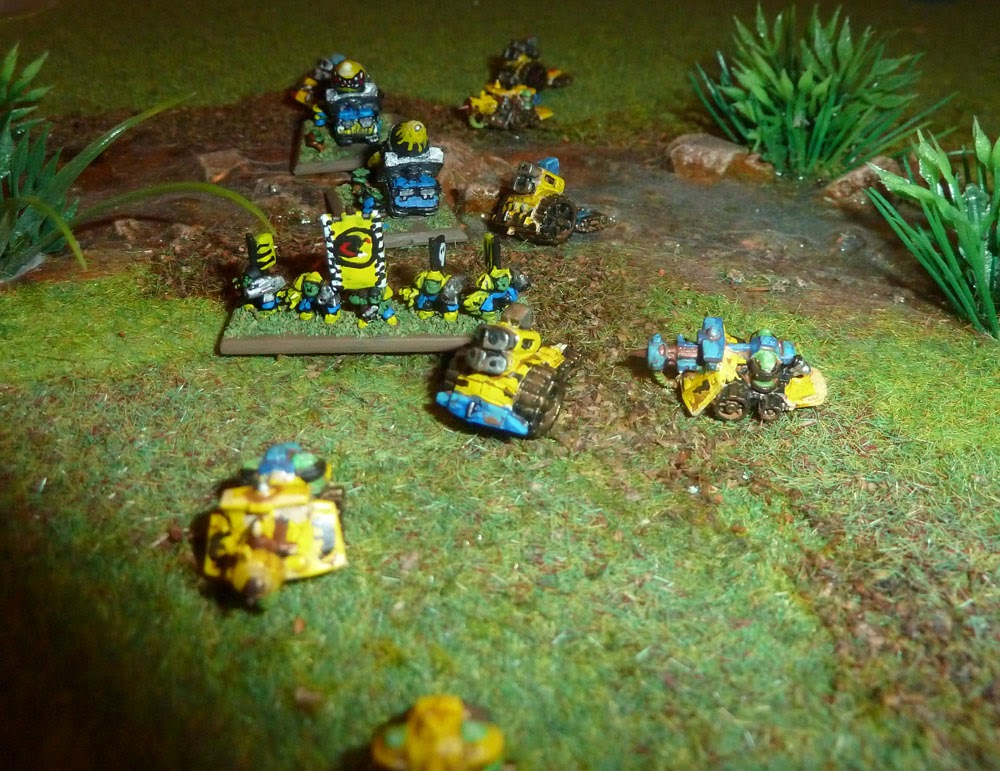 Meanwhile the big gunz leave the battlefield across the river.

To the marine great disappointment all broken orks rally.

The whirlwind fire at the remaining three units of orks in the small mob. Hoping to wipe them from the surface of Agnebergus, but only killing one of them, breaking the unit again.

This however left the mob under Groks command undamaged and in engage range of the whirlwinds. The orks swarms the whirlwinds with choppas and sluggas. Fire into the hatches and ripping them apart with powerklaws. Destroying every one of the dreaded machines that has caused so much killing among the orks. There after consolidate into the nearby houses to avoid the expected retaliation from the thunderhawk. 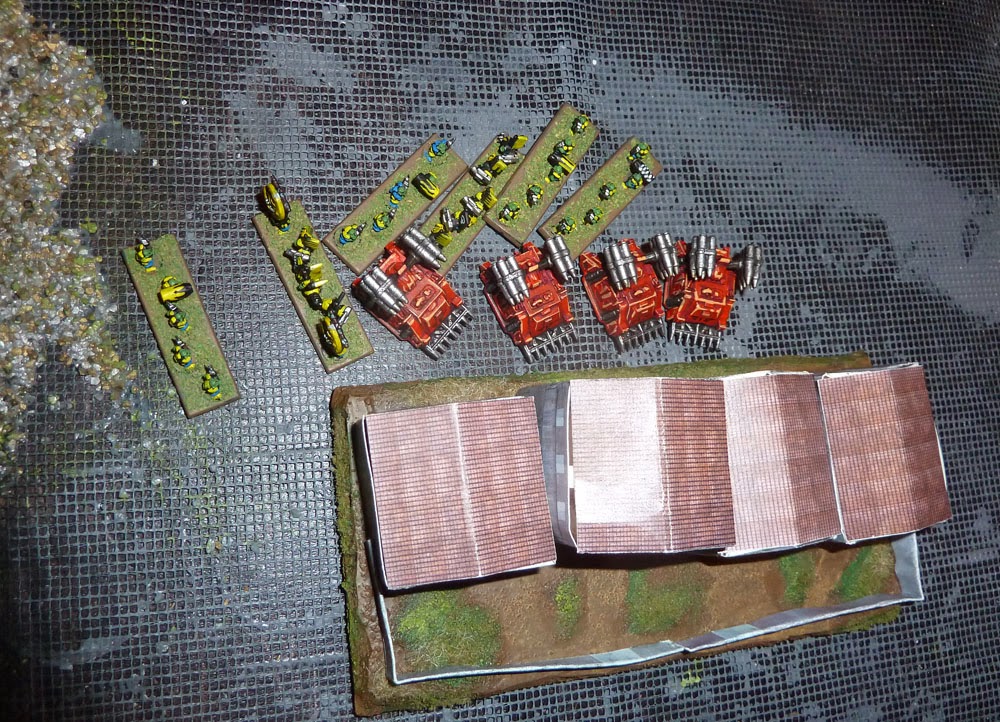 The kult of speed leave the battlefield

The thunderhawk swoops in and decide to attack the fleeing small mob instead of try to gun down the fortified orks in the houses. They succeed and kill all remaining orks in the small mob. 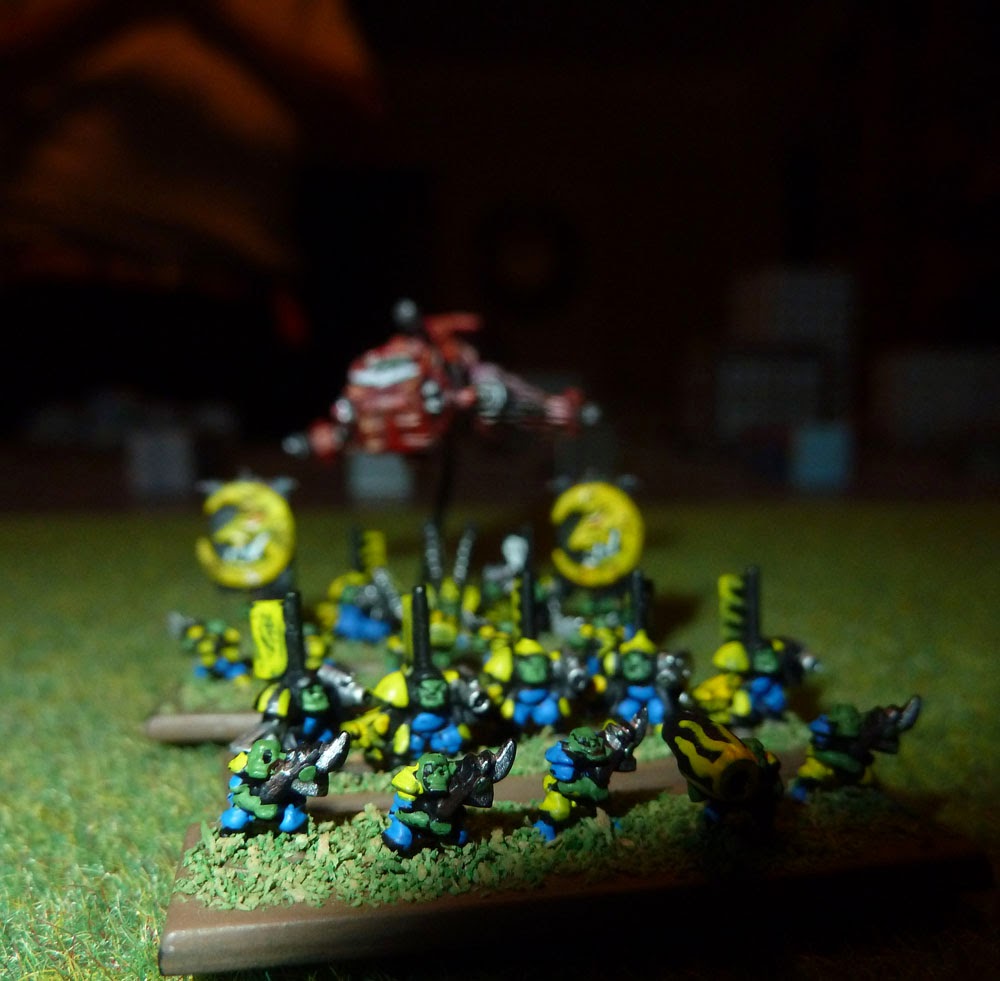 The small group of orks under Groks command is the only one remaining on the battlefield. They are under constant attack from the dreaded thunderhawk. Trying to move fast from building to building they get to the edge of the settlement. In front of them is the open grass land. Above them the rentless thunderhawk. They have to make a run for it. The thunderhawk swoops down. Strafing the running orks. Killing two units. They break, running disorganized towards the river. But Gruk put back discipline at the riverbank by killing some running orks and the remaining handful of orks march across the rivercrossing in good order. (thereby denying the space marine full victorypoints for the big mob)

The game ended with orks 1400 vp, Blood Angels 975 vp. A fairly good victory for the orks.

It was a bad day for the Blood Angels. Not only did they fail in stopping the ork reinforcement they also took heavy casualties. Not the least the brave Tapperus Maximus.
The space marine players made some brave but in afterthought wrong decisions to put the Terminators, and thereafter the devastators in an exposed position. A couple of ones in the wrong moments making things worse. Who would have guessed that you would miss a commander reroll in a 1+ army. In retrospective the Terminators might have been better deployed later after the whirlwinds had broken up the orks a bit better and supported by the thunderhawk and the tactical marines. The orks might on the other hand been better off withdrawing their forces on turn three instead of pushing on to minimize their losses.